Priced at Rs 8,990 the Tecno Mobile Camon I will be available across Tecno Mobile’s offline retail outlets only, up against the Redmi Y1 and the Honor 7X. 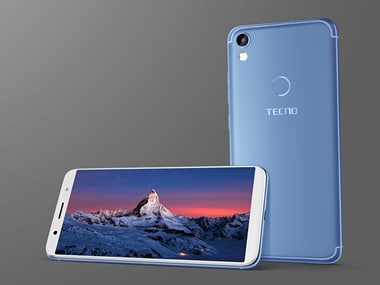 With Tecno Mobile, Transsion Holdings aims to enter the premium budget smartphone segment and having launched the Camon I, the company does seem to have a set direction in which it wants to tread. Priced at Rs 8,990, the Camon I is no short of competition. Be it from the likes of big names such Xiaomi and Honor to the likes of brands such as InFocus and Smartron.

The primary highlight for Tecno Mobile’s Camon range of smartphone’s is the emphasis laid on the camera and the display. While we have smartphones with 18:9 displays in this segment, the camera quality is usually a factor where sub- Rs 10,000 priced offerings do tend to lose out in comparison to phones priced higher. Based on the short time I have had with the phone, here’s what I feel about the Tecno Mobile Camon I.

The Camon I sports a design we have come to expect with similarly priced smartphones. The phone sports a polycarbonate chassis which is surprisingly light at just 134 grams and fits well in the hand. The front of the phone features the display on top of which we find the earpiece flanked by the front-facing camera on one side and the LED flash on the other. 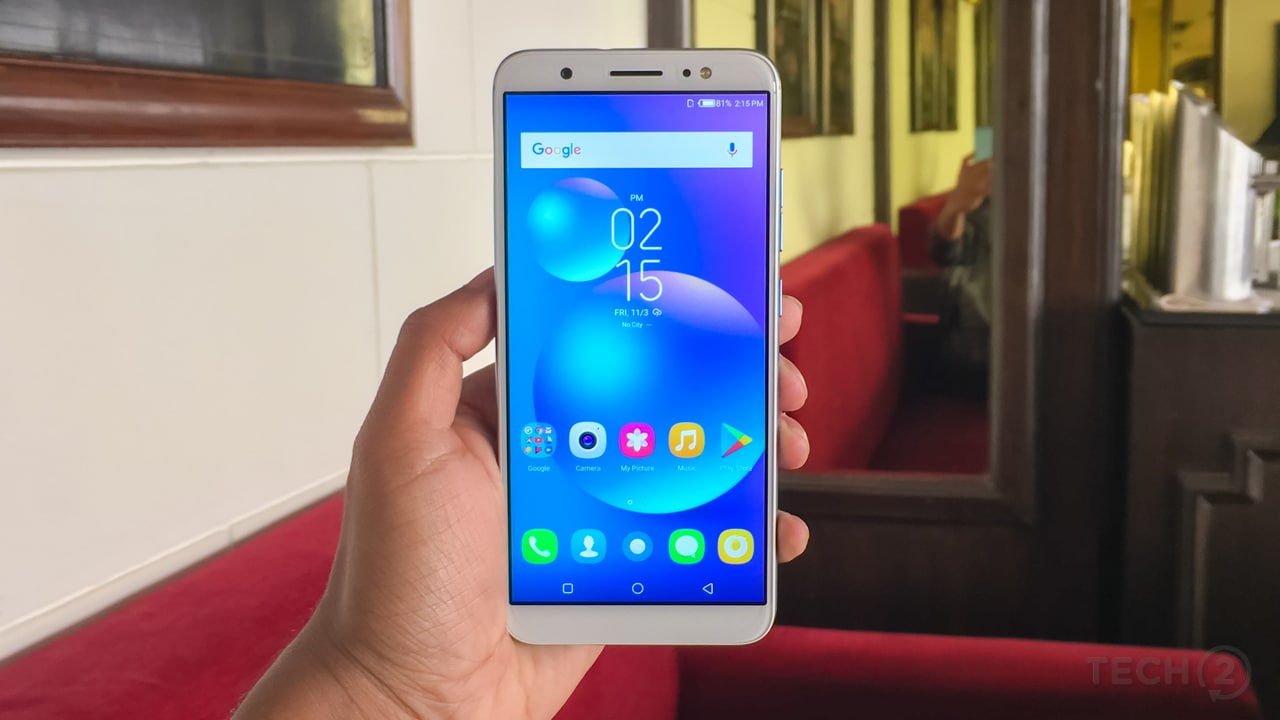 The Camon i has a polycarbonate body and weighs just 134 grams. Image: tech2/Shomik Sen Bhattacharjee

On the right we get both the volume rockers and the power button which do feel well built but a tad wobbly. On the left we have a rather bare look with only the dual SIM and microSD card tray tucked towards the top. The button positioning here is bound to cause a few accidental clicks here and there but should be fine once one gets used to it. The back is bear with only the camera module and the fingerprint scanner. Image: tech2/Shomik Sen Bhattacharjee

The back features the primary camera followed by the flash right below and the fingerprint sensor towards the middle. Tecno Mobile has played it simple in terms of design here but it does manage to feel sturdy without any creeks or odd cutout’s.

The Tecno Mobile smartphone comes with a large 5.65-inch Tecno Full View HD Plus display with curved edges and a 2.5D glass on top. The Camon I is powered by a quad-core Mediatek 6737H chipset and comes in a single variant with 3 GB RAM and 32 GB of onboard storage. The Tecno Mobile Camon i comes with a regular microUSB port and a single speaker grille. Image: tech2/Shomik Sen Bhattacharjee

The smartphone includes a rear-mounted fingerprint scanner and comes with support for two SIM cards and a dedicated microSD slot for storage expansion. It also has support for VoLTE, 3G, GPS, WiFi 802.11 a/b/g/n/ac and Bluetooth v4.0. The Camon I comes in three colour options, namely, midnight black, champagne gold and city blue.

The Camon I features a large 5.65-inch Full HD Plus IPS LCD display in an aspect ratio of 18:9, which is slowly beginning to become a norm rather than a feature. At first glance the display looks vibrant but does feel a tad bit on oversaturated side. Colours are punchy and the IPS display does ensure that there is little to no shift in colour when viewed at an angle. 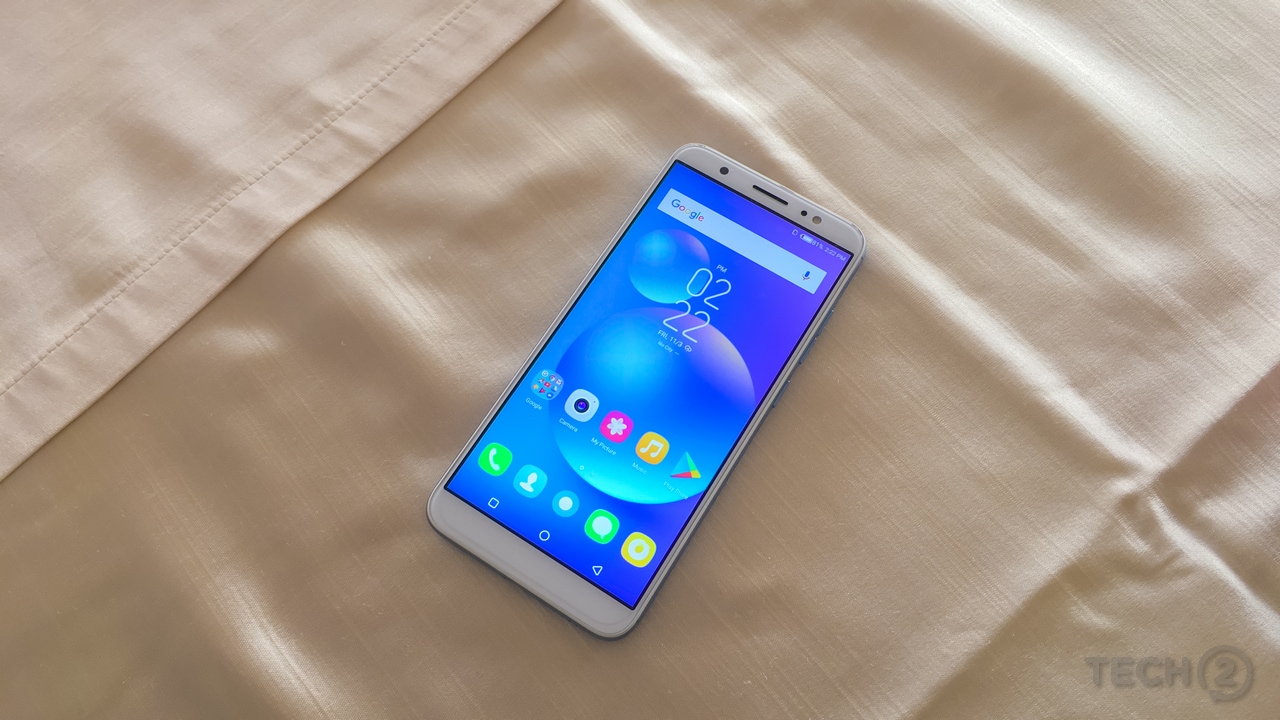 The phone comes with a tall 18:9 aspect ratio ensure a screen to body ratio of 82.1%. Image: tech2/Shomik Sen Bhattacharjee

The taller aspect ratio does make the display feel expansive and immersive with a claimed screen to body ratio of 82.1 percent. To top it off, it had a 2.5D curved glass which sits on top of the display.

The display is also bright enough to ensure that readability in sunlight in not affected. The panel was also adequately sharp though we don’t have any numbers on the actual resolution or the pixel density of the display.

Tecno Mobile has decided to power the Camon I with a quad-core MediaTek 6737H 64-bit SoC clocked at 1.4 GHz. This is a bit of a disappointment since most competitors in the segment do pack a more capable Qualcomm Snapdragon powered SoC. The performance of the chip however is yet to be tested. The Camon i is powered by the MediaTek MT6737H processor along with 3 GB of RAM. Image: tech2/Shomik Sen Bhattacharjee

The phone comes is available in a single variant with 3 GB of RAM and 32 GB of internal storage. While that might sound less, the company has thrown in a dedicated microSD card slot for storage expansion. That said, the phone comes with only 21.9 GB of usable storage from the available 32 GB of storage.

The Camon I features Tecno Mobile’s very own UI called HiOS. Similar to most Chinese OEMs, HiOS looks and feels a lot like Xiaomi’s MIUI. Based on Android Nougat 7.0, quick switching between apps was also possible. The only thing that did disappoint me a bit was the lack of an Android security patch update since November.

The apps icons were colourful and the system animations felt smooth even after I had opened multiple applications in the background. The phone does not feature any bloatware either and comes with only a bunch of regularly used apps and Google services. 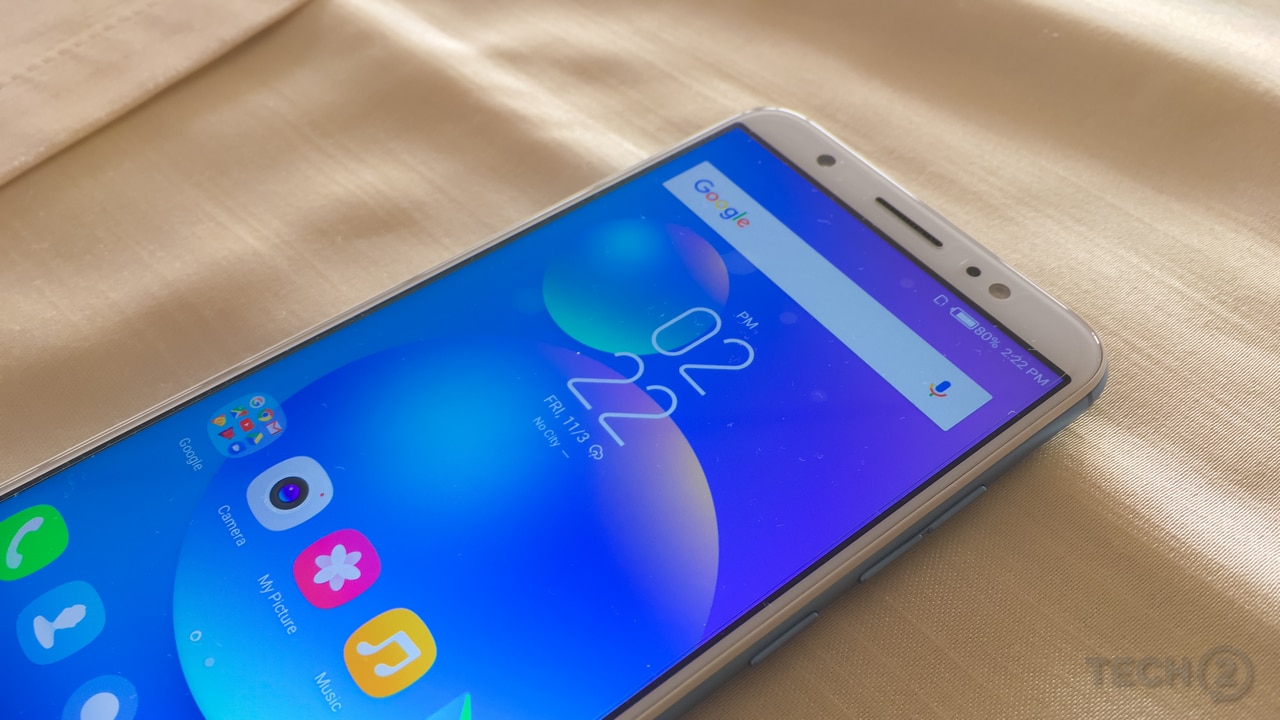 The phone runs on Tecno Mobile’s very own HiOS which is based on Android Nougat 7.0. Image: tech2/Shomik Sen Bhattacharjee

HiOS being a new user interface for users to get used to and we have to delve deeper into what it has to offer and how can it can possibly improve in the future, in our in-depth review. For those hoping for an update to Android Oreo, the company is yet to mention anything on that end.

The camera is undoubtedly the area where the company is putting all its money on. The company’s tag line for the Camon I is “Magic in any light” which is to emphasise on how good the camera is across lighting conditions. The phone is also the first in the company’s Camon lineup which focuses on being a ‘camera-centric’ series for Transsion Holdings. 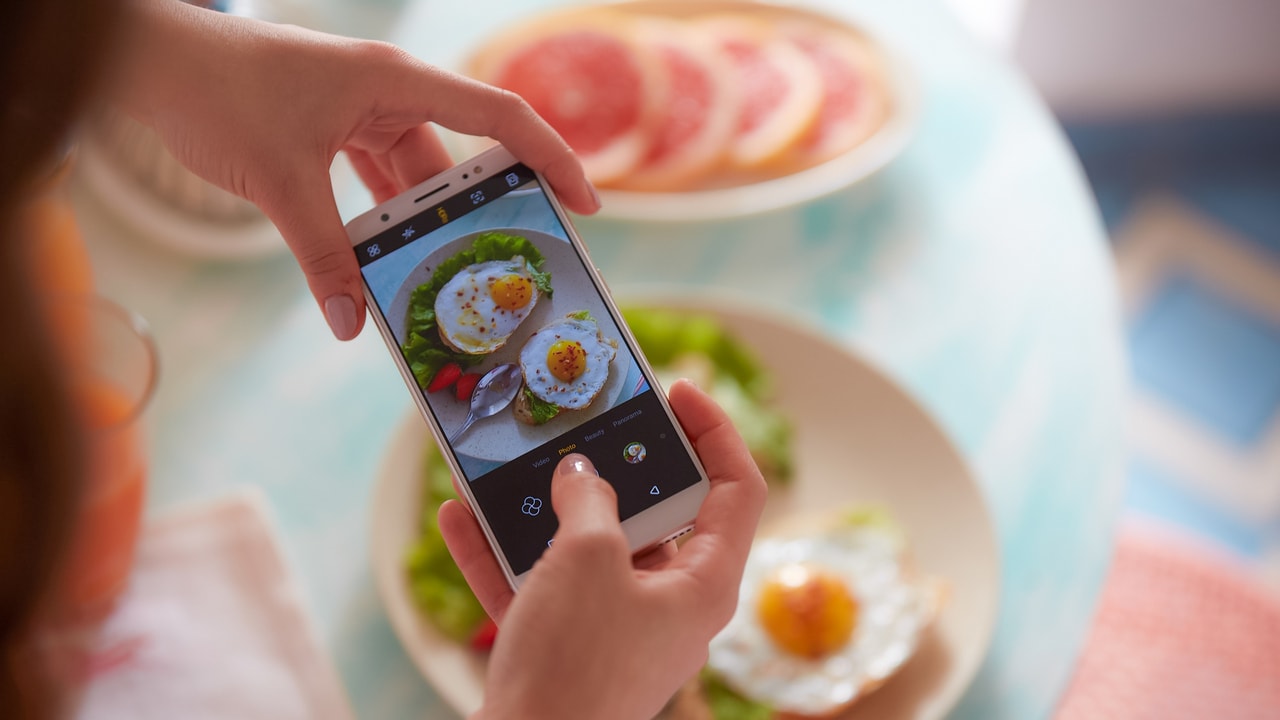 The Camon i get a 13 MP f/2.0 aperture camera on the back as well as on front. Image: Tecno Mobile

The phone features a single 13 MP primary rear-facing camera sensor along with an f/2.0 aperture and phase detection autofocus. It also comes with a quad-LED flash which is a first for the budget smartphone segment. The company during their product presentation stated that the phone uses a 5P lens instead of a 4P lens which makes a major difference in image quality.

The front camera on the Camon I is identical to the one on the back, a 13 MP sensor with an f/2.0 aperture coupled with a forward-facing flash for low-light selfies. This is an 80 degree wide-angle lens, meant for group selfies.

I did manage to get a few quick shots in good lighting condition and the resulting images were well detailed with pleasing colours. We will have to extensively test the camera out to find out how it fares against the competition.

While there are a number of smartphones trying to appeal to the masses, it is becoming increasingly difficult for new entrants to create a product which is unique and yet aggressive in terms of pricing. While Tecno here are not boasting about class leading processing prowess or a first in segment dual-camera setup, it is trying to focus its effort towards getting the basics right. 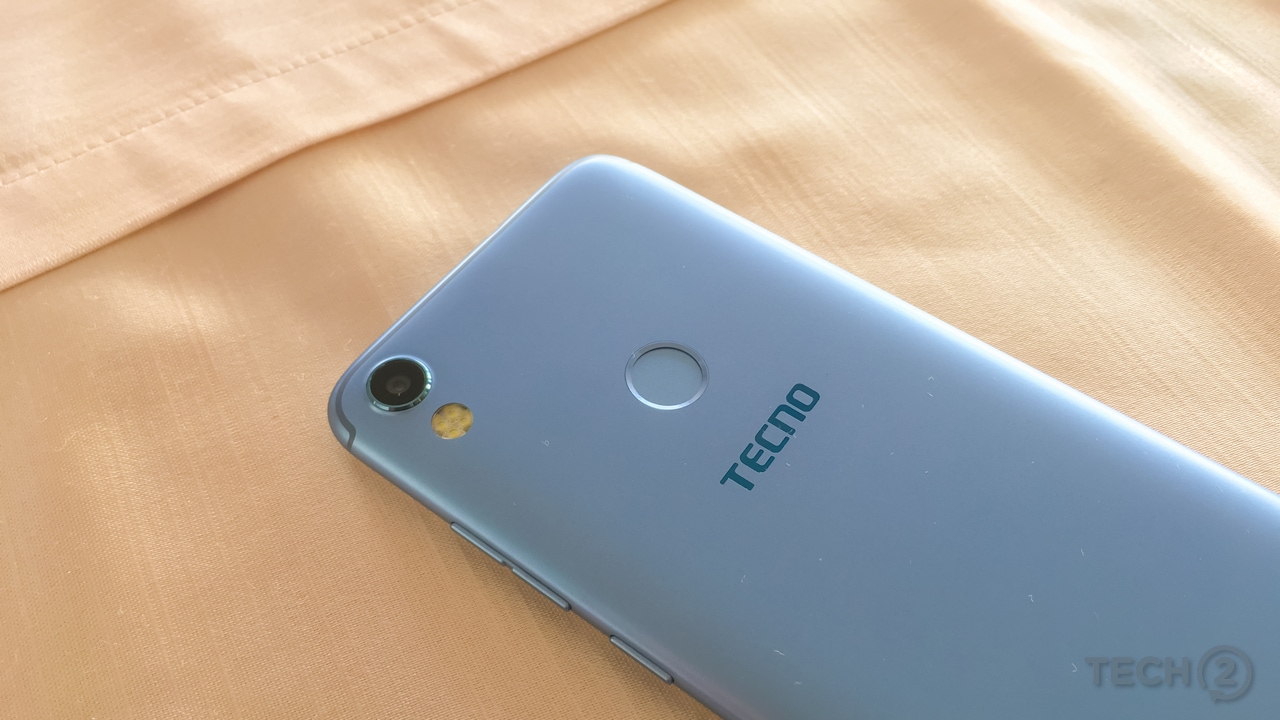 The Tecno Mobile Camon i goes up against the Redmi Y1 and the Honor 7X. Image: tech2/Shomik Sen Bhattacharjee

Gaurav Tikoo, the Senior Vice President of Marketing for Transsion Holdings, during the presentation said that the company had spent a year learning what their biggest focus for the Indian market should be before launching the Tecno Mobile brand in India. But only time would tell whether the company’s ‘back to basics’ approach will pay any dividend in a market which is saturated with neck-to neck competition.

Priced at Rs 8,990 the Camon I will be available across Tecno Mobile’s offline retail outlets only. It will be up against the likes of the Xiaomi Redmi Y1, the Honor 9 Lite, the InFocus Vision 3 and also the Honor 7X.

Honor announces discounts and cashback on the 9 Lite, 7X, accessories in its Blockbuster sale