Spider-Man may be spearheading PlayStation 5 charge, but Sony is banking on its female leads to carry next-gen console

It was on Thursday night that Sony finally gave the world a peek at what it's been working on all this time: The PlayStation 5 The Sony PlayStation 5 in all its glory. Twitter @PlayStation

That said, If I tilt my neck by 90°, it doesn't look too bad sitting on its side. Still, it's hard to shake off its resemblance to a reverse Oreo, Sauron's tower, some sort of concept vehicle, a waistcoat of sorts with a high collar, what EVE (of Wall-E fame) looks like after a ride through a trash compactor and so on. There aren't nearly as many comparisons as the iPhone's three-camera setup spawned back when it launched, but it's early days yet. After all it was only on Thursday night that Sony finally gave the world a peek at what it's been working on all this time: The PlayStation 5. The DualSense controller had been announced — along with a gallery of images — way back in April, so the colour scheme, if not the design, should have been expected.

While my first thoughts about the look and feel of the console were less about its aesthetics, and more along the lines of just how long it would take for that thing to be discoloured by an unsightly layer of dust, this piece will not delve too heavily into the 'console unveil' aspect of the Thursday night presentation. In fact, this is the last we'll speak of it.

After all, who cares what it looks like as long as it's got great games and plays them well, right?

The reveal showcase (or 'get your hopes up before they are dashed in time' parade, if you prefer) titled 'The Future of Gaming' of  kicked off with a brief word from Sony Interactive Entertainment CEO and president Jim Ryan, before leading into this:

Sure, the name is somewhat clunky and in time, people will probably refer to it as "Spider-Man 2" or "Miles wala (substitute for の if you're in Japan) Spider-Man". Regardless, Marvel's Spider-Man: Miles Morales (that's going to take some getting used to) is the basket into which Sony is putting most of its eggs when it comes to launch titles, considering it was one of the very few games listed for a "Holiday 2020" release.

Sony and launch day titles have had something of a chequered past with the Japanese company facing a fair bit of flak in 2013 for the relatively underwhelming Killzone Shadow Fall that was released on the same day as the PlayStation 4. Of course, history would judge the game kindly and it is considered a commercial success, but to say it had the masses salivating ahead of launch day would be quite the stretch. In comparison, Miles Morales' first full video game outing is far more likely to generate buzz and those all-important preorder sales.

Considering the polished gameplay, gorgeous graphics and engaging story — not to mention three substantial and equally engrossing DLC chapters — of Insomniac Games' 2018 offering, Marvel's Spider-Man, there's reason to believe we may have another 'Game of the Year' contender on our hands. More pertinently, this is the sort of launch title that compares very favourably with Halo: Combat Evolved on the Xbox almost two decades ago. The Master Chief's first appearance provided a sizeable chunk of the one million customers to pick up an Xbox in its first three weeks a reason to buy into Microsoft's vision for gaming in the 21st Century. Marvel's Spider-Man: Miles Morales (Promise I'm not going to type that out in full for the rest of this piece) has the potential to be just that.

But generally speaking, and more specifically in a coronavirus-ravaged world where disposable incomes are no longer so disposable, expecting to sell a console to millions on the back of one game is naive at best, foolish at worst. And this is before we even consider (which we won't, in this article anyway) the sort of astronomical price tag that is likely to accompany the PS5 at launch. So what else is going to convince people to buy this console?

We already knew that Assassin's Creed: Valhalla and Watch Dogs: Legion are supposed to be hitting the stands — digital and the regular sort — at the end of this year, but you could play those on a PS4 or an Xbox One for that matter. Sure, there are some remasters/remakes/retakes in the works. Take your pick from GTA V, Oddworld: Soulstorm and Demon's Souls. Each to their own, certainly, but if you ask me (and if you are reading these words, I'll assume you're doing just that), remakes and remasters aren't the best way to go about building hype for a next-generation console. Also, that GTA V is essentially a retooled, respecced and somewhat expanded version of the game that first released on the PlayStation 3 doesn't exactly have me clawing my way over people (presumably masked ones, some of whom might be wearing face shields) to get my precious preorder in.

Still, on with the show and after a few more encouraging teasers/trailers/advertisements (or bits of concept footage, if the developers are being honest), one thing starts to become clear: Sony is banking on female leads to carry the PS5.

These ones, to be precise: 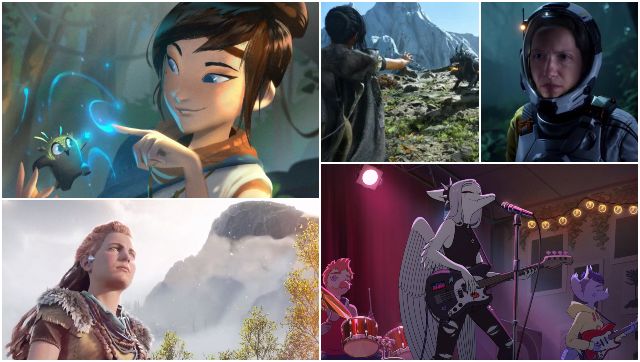 It's worth noting at this point that there has never before been a console reveal that showed off so many games featuring female leads. About bloody time, you say? Most definitely.

A majority of the games unveiled on Thursday night carry the extremely vague launch date of '2021' and so it's safe to assume that even if (and this is a big if) they release on time, it's possible the actual games will vary greatly from what was showcased. A launch date of 2021 is also broad enough to account for rushed games that hit the market early in the year, potentially littered with bugs and possibly, completely broken.

Nevertheless, it's the prospect of what these games could be that keeps anticipation levels high. So what if we've been burnt before (John Romero, Peter Molyneux, Casey Hudson et al, I'm looking at you)? Long after 'The Future of Gaming' had drawn to a close, it was only a handful of teasers that fit this bill and stayed with me, starting with Horizon Forbidden West. Obviously. It's Horizon, it's Aloy commandeering mechanical animals, it's lush scenery, it's fond memories of taking down that no-good Redmaw in the first game. What's not to like? That this announcement trailer is clearly still quite early into the development process be damned! I've yet to see developer Guerrilla Games put a step wrong.

From one of the longest trailers of the night to the shortest, the teaser for the tentatively-titled Project Athia was so threadbare that I still don't even know what the protagonist looks like. What we do know, however, at this point — that is unless the developers go on to do a BioWare (does my deep sense of bitterness show?) and blow everything to hell — is that the game prima facie packs supernatural enemies, quasi-platformer action and some seriously cool combat into what seems to have all the potential of becoming a neat little package.

The next stop was Kena: Bridge of Spirits, which again sports a female protagonist uniquely connected to her environment, which includes a bunch of cuddly critters that seem to follow her where she goes. Said critters appear to follow a similar dynamic to the tail rocked by your nameless and faceless humanoid of a protagonist in Journey, that gets longer as you accumulate more symbols on it. Unlike the Project Athia trailer, this one actually shows some gameplay with young Kena (I imagine that's the protagonist's name and will continue to think so until I'm shown otherwise) doing some forward rolls, indulging in a bit of archery and light combat, and suddenly turning a barren wasteland nice and green. Sure, some of those moves look conspicuously like Aloy's and it's tempting to call Kena: Bridge of Spirits a Project Athia Lite, it's far too early to typecast what seems like a fascinating adventure.

From the largely bright and cheerful world inhabited by Kena to something much darker: The sci-fi (it's hard to tell at this point if it's action-adventure, action RPG, survival or horror) game Returnal. I'd be remiss not to mention that the announcement trailer confused me as much as it piqued my curiosity. At first sight, it appears to be based on the premise that you too can be Ripley (Alien trilogy) or Elizabeth Shaw (Prometheus) or Beth Halperin (Sphere) in an intergalactic adventure. Then comes the allusion to some sort of Groundhog Day-style looping timeline mashed up with Death Stranding sensibilities. And then comes some weird 'pew-pew-pew' laser gun battle. Even if what the actual game is going to be like is still very uncertain, one thing is totally certain: Reports, leaks and rumours of Returnal until its launch will make for fascinating reading.

And the fifth of these female-fronted games that stayed with me hours after the final flourish of branding rolled at the end of PlayStation's online event was Goodbye Volcano High, where you ostensibly play the role of Fang, a student at the school. This one took a bit of time to get through my firewall of suspicion. First off, there was that name. In my experience, nothing that started with the word 'goodbye' has lived up to expectation — whether it's the films Goodbye World or Goodbye Christopher Robin, the Less than Jake album Goodbye Blue and White or the 1982 novel Goodbye, Mickey Mouse. Second, there's the fact that this appeared to be a playable narrative adventure, rather than an out-and-out game. Third, there was a sneaking suspicion that this trailer had somehow slipped through the ESRB net and was actually some sort of 'furries' fantasy. At this point, it's impossible to tell what the game will be like, but as a fan of Telltale Games and the Life is Strange series, this end-of-an-era, coming of age adventure seems most intriguing.

Elsewhere, there was Bethesda's Deathloop, an innovative first-person shooter that (in what seems to be a trend) also features a woman as one of the two protagonists, Little Devil Inside — that seems to answer that immortal question: What if Tim Burton made The Legend of Zelda: Breath of the Wild? — and one of the games I'm most curious about: Stray. You'll just have to watch the announcement trailer for yourself, because to attempt to interpret it for you would be to do its makers a grave injustice.

Then there were some forgettable ones that I've already forgotten. I think there was an NBA game teased there somewhere. But that's not important. What is, however, is that after that new Spider-Man game (told you I wasn't going to spell it out in full again) lays the foundation, it'll be up to Sony's female leads to take the PS5 to the same first-year success enjoyed by its predecessors... or beyond. But it's worth reiterating that we've only seen the tiniest of teasers so far. Only time will tell if this group of protagonists is up to the task.