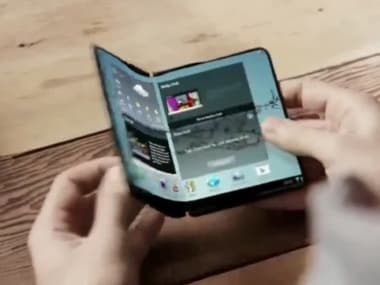 A report by The Korea Times cites an analyst who suggests that Samsung's 'Foldable' device is expected be released under the 'Galaxy' brand next year. The report mentions that the parts of the foldable smartphone will be supplied by its subcontractors in November and the company will then start assembling the device aiming to be launched next year. The expected price 2 million South Korean won (around $1,900) was also mentioned in the report, which excludes subsidies from carriers.

Park Hyung-woo, an analyst is quoted saying "This new device is an interesting thing as it will have two inside panels and one outside panel with the two inside panels forming the 7.3-inch screen when the phone is unfolded". According to the analyst the prototype of the foldable device will be showcased to various US and European mobile carriers during the technology fair (expected to be the CES 2019) at Las Vegas in 2019.

According to the report company's spokesperson Kim Choon-gon said that the firm was on the track to develop a "true foldable display". He declined to comment on details about the specification and features of the smartphone. The reports mentions about the the latest patent filed by the company called as "artificial muscle" which allows the movement of the components in sync of the devices screen to protect them for getting damaged.

Samsung doesn't wants to let its Chinese competitors (Huawei and ZTE) get the title of "world's first" as both the companies are developing devices with foldable screens.

A Samsung engineer is quoted saying that "the reason top-tier smartphone firms are jumping into the market is because foldable designs are different and allow customers to use them one-handed, while also providing a larger high-resolution display when multitasking is desired" in the report.

Foldable smartphone might become the next trend like full-screen display and notched displays as there is no other way to increase the size of the display of a smartphone. But apart from offering a bigger display other benefits of a foldable device is not clear to us yet.

Earlier reports suggest that the device will come with 21:9 aspect ratio, 4K display and expected to be called as Galaxy X. Other brands including Microsoft, Apple, Huawei and Nokia are also in a process to showcase their foldable devices as patents for the same have already been spotted online. Here's a video and a look at how the Samsung next foldable device could look like.