The Galaxy S10+ has now made a second appearance on the popular benchmarking website within a month.

Samsung Galaxy S10+ will make its public appearance on 20 February, a few days before MWC (Mobile World Congress) 2019 gets underway. The upcoming flagship from Samsung to be launched at the company’s major Unpacked event has been leaked on several occasions over the past few months.

After recently showing up on Geekbench, the premium Galaxy S10+ has now made a second appearance on the popular benchmarking website. But this time, its the Exynos 9820 version of the Galaxy S10+ which is expected to arrive in India and a few other Asian markets. 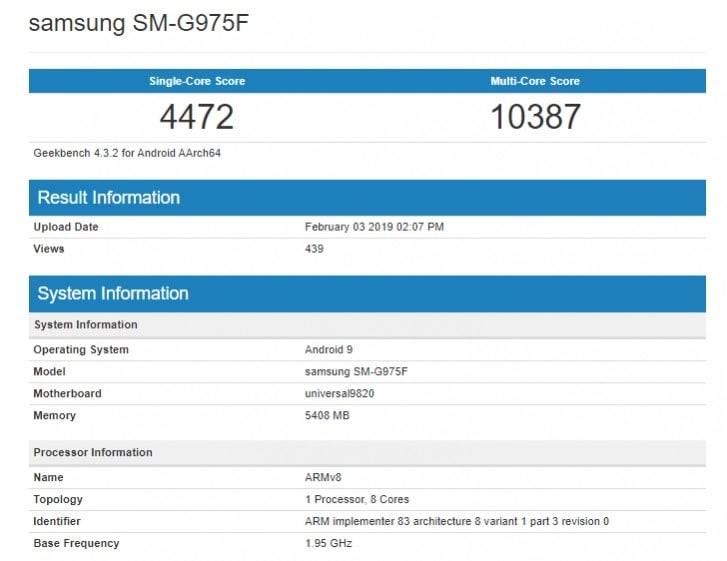 As per the scores on Geekbench, the Exynos version of the phone does marginally better than the Snapdragon 855-powered version. The Galaxy S10+ with the Exynos chip scores 4472 when it comes to single-core score and 10387 in the multi-core score. This is marginally better than the 3413 and 10256 scores achieved by the Snapdragon 855 version of the phone.

However, these scores are still not enough to catch up with those achieved by Apple's A12 Bionic chip found on the iPhone XR, iPhone XS and XS Max. Previous reports have also suggested that the Galaxy S10 might support reverse wireless charging technology and support 8K videos at 30 fps courtesy of the proprietary Exynos 9820.

Apart from an updated chipset, Samsung is expected to pack this year's Galaxy S10 lineup with a punch-hole display, as well as an under-display fingerprint scanner.