Samsung Galaxy Note 8 to start selling from 15 September in the US, from $930 onwards

Samsung Electronics Co Ltd set out to wipe the slate clean in New York on Wednesday with its new Galaxy Note 8 “phablet,” hoping features like dual rear cameras and its biggest-ever screen will extinguish memories of the device’s fire-prone predecessor.

Samsung Electronics Co Ltd set out to wipe the slate clean in New York on Wednesday with its new Galaxy Note 8 “phablet,” hoping features like dual rear cameras and its biggest-ever screen will extinguish memories of the device’s fire-prone predecessor. The world’s largest smartphone maker by market share debuted the phone-cum-tablet as it gears up to compete for pre-holiday season sales with a widely expected 10th anniversary iPhone from US rival Apple Inc, set to be unveiled next month. Priced at $930 to $960 from network carriers, including a dialling and data plan, the Note 8 kicks off a new era of premium-priced handsets, which analysts expect to be joined by $1,000-plus iPhones next month. The unveiling came five months after the release of the Galaxy S8 smartphone. Analysts said brisk sales of that device indicate recovery in Samsung’s standing after battery fires prompted the October withdrawal of the Galaxy Note 7 just two months into sales, which cost the company billions of dollars.

The recall and related safety concerns briefly cost Samsung its number one spot in the global smartphone rankings, according to researcher Counterpoint. It has since regained ground, with Strategy Analytics putting its second-quarter market share at 22 percent, more than Apple and China’s Huawei Technologies Co Ltd combined.

“Of course no one will forget what happened last year, but we also won’t forget the millions that stuck with us,” DJ Koh, the company’s mobile chief, said at the launch event. 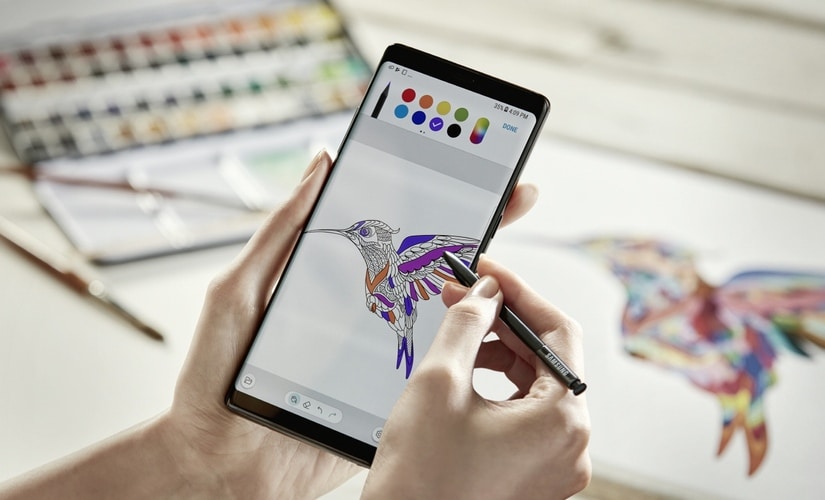 The Note 8 will be sold from 15 Sept, Samsung said, without elaborating on place or price. Verizon Communications , the largest US wireless carrier, said it will begin taking pre-orders on Thursday for the phone at a price of $960. Rival T-Mobile will offer it for $930.

“I hate to say it, but $1,000 is becoming the new mark” for premium devices, said Bob O’Donnell of Technalysis Research. Samsung’s Note models usually sport bigger screens than the S series and come with a removable stylus. The trademark curved screen of the latest incarnation measures 6.3-inches corner to corner, just 0.1 inch bigger than the S8+.

All of Samsung’s Galaxy line phones now have edge-to-edge displays. Apple’s new premium phone is expected to feature a similar display, but its update to the iPhone 7 might not, which could be a disadvantage for Apple, O’Donnell said. “The bar gets raised in terms of what people view as standard, and if you’re not meeting the bar, it’s going to have an impact,” he said.

The South Korean company has been the main driver of growth in handsets with 6 inch-plus screens, a category Strategy Analytics expects to grow 10 times faster than the overall market next year. Samsung has also installed dual rear cameras on a handset for the first time, which promises improved photographic control and picture quality. But Samsung made no mention of so-called augmented reality features, in which digital images float over real-life objects on screen. Apple in June made that technology a major focal point of its next operating system.

Other features include security technology, such as facial recognition and fingerprint and iris scanning, and artificial intelligence in the form of Samsung’s Bixby voice-command assistant.

Samsung also took a jab at Apple at the launch event, mentioning its new phone will have a standard headphone jack, unlike the iPhone 7 with a single jack, a feature that has been criticised by some users.

Samsung Galaxy Note 8 launched with 6.3-inch AMOLED display; to be available from 15 September

Samsung Galaxy Note 8 pre-registrations have begun in India; no word yet on price and availability