There's still some confusion if the Samsung Galaxy A80 is the same phone as the Galaxy A90.

Samsung is expected to host as many as three separate launch events to unveil the company's latest wave of Galaxy A series of smartphones later today. One of the phones expected to launch is the Galaxy A80.

Referred to as the Galaxy A90 over the past few months, the Galaxy A80 has now been spotted on GeekBench, revealing some of the phone's key hardware specifications. 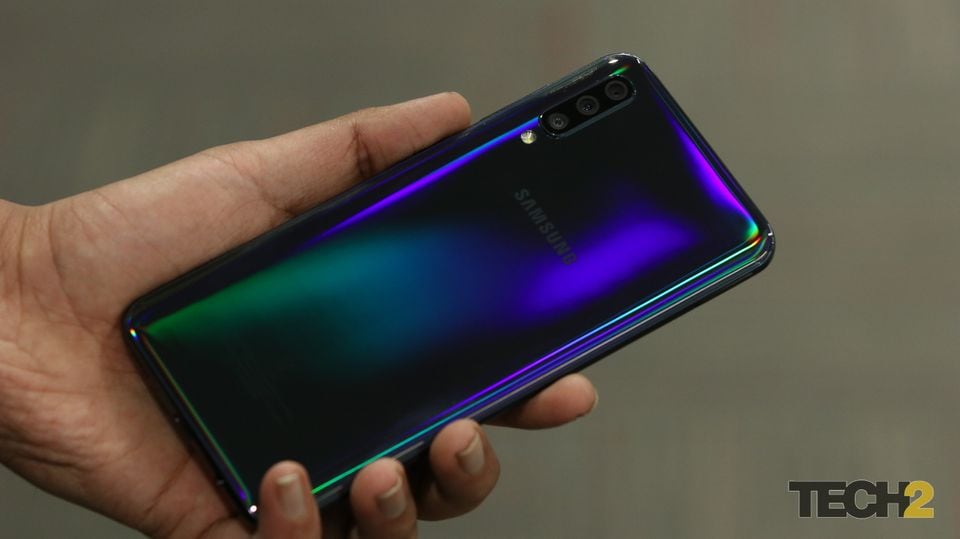 The refracting back on the Samsung Galaxy A50. Image: tech2

As per a report by GizmoChina, the phone stopped by the Geekbench database bearing the 'Galaxy SM-A805F' moniker. Going by Samsung's usual naming order, this is our first confirmation of the fact that the phone will indeed be called Galaxy A80 and not A90.

The phone was spotted running on Qualcomm's SM6150 platform which is believed to be a successor to the Snapdragon 675 chipset. This does contradict previous leaks which suggested that the Galaxy A90 will sport an SM7150 chipset. The chipset is coupled with 8 GB of RAM and the smartphone achieved a score of 2,488 and 6,732 points in Geekbench's single and multi-core tests, respectively.

From what we know so far, the Samsung Galaxy A90 is expected to feature a 6.7-inch FHD+ OLED display with a resolution of 1,080 x 2,400 pixel, without a notch. The phone is said to arrive with a slider, which houses a set of three cameras (48 MP primary + 8 MP + ToF camera) and can be rotated for selfies and video calls. The battery capacity of the device has been revealed to be 3,700 mAh with 25W fast charging support.

We're hopeful that the confusion around the Galaxy A90 and the Galaxy A80 is over once Samsung gets underway with its launch events.