Even though the Redmi Smart Band is priced 100 bucks over the Realme Band, it manages to outclass it in many departments, leaving the competitor grasping at straws.

Realme launched its first fitness band some time ago in India, and now its arch-rival Redmi has also dipped its toes into fitness waters for the first time. Although Realme did a good job with its fitness band and is cheaper than the Redmi Smart Band, the latter outdoes it in a lot of departments. I got to use the Redmi Smart Band for almost two weeks, and I think it perfectly fits the profile of the “best first fitness band” for anyone. At Rs 1,599, it is not the cheapest band available in the market but it provides great value for money. Why do I say this? Well, let's break it down for you:

Looks smart but has a few design flaws

Redmi Smart Band comes with a 1.08-inch TFT LCD colour touch screen which is larger than its competitors including the Mi Band 4, Honor Band 5 and Realme Band. This earns some brownie points for the band, since there are many who hate tapping on tiny screens.

The band comes with basic detachable straps that have sharp edges. In my opinion it certainly adds to the "cool" factor here. It isn’t “wow!”, but it is comfortable, goes with almost any outfit that I wear and I think that is what one’s first fitness band is expected to look like - inconspicuos. The band is comfortable and good to look at, but it took me an eternity to put the band on! Image: Tech2/Priya Singh

The straps are available in green, black, orange and blue colour options. One thing that I really want Redmi to work on here is the design of the straps. I mean, they are comfortable and good to look at, but it took me an eternity to put the band on! The strap pin doesn't really pop in easily, which frustrated me. Once it's done, it sits pretty comfortably, but it would be better if the wearer wasn’t pre-annoyed before they actually start using the band. The design and build of the Redmi Smart Band makes it pretty decent to wear for extended periods of time. Image: Tech2/Priya Singh

The Redmi band weighs just 13 grams. which gives it an edge over its competitors. It is lighter than the Realme Band (20 gm ), the Mi Band 4 (22.1 gm) and even the Honor Band 5 ( 22.7 gm). The design and build of the Redmi Smart Band makes it pretty decent to wear for extended periods of time. No skin irritation or rash was noticed even with perspiration. It comes with a 5ATM water resistance rating and can survive in up to 50 metres of water. I had it on while washing hands, taking showers and in my experience, it lived up to my expectations. The button-less aesthetic of the band gives it a clean and appealing look.

The fitness band comes with a TFT LCD display that has a resolution of 120 x 220 and goes up to 200 nits brightness. It is not the brightest device around; the Mi Band 4 offers 400 nits, but it was good enough for me. You also have the option to set the desired level of brightness via the band. The bezels surrounding the screen are not very thick, hence making it easy to tap on the screen. On the homescreen, you will see time, date, day, number of steps and battery status. You can simply swipe up and down to see features like heart rate monitor, weather, status (distance covers, calories burned, steps), workout, notifications and more. The fitness band comes with a TFT LCD display that has a resolution of 120 x 220 and goes up to 200 nits brightness. Image: Tech2/Priya Singh

When it comes to watchfaces, the band comes with just three options, but with the Xiaomi Wear app, you can always download more. You also get a "raise to wake screen" feature and I found it to be responsive most of the time. Although this definitely consumes a fair share of the battery.

User-friendly UI with all the basic features

The band can be paired through the Xiaomi Wear app that is available for both Android and iOS devices. The app UI is easy to navigate as well. Data from the heart rate monitor, sleep monitor, and calories burned and all are presented in a graphical manner, which makes it easy to interpret. One of the headlining features of the band is its continuous heart rate monitor, which can also be turned it off, since it drains a lot of the battery. It was surprisingly quick and pretty accurate when I compared it with another piece of medical equipment that I have. The Sleep tracker, step count, calories burnt, weather update, are the other basic features that almost all fitness bands are expected to come with. I wasn’t impressed by the step counter, as it was not always very accurate, but I think this issue can be fixed with a software update. One of the headlining features of the band is its continuous heart rate monitor, which can also be turned it off, since it drains a lot of the battery. Image: Tech2/Priya Singh

Notably, the sleep tracker not only tells you for how long you slept, but it also breaks it down into light sleep, deep sleep and awake time. This data can be seen in a color-coded chart in the app. Pretty impressive and reliable! You will also get an "idle alert" that will remind you to stand and stretch if the band notices less than 20 steps in an hour. This is a good feature, since work from home has led to us sitting for long hours, and it helped me move around a little.

You can also control music on your phone via the band with play, pause controls and the ability to increase/decrease the volume. But to my disappointment, this functionality is not available if you are already using the workout mode. It’s a time when I interact with music the most. Redmi, please take note. 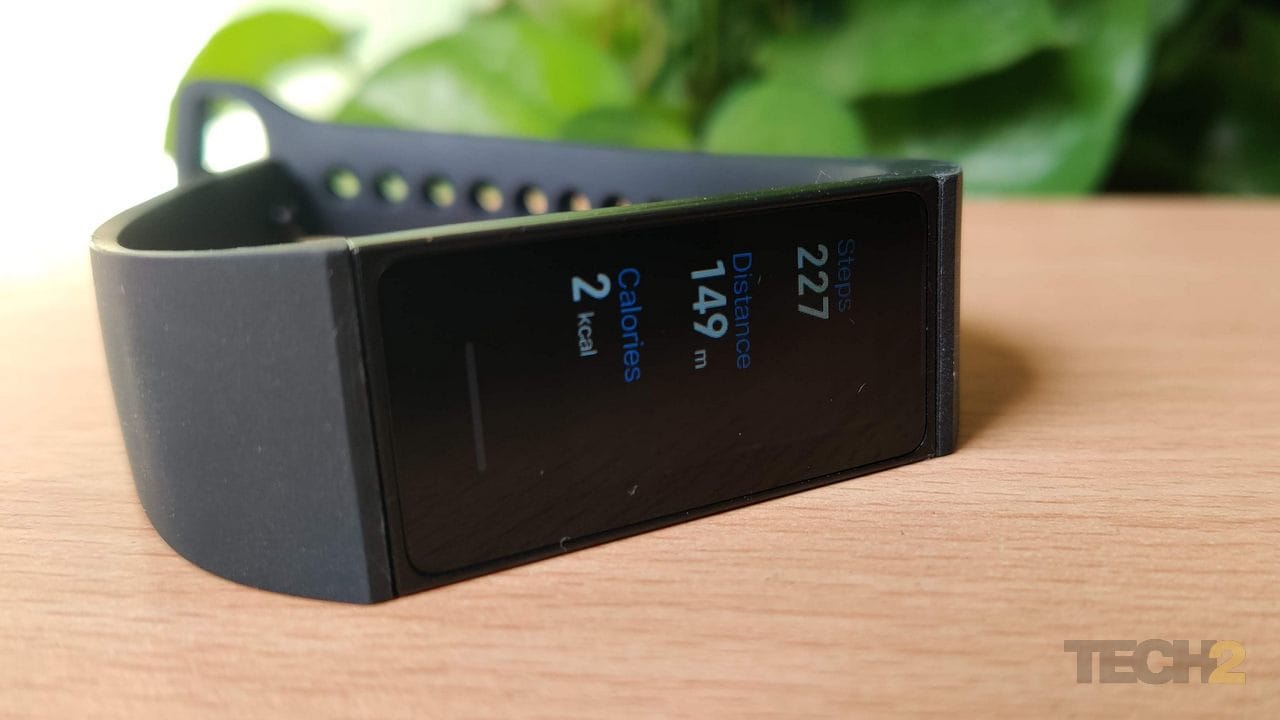 I tested it with my regular evening walk and I must say it was pretty good at detecting heartbeats, steps and the distance covered. Image: Tech2/Priya Singh

As for workouts, it offers five modes: outdoor running, treadmill, cycling, walking and freestyle. I tested it with my regular evening walk and I must say it was pretty good at detecting heartbeats, steps and the distance covered. The only thing I wished for was an option to control music, which wasnt possible without actually exiting the workout mode. 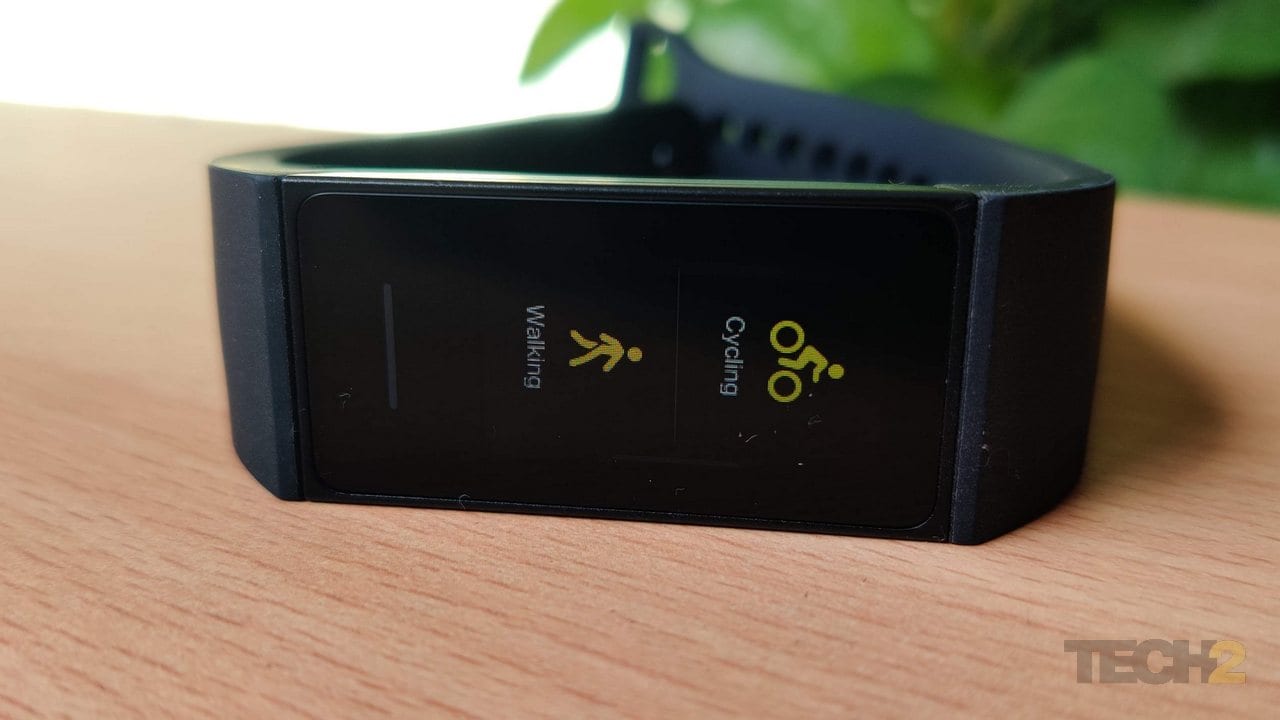 The Redmi Band data doesn't sync with Google’s Fit app, but given the price point, it isn’t really surprising.

Battery is its strong suit

The band offers remarkable battery backup. With battery-draining features like wake to raise, continuous heart rate monitoring, the band was down to 18 percent in a week. This includes frequent one-hour walks, all-day use and a few nights as well. A dead battery will go to 100 percent in less than two hours. It offers USB charging, which is pretty simple to plug-in. 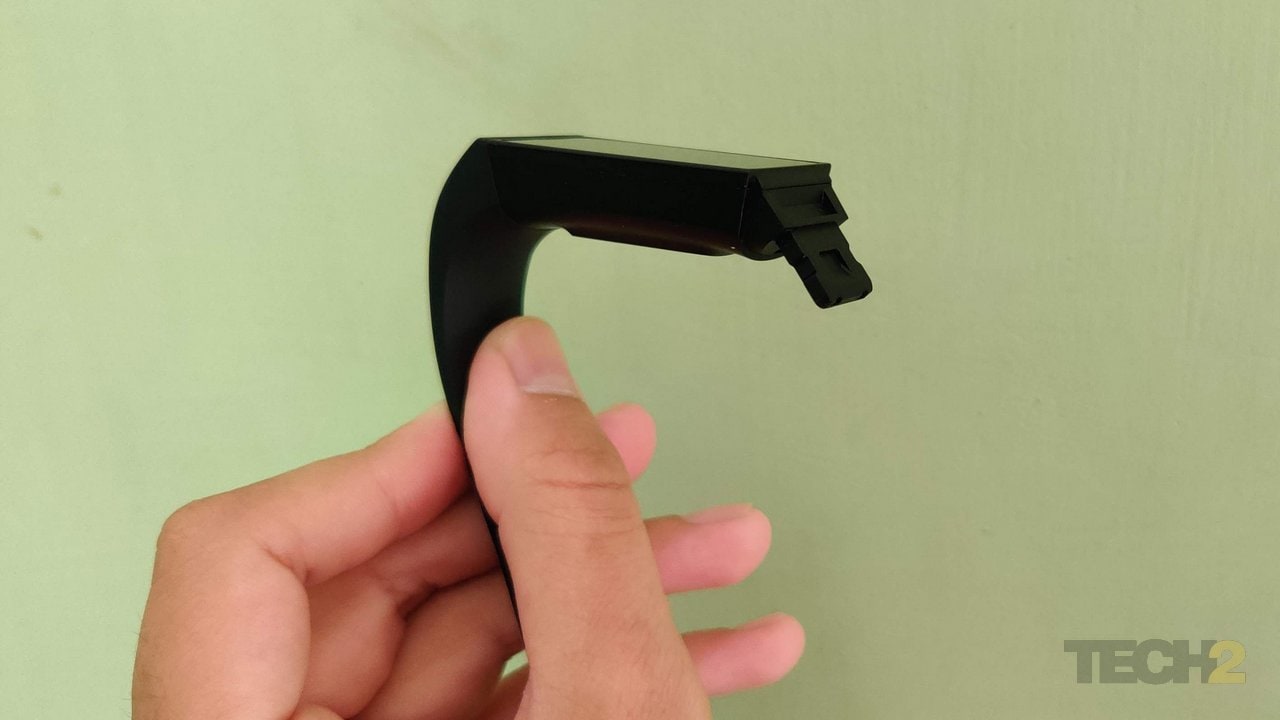 A dead battery will go to 100 percent in less than two hours. Image: Tech2/Priya Singh

The first rival in this price segment is the Realme Band, but the Redmi Band has a larger display, is lighter in weight, has a bigger battery (130 mAh) and the latest Bluetooth 5.0 BLE. The Redmi Smart Band clearly has an upper hand when compared to the Realme Band. The 100 bucks extra you pay is, in my opinion, well-compensated. 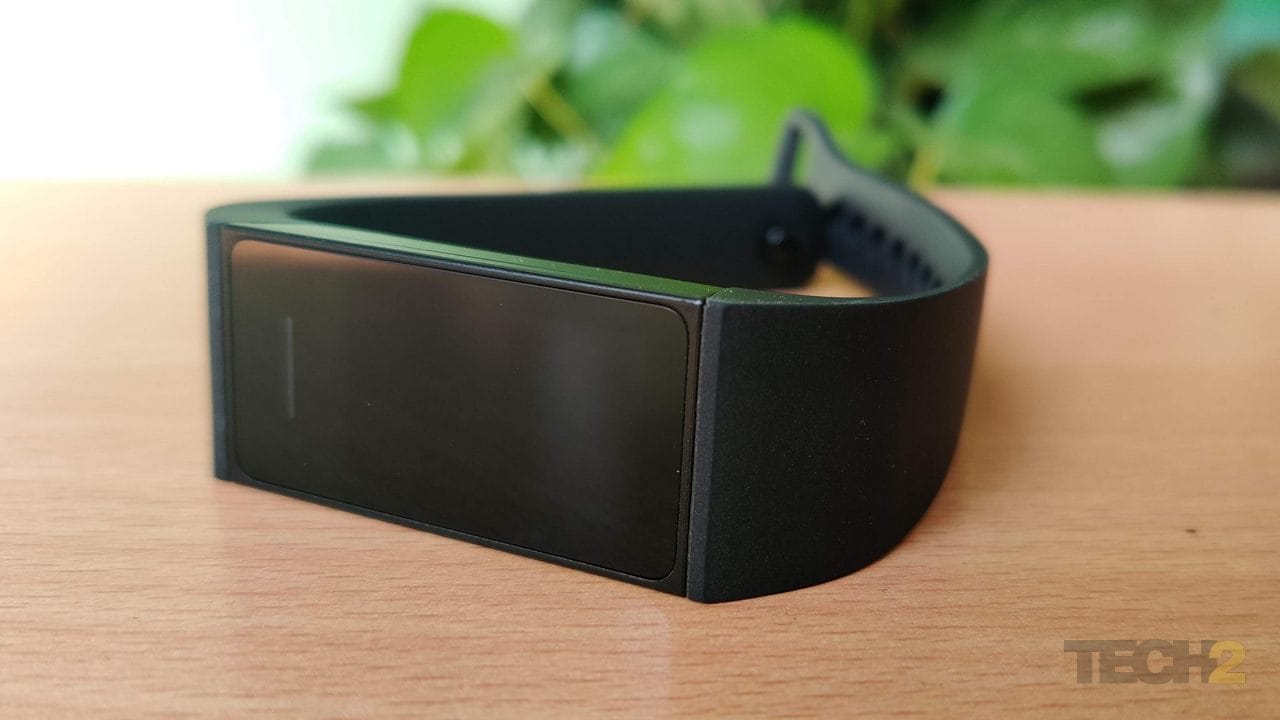 The Redmi Smart Band clearly has an upper hand when compared to the Realme Band. Image: Tech2/Priya Singh

If you can bump up the budget, the Honor Band 5 is a good option at Rs 2,199. It not only offers all the features in Redmi Band, but also comes with a blood oxygen monitor. Xiaomi’s Mi Band 4 is also a potential competitor here. It offers a 0.96-inch AMOLED display, 6 workout modes and houses a slightly bigger 135mAh battery. But it is priced at Rs 2,299, and that makes it a mmore considered buy when compared to the impulsive-purchase priced Redmi Band, unless you are hell-bent on using an AMOLED display.

Should you buy it?

At Rs 1,599, Redmi offers capable and reliable features, with a good sleep tracker, heart rate monitor, idle alert and daily steps goal. It did make a lazy person like me to get on my feet more.

The Redmi band still lacks a blood oxygen monitor, AMOLED display and has only five workout modes, but on this budget, these are acceptable omissions. The choice is simple and easy: if this is your first time buying a fitness tracker, go ahead and buy the Redmi Smart Band.