There's an incremental upgrade in performance as compared to the SD 845 chipset in terms of multicore scores.

Qualcomm's upcoming chipset Snapdragon 855 or Snapdragon 8150 will be the chipset that most of the Android flagships are going to implement in their devices. While the official unveiling of the chipset is still a month away, Royon's FlexiPai bendable smartphone/tablet has already debuted the chipset on 1 November. Now we have an early look at the benchmarking results from this chipset.

The size of the Snapdragon 845 ship belies its potential. Image: tech2/Anirudh Regidi

As per the report by GSMArena, the device used for getting these benchmarks is not the FlexiPai but some other prototype device. The chipset is said to be based on the new generation Kryo cores, though we do not know what kind of setup these Kryo cores will have.

Reportedly, the rumor has it that the configuration will not be of the 4 high powered, and 4 low power setup. Instead, we might see two cores for burst performance, two for sustained speed and four little cores to handle the lighter tasks. We are already aware that this chipset is going to be based on a 7 nm manufacturing process, and will be competing with other similar chipsets such as the A12 Bionic and Kirin 980. 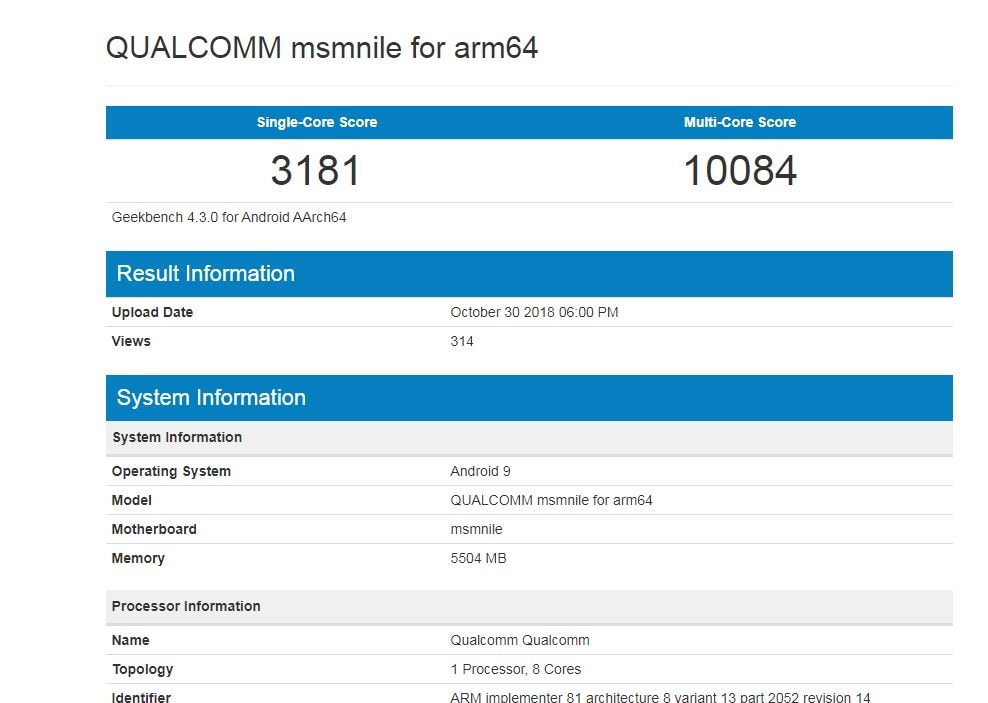 Coming back to the benchmarks, we see quite an incremental upgrade in performance as compared to the Snapdragon 845 chipset in terms of multicore performance, which was at 10084. In comparison, the multicore scores for the Mate 20 and Note 9 were 9026 and 9712. The single core scores, on the other hand, showed a decline as compared to Note 9's Exynos 9810. The latter showed a score of 3642 while the SD 8510 showed scores of 3181.  The Apple A12 Bionic chipset still seems way ahead.

However, here we must remind ourselves that this not the final product and we are not even sure whether the chipset is running at its maximum clock-speed or not. More information will be revealed once Qualcomm officially unveils the chipset, stay tuned.