Though Tiangong-1 is larger than several other manmade objects in the Earth's orbit, most of it is expected to burn out in the atmosphere during re-entry.

The Chinese Tiangong-1 space station has been out of control for than two years now as it slowly plunged towards Earth. Now the time has come for its long impending crash into the Earth's surface. Even at this close of a juncture, scientists are not quite sure where the 8-tonne hunk of metal will fall and at what time exactly. 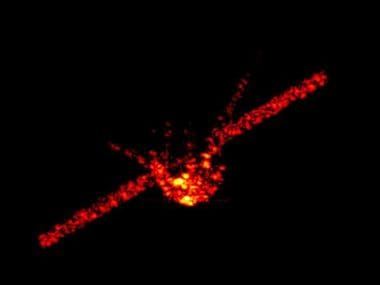 A radar image of the Tiangong-1 space staion. Fraunhofer Institute

BBC has reported that the exact location where the Space Station will hit is expected to come in around 1 hour before the crash. "Given Tiangong-1 has a larger mass and is more robust, as it is pressurized than many other space objects that return uncontrolled to Earth from space, it is the subject of a number of radar tracking campaigns," said Richard Crowther, the UK Space Agency's chief engineer in an interview with BBC. Though Tiangong-1 is larger than several other manmade objects in the Earth's orbit, most of it is expected to burn out in the atmosphere during re-entry. The report states that up to 20-40 percent of the satellite, which is nearly 1.5 tonnes-3.5 tonnes is expected to survive and there is a very high probability that the debris will hit only the sea.

The possible area of impact will not be outside 43 degrees North or South of the Equator, and although the report states that nearly 5.2 billion people live inside the impact area, most of it is the only ocean. For perspective, there has only been one instance of a person ever being hit by space junk back in 1997. So chances of the Tiangong-1 space debris causing loss of human life are slim.

Launched back in September 2011, Tiangong-1, an experimental space station had a design life of two years. During its extended flight, Tiangong-1 conducted experiments in space technology, space-earth remote sensing, and space environment exploration.