Tiangong-1 is a 19,000 pound Chinese space station that's going to crash into Earth soon; but there's nothing to worry

Tiangong-1, is reportedly giving scientists a hard time due to its out-of-control route making it difficult to predict where the satellite will land.

Although there are a lot of man-made space debris orbiting around the Earth's atmosphere, one particular object has caught the attention of scientists. The 19,000-pound Chinese space station, Tiangong-1, is reportedly giving scientists a hard time due to its out-of-control route around the Earth, making it difficult to predict where the satellite will land. 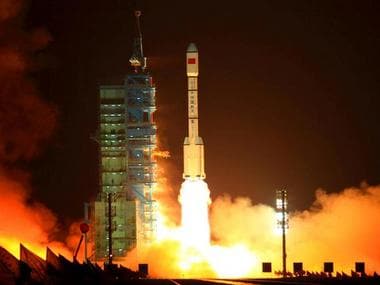 The Verge reports that the satellite will crash to the surface with around 10-40 percent of its weight. Doing some quick maths that turns to be 1,900 pounds (860 kg) to 7,600  pounds (3,440 kg). That is a large amount of debris that'll come crashing down on the Earth's surface. However, reports claim that there is about a 1-in-10,000 chance that the crash will happen in any populated area. Also, this considerable amount of mass will not fall as a single block of metal but will break into hundreds of smaller parts as it enters the Earth's atmosphere and scatters around a bigger area.

CBS has reported that China had lost control of the unmanned vehicle around two years back, and vaguely predicted that the space station would crash somewhere around late 2017.

According to the report, ESA (European Space Agency) has claimed that Space Station would crash sometime early this year saying its orbit "will inevitably decay sometime between January and March 2018, when it will make an uncontrolled reentry."

“Owing to the geometry of the station’s orbit, we can already exclude the possibility that any fragments will fall over any spot further north than 43 degrees North or further south than 43 degrees South,” said the head of the European Space Agency’s Space Debris Office, Holger Krag. This also means that the re-entry may take place over any spot on Earth between these latitudes.

Experts will reportedly only be able to pinpoint the time of re-entry by about 3 hours give or take, which does not give enough time for a warning.

A similar incident, according to The Verge, happened back in 2011 where a Russian spacecraft heading towards Mars and weighing 30,000 pounds was left stranded in the lower-Earth Orbit. It fell back to the surface in 2012 and crashed into the Pacific ocean. In fact, there has only been one instance of a person being hit by space junk, and that was in 1997. So chances of the Tiangong-1 space debris causing considerable human damage are slim.

NASA to launch new space toilet, that cost $23 million, to the Space Station