Oppo F15 is good, but for better overall performance, Redmi Note 8 Pro is a superior option.

Oppo F15 is the Chinese company’s latest offering and its first launch of 2020. The device is placed in the perilous sub-20k price segment, where competition is with some of the very successful smartphones such as the Redmi Note 8 Pro (Review), Poco F1 (Review), Nokia 7.2 (Review) and Realme X2.

Having said that, Oppo F15 doesn’t seem to be taking this competition lightly either. The smartphone’s highlights include 8 GB RAM, an in-display fingerprint sensor, VOOC 3.0 fast charging support and a 48 MP quad-camera setup. Price: Rs 19,990.

On paper, that’s the recipe for making a victorious smartphone. However, like many reviews and tests in the past have shown, all that glitters is not gold.

So I set out to find answers to some questions I had about the phone while writing my first impressions about it:

Is the camera app buggy or the is chipset-RAM partnership isn't working for the smartphone?

Does the 4,000 mAh battery works as impressively with the AMOLED display on top, as Oppo claims?

Is the phone’s glossy back prone to scratches?

Is Oppo F15 better than its competitors? The camera is a delight – mostly

I used the Oppo F15 for about 10 days and the camera is definitely one of its best features. Overall, the Oppo F15’s camera does over-saturate images, with special boosts to reds and greens in a picture, however, the Instagram generation would mostly appreciate the colours. Let’s look at the phone’s front and back camera one by one.

The Oppo F15 has a 16 MP selfie camera sensor at the front along with an f/2.0 lens. Oppo F15’s selfie camera is a delight – on most occasions. Daylight images clicked from the front camera of the Oppo F15 are bright, they are a little saturated but have acceptable colours, and they retain a lot of details. 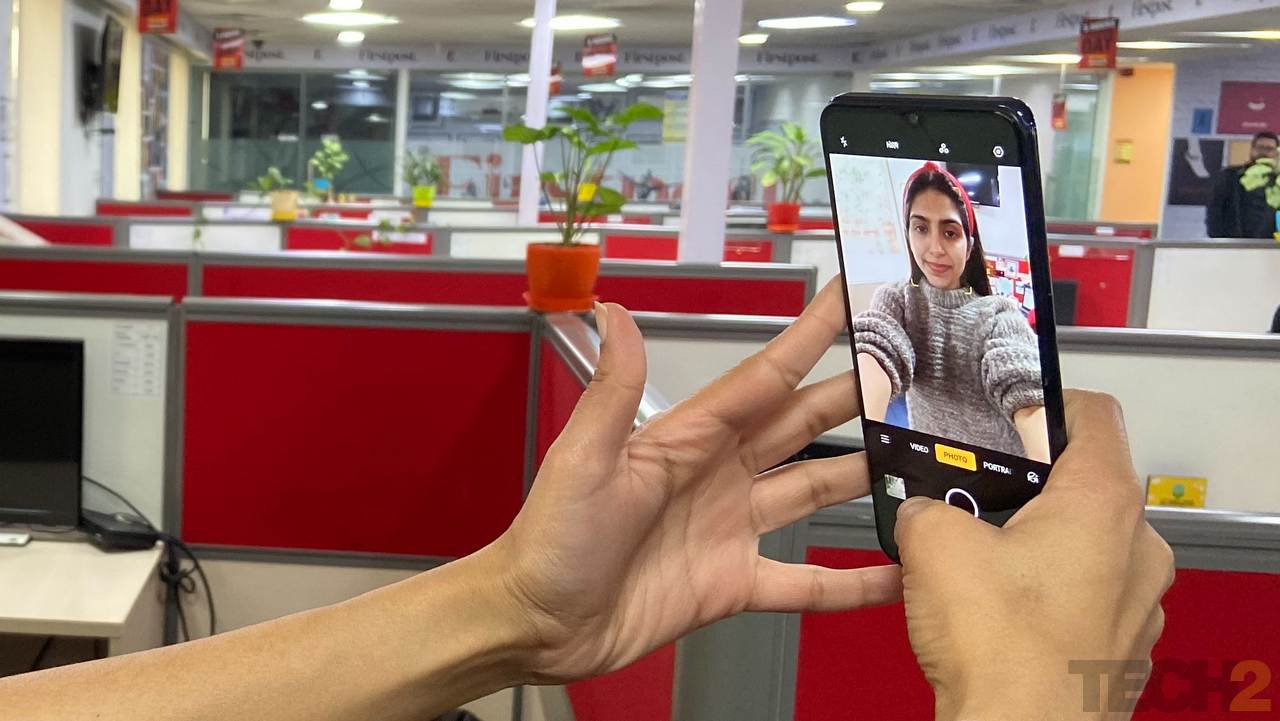 The front camera of the smartphone also comes with a portrait mode, which is great, has good edge detection, but it works best with a single subject in front of the selfie camera. Two subjects during selfie portraits confuse AI face detection software sometimes.

In the Flickr album below, you can check out some images, where Oppo F15 does not think my face is worth the focus. HDR is switched on by default in the camera app. But on the front camera, I liked pictures better with HDR turned off. The images without HDR look more natural and have better details. With HDR turned on, the focus also feels softer. You can switch the HDR mode on and off right from the camera app. Night-time selfies are just okay from the smartphone.

Moving to the back camera, the Oppo F15 comes with a quad rear camera setup, which includes a 48 MP primary sensor with an f/1.79 lens, along with an 8 MP secondary sensor with an f/2.25 ultra-wide-angle lens that has a field-of-view (FoV) of 119 degrees. There are also two 2 MP sensors for capturing portrait and monochrome shots, with f/2.4 lenses.

The Oppo F15 again has good overall image quality and colours when it comes to daytime photography. Images retain details quite well. Although, in some images in bright light, the background looked over-exposed. At night, however, Oppo F15 gets noisy outputs. Images clicked at night also look a little waxy sometimes. Oppo F15 has a quad-camera setup at the back. Image: tech2/Nandini Yadav

Also, while writing the first impressions of the device, I found lag in the video mode of the camera app. The phone tends to record an extra few seconds of footage because each time, the phone hangs when you shut the video. This lag continues to affect the device even after 10 days. There has been no update to patch this issue. 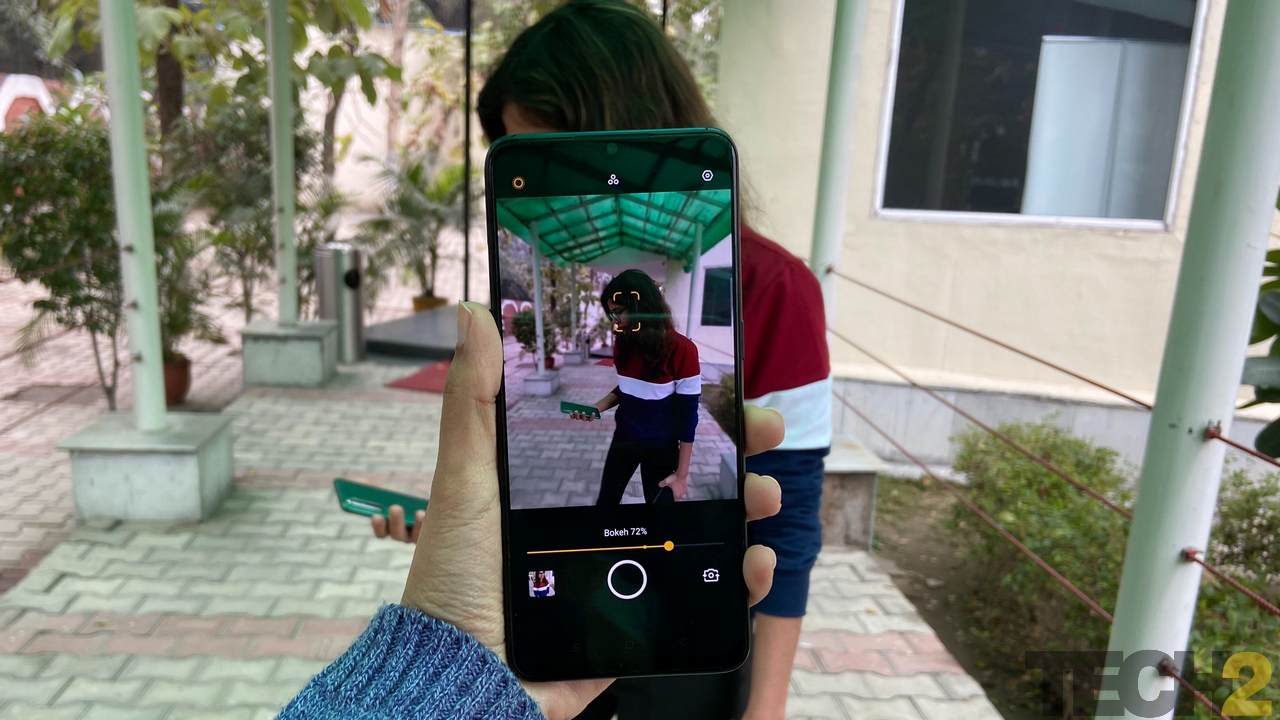 Oppo F15 rear camera has a toggle to adjust the amount of blur in portrait mode. Image: tech2/Nandini Yadav

However, when it comes to more performance-hungry tasks, you can tell that the Oppo F15 is struggling. Games like Call of Duty: Mobile, Asphalt 8: Airborne and PUBG Mobile run on medium graphics on the phone. There were also a few instances where the phone lagged while switching apps, or when one too many notifications came through at once. 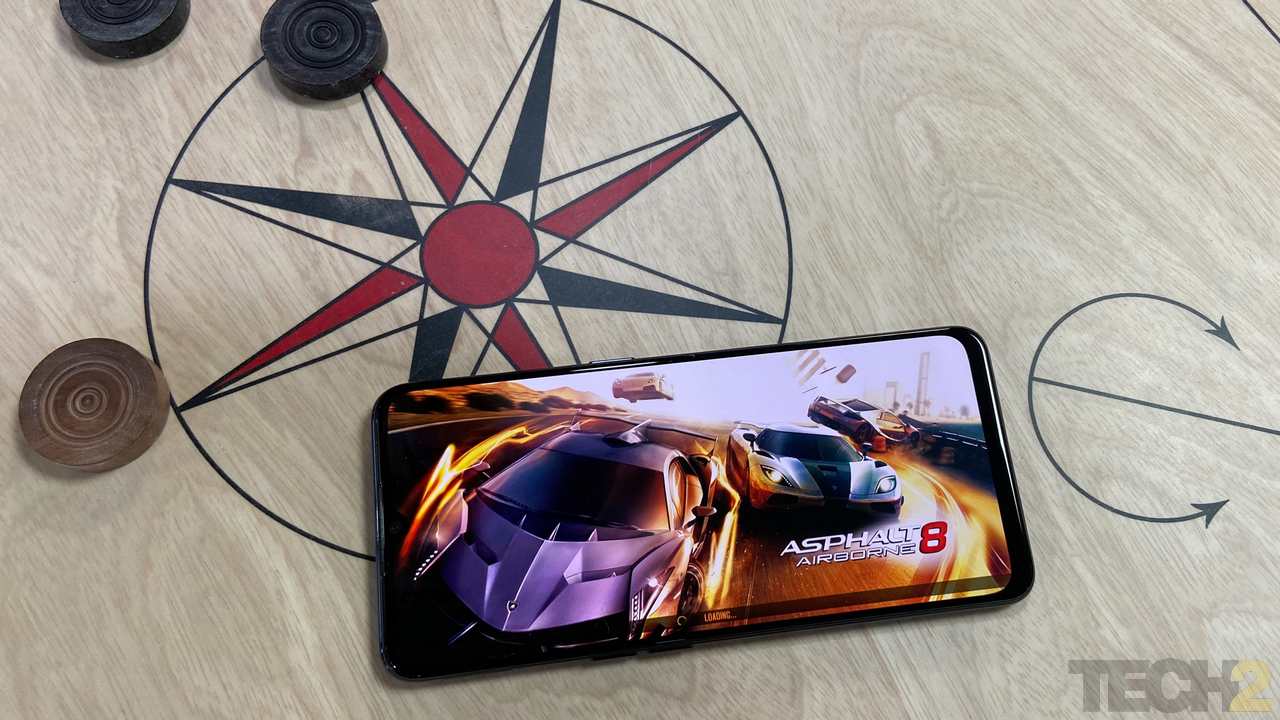 Having said that, the smartphone’s Game Assistant, which is automatically triggered when you open a gaming app is convenient since it blocks all notifications and calls during gameplay.

There is also a lag in the camera app, which I mentioned in the section above.

Besides that, I thoroughly enjoyed the phone’s in-display fingerprint sensor, which is super responsive. The face recognition is pretty quick as well. 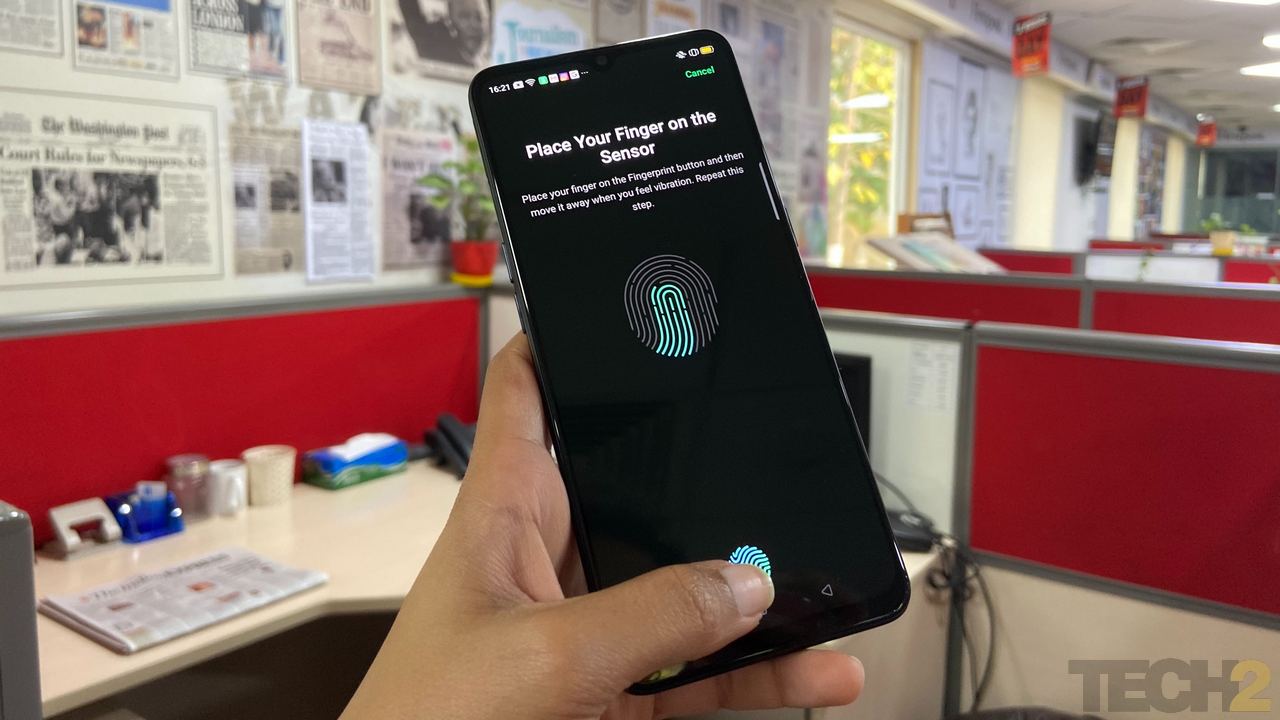 Overall, based on the performance, I would recommend Oppo F15 to people who are not looking at getting out extensive work from the phone. If you stick to a basic few apps and streaming videos and movies at max, it’ll work for you. However, I’d strictly say no for the device if you are a gamer.

Oppo F15 is all about its design

Design is an important aspect of the smartphone. And if I have to rate it, I would give the Oppo F15 8/10 for its looks. The phone has a tall-ish design, it's very sleek, and has a comfortable grip. It’s one of the few phones, which has a great looking black colour variant. This colour variant has gradients of blue at the back, which gives it a beautiful 3D effect. The phone has a glossy back, which can be an issue for the clumsies, but if you use the silicone case that comes bundled with the phone, that shouldn't be a problem.

In the initial few days, when I just started reviewing the device I was wondering if this phone would get too many scratches, but it got a hell lot of smudges and dust but not a single scratch. It resisted scratches for a good 10 days in the extremely-scratch-prone-area that my handbag is. Oppo F15's back attracts a lot of dust and smudges. Image: tech2/Nandini Yadav

But if you noticed, I did deduct two points from design despite liking it so much and that’s because of the two things I thought were ergonomic flaws of the Oppo F15. One, when you grip the phone from the bottom, which is the natural grip, reaching the power button and volume rocker isn’t easy. I needed to reposition my hand every time to do so.

Two, the camera setup at the rear is housed on a vertical platform at one corner, and while it looks good, placing the phone on its back makes it wobble. That camera setup is protruding out a little too much for my liking. Oppo F15 has a 6.2-inch AMOLED FHD+ display, which has good colours and is bright enough to be legible even in sunlight. The size of the display is also quite good for watching videos and playing games.

The bezels around the display are really thin. And although there is a waterdrop notch on top, which houses the selfie camera, it’s quite tiny and you will soon stop noticing it as well. 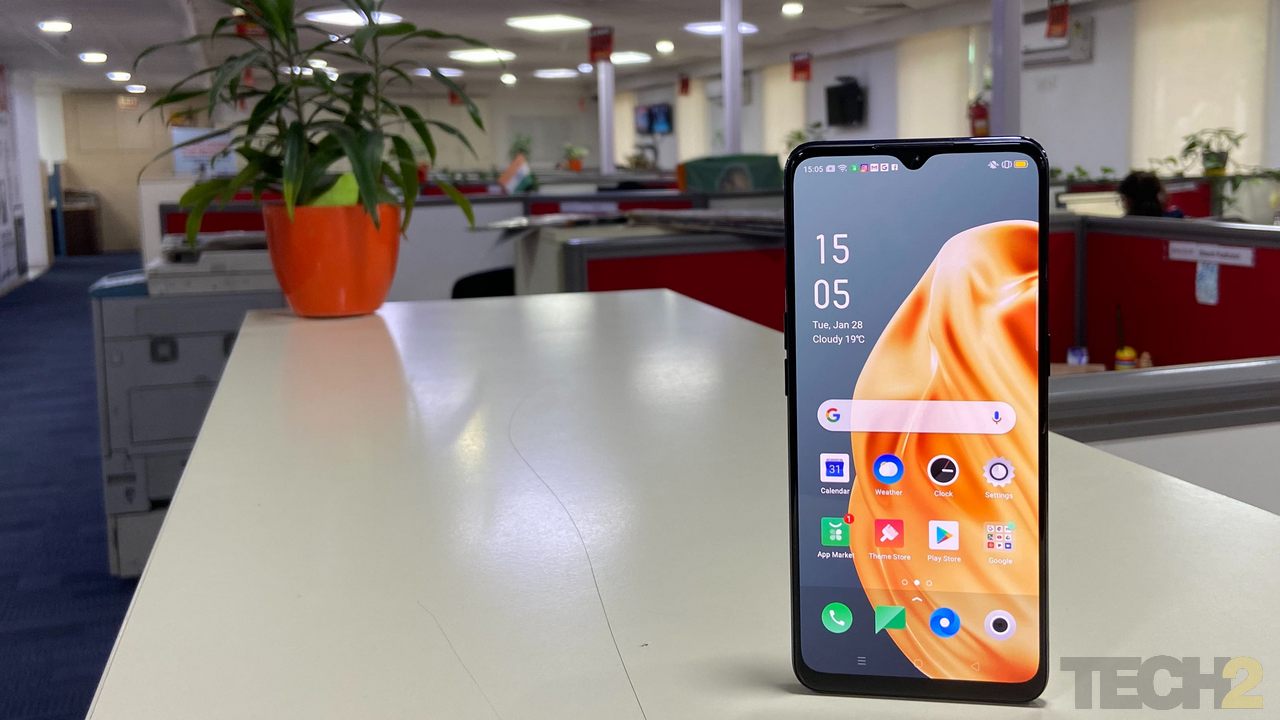 ColorOS 6.1 is bloated with pre-installed apps

Unless you have been an Oppo user, ColorOS is not something you will quickly get used to, or even like. Personally, the overly colourful icons in the UI don’t appeal to me.

The Oppo F15 runs Android 9-based ColorOS 6.1. Oppo says that the smartphone will be upgraded to ColorOS 7 in February 2020. The smartphone’s UI comes plagued with a bunch of pre-installed apps. Besides the bloatware, you also keep getting a lot of notifications from random apps, which you will have to disable from Settings.

There was no visible stuttering in the UI while scrolling or switching apps.

Oppo F15 is powered by a 4,500 mAh battery with support for VOOC 3.0 Flash Charge. Out of habit, I frequently switch between Instagram, Twitter, Slack, Gmail, Outlook and Spotify through the day, and with this social media-obsessed behaviour, the phone easily lasted me a day and a half. The day I was testing a lot of games on the phone, it lasted a little over a day. However, on the days of really light usage, the phone’s battery life also went up for two days.

Charging the phone is such a quick job, it especially feels so to an iPhone user. I recorded that the Oppo F15 charged up from 6 percent to 85 percent in 50 minutes. The Oppo F15 is for you if you primarily look for design, camera and good battery on a smartphone. However, if you are looking for a power-packed smartphone which is fast and handles graphic-demanding games well, then look away, this one’s not for you.

While Redmi Note 8 Pro (Review) probably has worse UI than the ColorOS, if you are able to ignore that or if you are already used to it, I would recommend it over the Oppo F15 for overall-performance.

There is also Redmi K20, which offers great design, camera and performance. Another alternative to Oppo F15 is the Realme X2, which also offers a much neater UI too.

You could also wait for the Poco X2, which is launching on 4 February, which will likely be priced in the same price segment.