Oppo has released its first smartphone of the year. Called the Oppo F15, the camera is, of course, one of the highlights of this device. It has a 48 MP quad-camera setup at the back and a 16 MP selfie camera. Besides that, the device comes with 8 GB RAM, an in-display fingerprint sensor, and VOOC 3.0 fast charging support. The price: Rs 19,990.

However, when you hear about a new device, the first question naturally is, 'is it worth the money'? Well, I will know the worth of the device, and if it's the best in its segment, once I have reviewed the phone, which will be very soon. But after spending a few hours with the phone, here's everything I could investigate about it.

Oppo F15 comes in two colour variants —  Lightning Black and Unicorn White. The white variant is very similar to the colour trend Huawei started with the P30 Pro (Review), the black variant, on the other hand, is the one I got for review and I absolutely loved it. Normally, I find the black variants boring, but the shades and gradients of blue in the Oppo F15's black variant lend it a pleasing look.

Having said that, dust and smudges is a BIG problem at least in this colour variant. The phone comes bundled with a transparent silicone case, and I advise to use it at all time.

Ergonomically, the phone has a tall-ish design, it's very sleek, and has a very comfortable grip. The glossy back can be a slight issue for people with butterfingers, but if you use the silicone case, that shouldn't be a problem either.

Oppo F15 has a glossy back. Image: tech2/Nandini Yadav

I haven't managed to scratch the device in the brief time I have used it, but I have a hunch that I'll have at least a scratch or two on this phone by the time I am done reviewing it.

One hiccup I noticed in the design of the F15 is reaching the power button and volume button. With, at least, my palm size, I had to constantly reposition my hand from my natural grip to reach the buttons on the side of the phone.

Coming to the display, the Oppo F15 has a 6.2-inch AMOLED FHD+ display, which has good colours and is bright enough to be legible even in sunlight. The size of the display is also quite good for watching videos and playing games. It has a waterdrop notch, that houses the selfie camera. Oppo F15's cameras are clearly its highlight. On both rear and front camera, I noticed that the colours were slightly boosted, however, details are well-maintained in most images. Let's me talk about both cameras one by one. 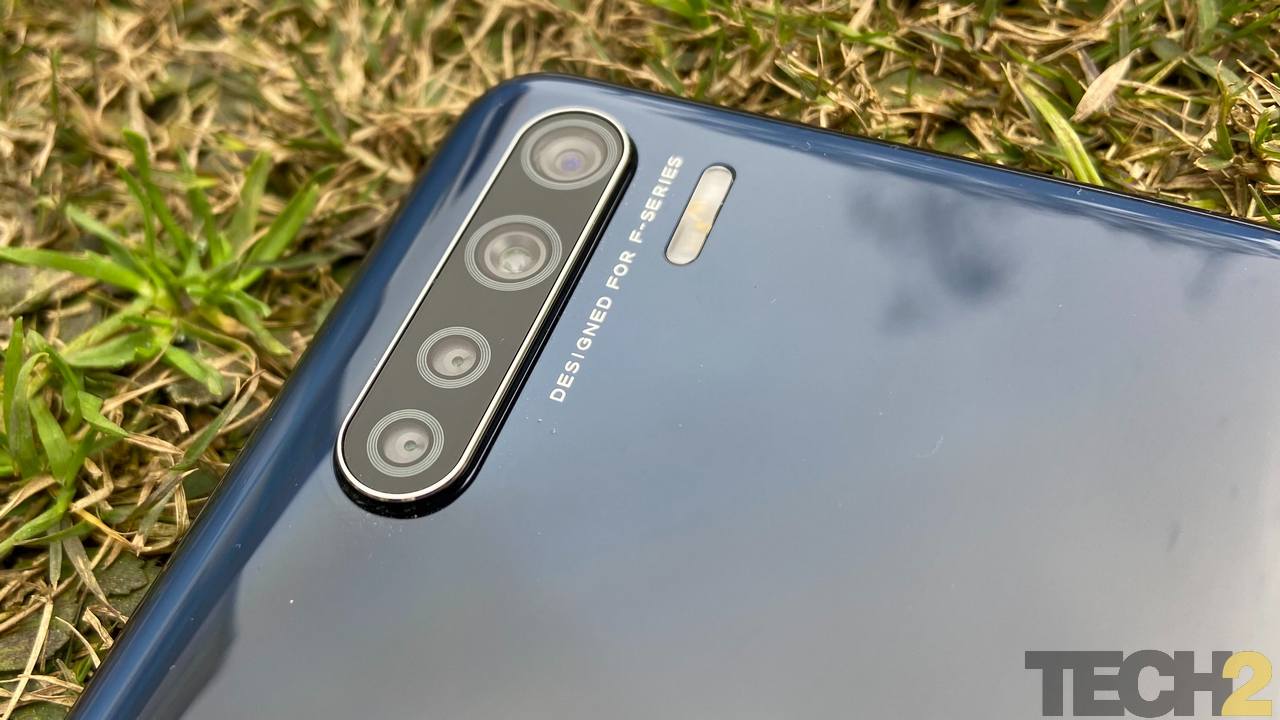 Oppo F15 sports a quad-camera setup at the back. Image: tech2/Nandini Yadav

On the front, the Oppo F15 has a 16 MP sensor for selfies. In bright lighting condition, the selfie camera boosts the colours too. However, the autofocus on it is quick, and it retains a lot of details. The selfie camera also has a portrait mode. Though I hardly spent any time with the phone, I did find out that while edge detection works quite well when there is one subject in the frame, the detection takes a hit when there are more than two people in the portrait selfies.

You can see an example of that in the Flickr album below. The rear camera of the Oppo F15 includes a 48 MP primary camera, an 8 MP wide-angle lens, a 2 MP depth sensor and a 2 MP macro lens. In the few images I clicked from the phone right now, I really liked the picture quality, edge detection in the portrait mode (even with more than one subject in the frame), and the details, the saturation level was still a little boosted. Also, in some pictures in bring light, the background in the image also looked over-exposed.

I will be reviewing the Oppo F15 starting today and will do a more in-depth review of the camera. More details coming soon!

Oppo F15 is powered by MediaTek Helio P70 chipset, coupled with 8 GB RAM and 128 GB storage. Running the device is Color OS 6 based on Android 9 Pie. While I couldn't have possibly tested the performance of the device in a few hours I used the device, I did go through the phone, launched various apps, logged in to my Gmail, downloaded some new apps, and used the camera.

In the brief period I used the phone, I found that the UI of the phone is pretty smooth, the basic performance is good too — there was no lag while switching between apps. However, in the camera app, especially in the video mode, you tend to record an extra few seconds of footage because each time the phone hung when you shut the video. Besides that, swiping through the phone was pretty smooth, but the ton of bloatware on the phone is stressful.

Fuelling the Oppo F15 is a 4,000 mAh battery, which comes with support for VOOC flash charge 3.0. According to Oppo, in just five minutes of charge, the phone can give up to 2-hour of talk time, a claim I shall test in my review.

My initial impression of the Oppo F15 is generally positive. I am worried about the lag I found in the camera app, but I am hoping to find out if that's a bug in the app, or if the chipset-RAM partnership isn't working for the smartphone. I am also looking to find out if the 4,000 mAh battery works as impressively with the AMOLED display on top, as Oppo claims.

I am also waiting to see how scratched and dirty the phone gets by the time I get to writing the review of the Oppo F15.