OnePlus had remained a step ahead of all leakers by revealing key OnePlus 6 design elements via its management team.

OnePlus's hotly anticipated flagship smartphone, the OnePlus 6, will be unveiled to the global audience on 16 May in London. The company has been bombarding fans with bits and pieces information about the device in the form of teasers. As per reports, this controlled reveal of major OnePlus 6 features has generated an insurmountable hype for the smartphone. 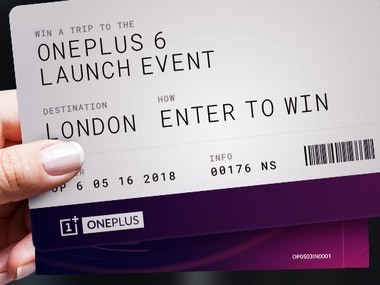 In an interview with OnePlus co-founder Pete Lau, Forbes managed to find out more about the upcoming flagship.

"The design of OnePlus phones has been one of the most attractive things about the company. Pei is tight-lipped about the hardware that will be properly revealed in May but he agrees that OnePlus design is something the company takes pride in, even down to the side switch called the Alert Slider," said Lau

Delving in more about OnePlus' signature alert slider, Pete Lau said, "While other phones, like the iPhone, for instance, have a two-position sliding switch to turn the ringer on or off, the side switch on the OnePlus 5 slides up and down through three positions, giving more versatility."

Over 1000 tickets sold out in under 10 hours! We can't wait to see you all on May 16. Learn how else to watch the #OnePlus6 launch. https://t.co/5TPq08jw9P pic.twitter.com/UMHzJqcTtd

The Forbes report also said that OnePlus had remained a step ahead of all leakers by revealing key OnePlus 6 design elements via its management team. The report says that OnePlus had also done a great job of harnessing support from its fans by engaging them on social media and putting up a thousand tickets on sale for them to attend the event.

In India, the OnePlus 6 will be launched on 17 May while the sale will begin from 21 May onwards.

If you wish to read about all the leaks, teasers and rumours about the OnePlus 6, click here.