To conclude, Sarvikas noted that the focus was on the idea that “You can tell the best stories with your Nokia Phone”

Nokia unleashed a barrage of products on the world at MWC 2018. These products ranged from the humble Nokia 1, to the quirky 8110, all the way to the high-end Nokia 8 Sirocco.

As a company, Nokia has had a rich history of churning out incredibly rugged and well-designed phones that matched the sentiment of the market in their time. Nokia did completely miss the bus on the touch-screen smartphone, and a misguided — in hindsight — attempt to bring back the brand in a new Windows Phone-powered avatar ended in disaster. 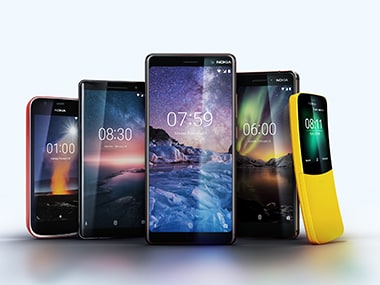 The 2018 Nokia family unveiled at MWC

The hardware side of things, the phones, is being managed by HMD Global, a relatively new company, but one that’s still got a lot of that old Nokia blood flowing in its veins.

At MWC, we got a chance to catch up with Juho Sarvikas, Chief Product Officer at HMD Global, and attempted to understand the driving factor behind the reborn Nokia brand.

Android One: The Nokia connection

Sarvikas also touched upon another feature that’s unique to Nokia, the fact that its entire smartphone lineup is powered by Android One. Android One, a program by Google for bringing a stock Android experience to smartphones, has been very well received by the enthusiast community at large.

“Android One allows us a faster time-to-market with the latest Android features due to being a preferred partner with Android”, says Sarvikas, adding that security updates are also much easier and timely with Android One.

Feature phones: The future of Nokia?

On the Nokia 8110 slider phone, aka the phone from The Matrix, Sarvikas said that they’re still working with partners to bring popular apps to the device. The phone doesn’t support apps like WhatsApp, after all. He added that we might even see a fresh design for a smart feature phone next year, but that they’re waiting to gauge the response. He did acknowledge that people tended to prefer smartphones in the price of the 8110 ($97).

Despite that, he believes that “feature phone loyalists” would prefer options like the 8110. “Low-cost feature phones for people who want basic functions on a phone will be in big demand,” said Sarvikas.

Another area that Nokia is interested in is the accessories market. Yesteryear’s Nokia was big on accessories, a formula that worked very well at the time. Nokia plans to bring that idea back to life. “From audio to power, we plan to bring them [accessories]”, says Sarvikas.

To conclude, Sarvikas noted that the focus was on the idea that “You can tell the best stories with your Nokia Phone” and that “camera capabilities are key for us.”

Nokia has evolved and certainly grown significantly since its Windows Phone days.

One thing is clear, however, Nokia is back, and it’s here to stay.