Nokia 3310 4G variant comes with single SIM card slot and is powered by a 1,200 mAh battery and provides 5 hours of talk-time on 4G network. 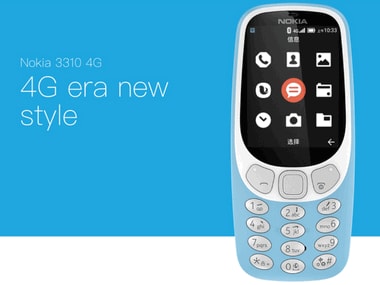 According to a report by PhoneRadar, the smartphone has similar looks to its previous versions. The Nokia 3310 comes with 2.4-inch display with 320 x 240 pixels resolution. It will be available in two storage variants of 256 MB and 512 MB, the storage can be expanded up to 64 GB using an external microSD card slot provided on the phone.

Nokia 3310 4G variant comes with single SIM card slot and is powered by a 1,200 mAh battery. According to the report, the smartphone is rated to provide 15 hours of talk-time on 2G network and 5 hours on a 4G network. The standby time of the smartphone is 12 days on 4G and 15 days on 2G.

As reported earlier the smartphone runs on an operating system developed by Alibaba Group, called YunOS. The previous version of the device featured S30 Plus OS.

The smartphone features a 2 MP camera on the rear side of the device. The dimensions of the smartphone are 117 x 52.4 x 13.35 mm and it weighs 88.1 g. Connectivity options include 4G LTE, Wi-Fi, Wi-Fi Hotspot, Bluetooth 4.0, FM Radio, 3.5mm Audio Jack, and a MicroUSB 2.0 port. It will be available in Blue and Charcoal colour variants.