ISRO chairman AS Kiran Kumar on partnerships with private industries, manned missions, and colonising other planets

ISRO chairman Dr AS Kiran Kumar spells out the many exciting challenges facing his team of scientists in the field of space research.

The world is moving in the direction where human beings can well become inter-planetary species with the Moon becoming an intermediary base for manned missions into the outer reaches of the solar system. In an exclusive interview, ISRO chairman Dr AS Kiran Kumar spells out the many exciting challenges facing his team of scientists in the field of space research. Yesterday you mentioned in your talk at FICCI how in the very near future, private players are expected to get into the business of launching satellites. Will they be investing in this or will the government remain the major investor?
Are you talking about companies within India or are you referring to international companies. In our country what we are trying to do is starta joint venture with Indian companies. The key partner will be ISRO and a consortium of industries. We are trying to set this up this mechanism though we still have a number of steps to go. What is expected is that looking at a 2020 time frame, this joint venture will be able to produce PSLV and launch satellites through the PSLV.

You expect this to happen by 2020?
That is our target though we still have a number of steps, formulating that and we need to get some clearances.

Which are some of the companies you are looking at ?
There are a number of companies. There is Hindustan Aeronautics Ltd, Godrej and Larsen and Toubro and a number of others. They are currently providing inputs for the launch vehicles. In fact 80 per cent of our fabrication activity happens in the industry.

Are you also seeking the help of DRDO?
No.

Will these companies also be providing financial inputs?
They will have to do that. It will be a joint venture with joint investments by all these entities.

Why is this an appropriate time for private players to enter?
We have reached a stage where the number of launches for our own use is increasing. With the introduction of new technology, the opportunity of launching of other satellites has increased. We need to meet our own requirements but this is a good time for private companies to enter. 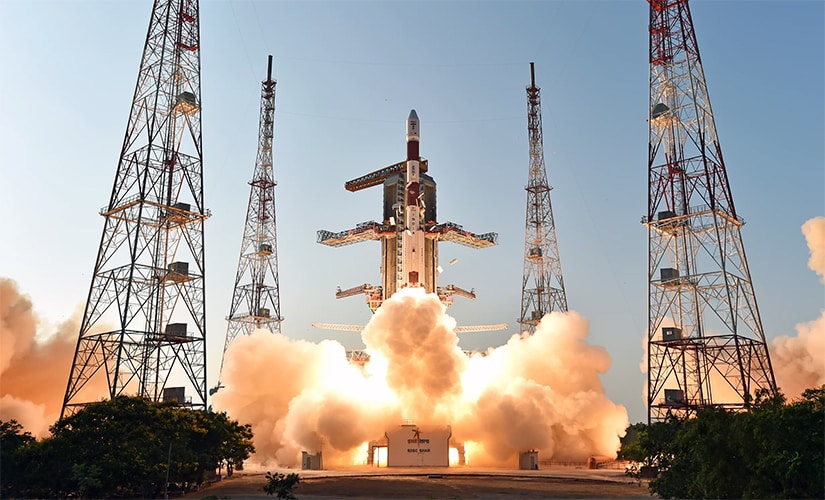 The PSLV C-27 mission blasting off with the IRNSS-1D navigation satellite on board.

You talked about other satellites. Can you elaborate on this?
We have already launched 209 satellites for 28 countries. Our primary objective is putting our national satellites into space. In each of the launch vehicles, apart from the a primary satellite, there is an opportunity for carrying more satellites. We have excessive capacity, large, medium size and small satellites. We are trying to use this capacity also.

Satellites are being used for a variety of purposes?
Yes. Satellites are being used for making earth observations, looking at land, atmosphere, ocean observations. Satellites help in a series of activities- cyclone tracking, providing information for fishermen, water bodies monitoring, crop yield assessment, geo-spatial information, urban planning, monitoring of road construction, providing geo-spatial data on activities of MGNREGA. Of course it is of great use in the field of communication whether it be in the area of DTH, VSAt connectivity, telephony, broadband connectivity and also in location based services using navigation. People are talking about making a consortium of satellites to provide internet services. If space activities were not there, we would be leading very different lives because satellites have helped transform every aspect of our lives.

You mentioned how satellites have helped map water bodies. Has ISRO provided information about our shrinking of water bodies and how we are moving in the direction of becoming a water scarce nation. NASA released a map on how we are fast losing our ground water resources?
We help to map water bodies. There is a portal called WRIS (Water Resources Information Resources). The Central Water Commission is kept in the loop of the availability of water in the country and all government organisations have access to this website.

The question I am trying to ask you is it was NASA that revealed images of how smog and air pollution had spread across all of north India. Why were these images not given to us by ISRO?
We are also doing providing specific information. Images of pollution have been given to the Central Pollution Board. There is a website called MOSDAC which gives information on this subject. We provide information to all the respective government departments and it is up to the departments to follow it up. The Ministry of Earth Sciences and the Indian Meteorology Department are all kept in the loop.

You are not in the business of issuing warnings?
That is not part of our agenda. A global image of Mars captured by MoM

Mission Mars has been one of the great success stories of ISRO. What have images of Mars revealed so far?
During these two years we have received data which we have made available to scientists and the general public at the International Space Science Data Centre located at Bangalore. The ISTRAC system in Bangalore has a deep space network that receives signals from satellites. This (deep space network) contains Chandrayan data (from the moon) and Mars data. All this data has been collected and made available to the research community. By virtue of the Mars Mission being in orbit, we are able to look at Mars in all its totality. We have more pictures of Mars as a total body compared to any other organisation.

Even NASA ?
They have fewer pictures. They (NASA) have gone very close to Mars. We have an elliptical orbit. We can look at its entirety. We have images of moons of Mars which are Deimos and Phobos. Based on this data, a number of pieces published in peer review journals have taken place.

We have more than one lakh Indians who are willing to go to Mars? They have applied … ?
All their names and addresses have been put in a silicon wafer microchip and that is being taken to the Mars.

But so far there is no life been found in any planet?
So far, nowhere else is there any credible proof of life as we know it. But if something is not known to us does not mean it is not there. 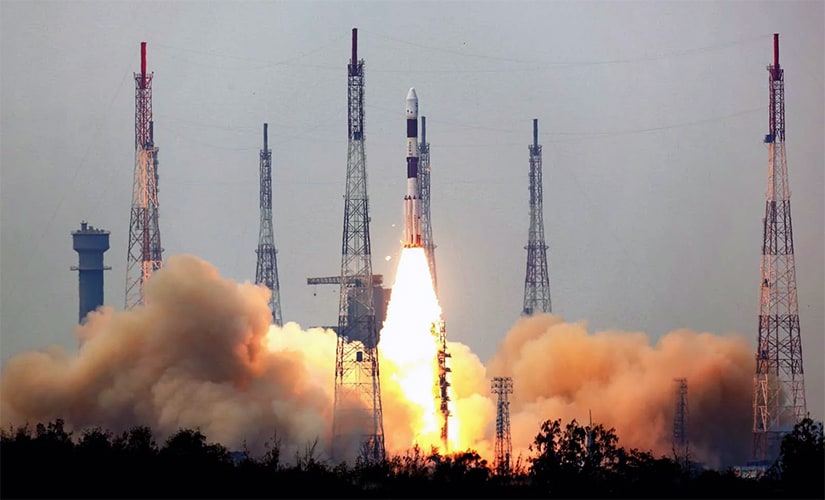 The PSLV-C30 mission lifting off with the AstroSat on board.

When is a Manned Moon Mission going to take place? China is forging ahead of us.
The Chinese have invested a lot of money. They have put a man into orbit. They have the equivalent of a space mission which they have built in space.

There are a number of steps we have to take before we put a man on the moon. We have to put a man in orbit and then bring him back safely. We have to ensure that all systems are in place. We have done some experiments such as the crew module recovery experiment and the space capsule recovery experiment. When a satellite comes back into earth’s atmosphere, it faces intense friction, have to ensure a good thermal protection system. All these are preliminary steps which we have done. We need a vehicle In order to build redundancies and robustness, all these require significant resources. But this is not a priority activity for us. We need to provide inputs for country’s activity.

How much money is required for a manned Moon Mission?
We need between Rs 20,000 to Rs 30,000 crore for a full fledged mission but this has to be sustained. We cannot do one mission, we need to have a sustained activity plan. We all have an interest but we have to balance between what we can afford at one point of time. As technologies keep changing and costs of this can come down. That is the advantage of time.

Can’t private players be brought into helping to finance a manned Moon Mission?
Private entities need to make large investments but one cannot see immediate returns for a private entity. But take the case of SpaceX. Its CEO Elon Musk is talking about space travel and he wants to make human beings into a multi-planetary species. This sounds very interesting. For example, we have found water in the moon but can this be accessed by human beings?
Right now the details have to be worked out. It can be used as a resource for habitation right there. If you want to make the moon an intermediary base for planetary travel, it can be used as a fuel and use it there. Transporting it from there to the earth will of course not be commercially viable.

But setting up colonies in space will be very expensive.
It will be very expensive. But when oceans became available for travel, the shipping industry started and then when an aircraft was made, aviation started and has become a huge industry. Space as a frontier will also be developed. People are willing to buy one way tickets to the Mars. There will be some people who will take advantage of this and make a business out of it.

What kind of revenues will ISRO earn from launching satellites. And will a stage arrive where ISRO will not depend on government resources ?
For that to happen, we have to increase capacity in a very significant way. From now, we are short of our own requirements. We don’t have enough capacity to build and launch more satellites and that is why we want increased involvement of industry so numbers can be increased. This is a challenging task.

Apart from launching, we are doing activities for societal good, for these things we need funding. We want industry to build capacity so they can support India’s requirements, plus market these capabilities for taking a share of the global market. They in turn can help launch satellites from other countries.

Will other countries be willing to enter into collaboration with private Indian companies?
We must be able to provide at effective cost because everyone wants to reduce costs, so returns are more. A lot of things going back and forth from other countries. 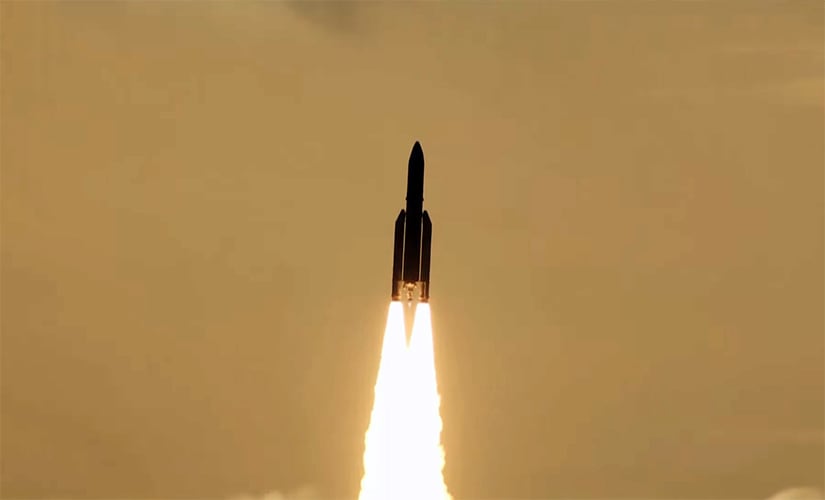 Arianespace Flight VA238 with ISRO's GSAT-17 on board, lifting off from the Spaceport in French Guiana.