With Apple's iOS 11.2 beta 3 a pop-up notification will show up on the screen explaining the how the Control Center toggle really functions.

Apple's new iOS 11.2 beta update released on 15 November has added a new pop-up to let users understand how the Wi-Fi and Bluetooth toggle works. The toggle feature on both the Bluetooth and Wi-Fi which only disables them temporarily was first introduced in iOS 11. As we already know tapping off the the Bluetooth or Wi-Fi toggles in the Control Center does not turn it on or off completely. When switched off via the toggles, Wi-Fi will disconnect all current networks but will still be available for AirDrop, Personal Hotspot and location accuracy. Bluetooth on the other hand disconnects from connected accessories will remain connected to other devices like the Apple Watch and the Apple Pencil. Personal Hotspot and Handoff too will still be connected.

With iOS 11.2 beta 3 a pop-up notification will show up on the screen explaining the how the Control Center toggle really functions. However, according to the MacRumors report, Wi-Fi will remain disabled unless Wi-Fi is reactivated using Control Center or it's 5:00 am local time or if the iOS device is restarted. Similarly, the report also states that Bluetooth will remain disabled unless the above-mentioned conditions force it to be activated. 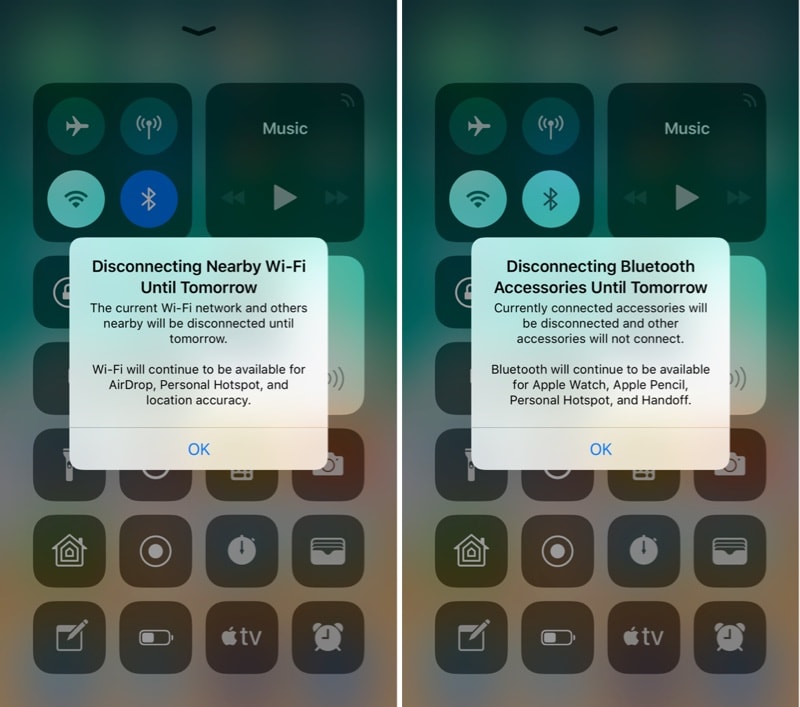 For permanent disabling of the Bluetooth and Wi-Fi, one needs to go to the Settings app and switch off the Wi-Fi and Bluetooth manually. The iOS 11.2 update will also be unlocking 7.5 W fast wireless charging on the iPhone 8, 8 Plus and iPhone X.

Apple is planning to introduce new pricing schemes to developers for subscription apps in iOS 11.2

After the release of iOS 11.2.5, Apple has stopped signing for three older versions

Apple iOS 11.2.5 with HomePod support is out and Siri can now read you the news, but there's a catch