GCCS 2017 was attended by around 3,900 delegates, including 800 foreign delegates, with 139 countries being represented in the event. 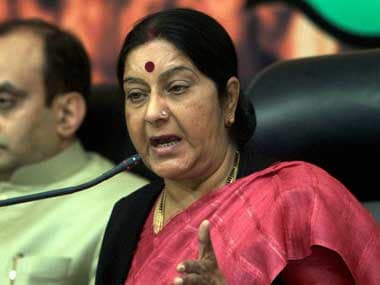 "The Digital India programme is focused on three key vision areas," Sushma Swaraj said while delivering the valedictory address at the closing ceremony of the Global Conference on Cyber Space (GCCS) 2017.

"One, infrastructure as a utility to every citizen, two, governance and services on demand, and three, digital empowerment of citizens," she said. Sushma Swaraj said that the Digital India programme has the potential to truly transform India from a developing to a developed knowledge economy.

She also pointed out that the very dynamic and evolving nature of cyberspace has brought cyber issues to the centre-stage of development polity, crime prevention and investigation, expansion of economy and trade, national and international security.

"The fact that all forms of activities — political , social, economic and development - which are now conducted and connected in cyber space has not only expedited the pace of growth, but also brought forth a new set of challenges for which no pre-set solutions exist," Sushma Swaraj said while dwelling on threats in the digital space.

"The lack of borders in cyberspace and the anonymity of the actors has ensured that the traditional concepts of sovereignty, jurisdiction and privacy are challenged," she cautioned.

She said that the global gathering of cyber experts in the GCCS was a testimony to the fact that the nations need to engage with each other to redefine concepts and align traditional processes to the new paradigms.

"India is committed to the objective of having an open, safe, secure, inclusive, democratic and dynamic cyberspace that responds swiftly to challenges," the External Affairs Minister, who is known for her active use of Twitter and has over 10 million followers on the social media platform, said.

Stating that the growing significance of cyber issues in the international arena could not be exaggerated, she said that this was reflected in the growing conversations across the world at all high level summits, interactions and conferences.

"That there is hardly a meeting between heads of states which goes without a discussion on cyber issues points to the growing penetration, significance and criticality of Internet to the social, economic and cultural lives of the nations," Sushma Swaraj said.

At the same time, she said that cyberspace has been infiltrated by malicious actors looking for opportunities to exploit vulnerabilities. "The anonymity, borderless spaces and speed have helped these elements to carry out nefarious activities ranging from cyber espionage, concerted attacks on networks, data theft, infringement of privacy and extremist propaganda to name a few," she stated.

Sushma Swaraj said that the disappearance of traditional concepts of borders and the speed of proliferation of crime has heightened the need to enter into agreements and arrangements among countries for cooperation at various levels.

"Further as more and more developing countries take to digital space to carry out developmental activities, new mechanisms for international cooperation need to be evolved," she said.

"It is imperative that the states engage with each other diplomatically in increasing instances of cyber attacks to defuse tensions arising in the wake of challenges of attribution," the External Affairs Minister said.

Stating that India has taken steps to promote international security and stability in cyberspace through a framework that recognises the applicability of international law, in particular the UN Charter, she said: "We are committed to a multi-stakeholder approach of Internet governance that is transparent and accountable to its stakeholders, including governments, academia, civil society and industry."

GCCS 2017 was attended by around 3,900 delegates, including 800 foreign delegates, with 139 countries being represented in the event. This was the first time that the event, which was first held in London in 2011, was organised outside the Organisation of Economic Cooperation and Development (OECD) countries.