India has lost an estimated Rs 21,000 cr over five years because of internet shutdowns; that's Rs 2.45 cr down the drain per hour

The debate over Internet shutdown does not only extend to civil liberties. There is also an enormous economic cost to shutdowns.

Telecom operators, on average, lose Rs 2.45 crore every hour in every circle there is an Internet shutdown or throttling, according to industry body Cellular Operator Association of India (COAI), which counts Bharti Airtel, Vodafone Idea and Reliance Jio as members.

The impact on business adds another dimension to the debate over Internet shutdowns and whether modern democracies should resort to them to quell unrest or potentially combustible situations. In recent times, the Indian government has implemented a shutdown or throttling of the Internet more than any other government. In 2018, there were 134 instances of shutdowns, while in 2019, there were 104, as per Internetshutdowns.in, a website that tracks shutdowns in India, and is operated by the Software Freedom Law Centre (SFLC).

Jammu & Kashmir, which saw the revocation of Article 370 in August, has been, by and large, on a total Internet shutdown barring a few relaxations.

(Also read: Internet shutdowns: The legality of section 144 of the code of criminal procedure) 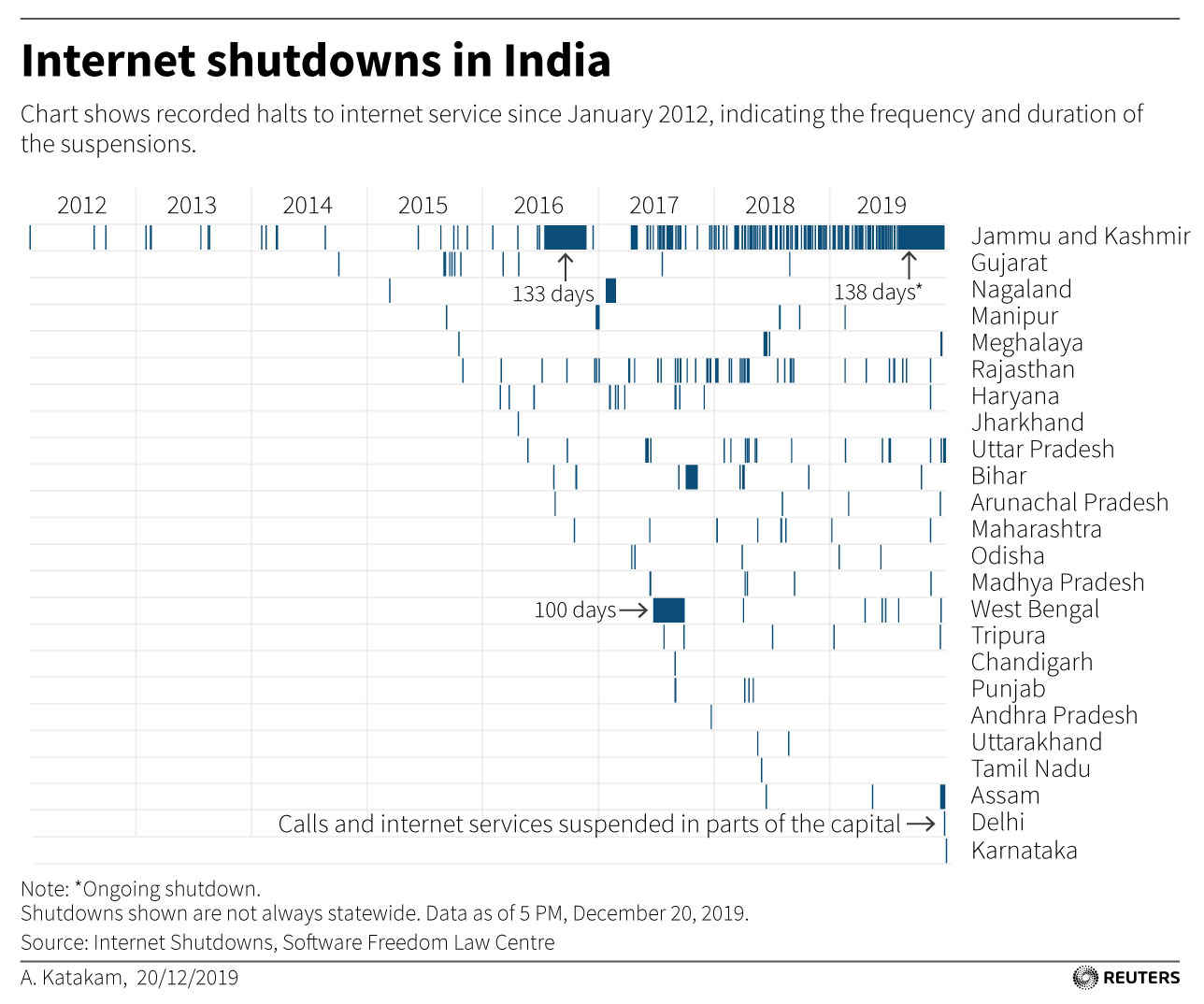 However, when it comes to monetary losses, it isn't just telecom companies that are hit. The Internet has become the lifeblood of several businesses, not the least of which is the app-based economy — comprising e-commerce majors, cab operators, food delivery services and the like.

To the Rs 2.45 crore figure, one could add another 50 percent to account for the loss of businesses in and from the area where an Internet shutdown takes place, says Rajan Mathews, Director General of COAI. That brings the estimated total loss in business per hour to about Rs 3.67 crore.

In fact, according to a 2018 study by Indian Council for Research on International Economic Relations (ICRIER), Internet shutdowns added up to over 16,000 hours between 2012 and 2017, costing the Indian economy about $3.04 billion (over Rs 21,000 crore).

Stories from the recent Delhi shutdown

Restaurants in Delhi's Chittaranjan Park area lost about 100 orders coming from Jamia Nagar and Okhla because the government ordered an Internet blackout in order to restore peace and clamp down on communication that could add to the social unrest.

But Pawan Kumar, a Zomato rider, wasn’t sweating over it. "It's good that the Internet was shut down. Why should we risk our lives to earn Rs 30 per order," he said. "In any case, the restaurants won't deliver."

Restaurants in CR Park's two markets saw a dip in business of about 30-40 percent because the Internet shutdown. “Almost half of our customers order online. That fell dramatically, and our online sales were down by 50 percent,” said Dushyant Sharma, owner of Lucknow Central.

“Sahab, the connection was so bad that either I was not getting orders or the map would not work,” said Vikram Kumar, a Delhi-based Uber driver, who drives only in the night. “Dhanda manda tha (business was bad), lagbhag (around) 40 percent down,” he added. “Aur entertainment bhi nahi tha (there was no mode of entertainment),” Kumar, who watches movies or news on his phone in his free time, rued.

The business cost of shutdowns

“These shutdowns are nothing short of being crazy,” said Ananth Padbanabhan, Fellow — Technology and Society, at the Centre of Policy Research. “If Aadhaar is the vehicle to get food to people, the Internet is the vehicle of communication, and now of businesses, too.”

Padbanabhan explains that small businesses have increasingly come to rely on the Internet to generate leads, advertise and get clients and it is they who get hit the hardest. “In Kashmir, we are already seeing that… Businesses are shutting down because of the lack of Internet,” he said. 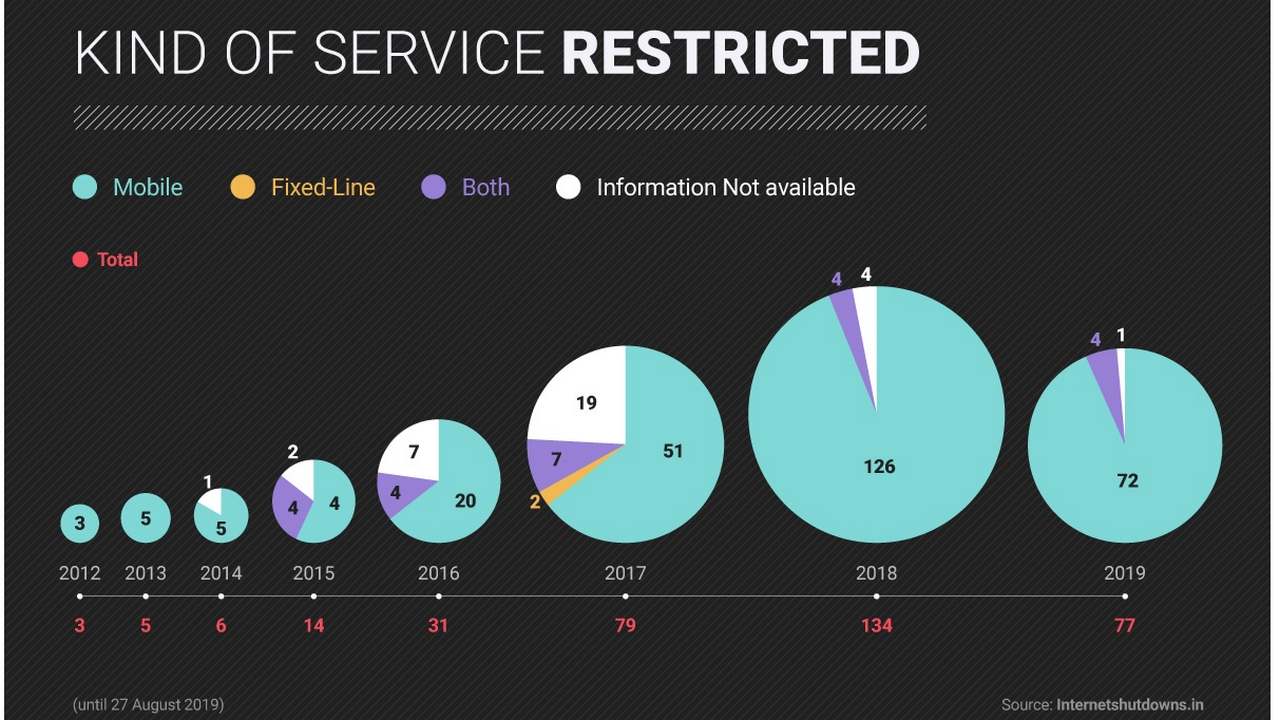 The head of the government affairs at a large e-commerce company says that traffic on its website fell by 10 percent after the Internet shutdown arising from the anti-CAA protests.

E-commerce companies not just get affected because of fewer orders. The law and order situation takes a toll on logistics as well, making it difficult for them to deliver orders on time. “Deliveries can get delayed by two-three hours. Once there are delays, there are higher chances of cancellation,” the executive said.

The impact on the supply chain is particularly difficult for business where timely delivery is of utmost importance.

Such as in the case of MilkBasket, which relies heavily on cloud-based technologies to delivery milk to its customers. “Customers could place orders but our field force could not access the Internet during day and night,” said the company’s co-founder and CEO Anant Goel. This impacted MilkBasket's order volumes, even though Goel says that the company managed to restrict the revenue loss to only 5 percent, thanks to some “last-minute hacks”.

Online grocer Grofers, too, saw a dip in business, particularly from Lucknow, though it made up for volumes over the following weekend, according to co-founder Albinder Dhindsa. 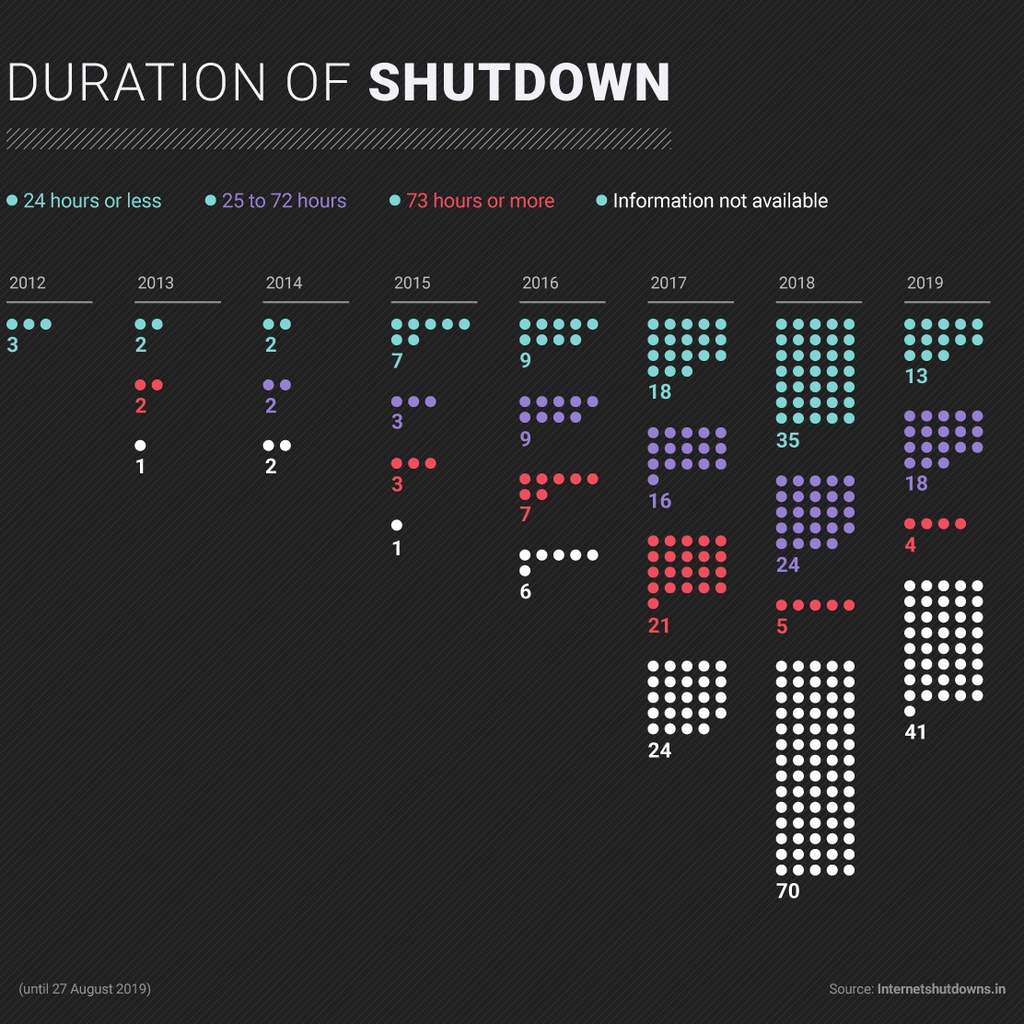 “I had to make two important payments and the failure to do so could have resulted in severe damage to my reputation,’ said Saurav Chakravorty, the owner and director of Ranchi-based outdoor advertising firm Art Cottage. He was in Delhi when the Internet shutdown took place. “Thankfully, the phone lines were working. I asked my brother in Ranchi to transfer the money to the recipients.” With 2019 being a particularly bad year when it comes to Internet shutdowns, experts say that the government should be cautious on when, or how often, it resorts to the exercise.

According to a Deloitte estimate, economies with low and medium Internet connectivity could lose about $0.6 million and $6.6 million per day per 10 million population. For a “highly connected” economy, this could go up to as much as $23.6 million.

COAI's Mathews said governments should resort to an Internet shutdown only under severe circumstances. “Shutting down the Internet is a blunt instrument… A whole lot of commerce and business gets shuts down.”

From Karauli to Jodhpur, Rajasthan seethes with communal violence