Huawei Honor View10 First Impressions: A solid package that is likely to push AI-powered experiences to the masses

Has Honor managed to improve upon 8 Pro and does it give stiff competition to its rivals? Let’s have a quick peek at how the Honor View10 stacks up.

Huawei is all set to launch its upcoming smartphone under the Honor brand with its Huawei Honor View10. The company launched the View10 alongside its more budget offering, the Honor 7X at a launch event that was held in London earlier this month. View10 is likely to be the successor to Huawei’s previous offering in the form of Honor 8 Pro that was launched earlier this year. Huawei sent us a review unit for the View10 and we have been playing around with it for last two days to see how it stacks up against its competition. One thing to note here is the fact that Huawei has not announced the price of the device which will play a significant role in how the device is received in the Indian market. Following up on the Honor 8 Pro is a tough act because it managed to go toe-to-toe with flagship devices such as the OnePlus 5 when it came to camera performance and daily usage.

We reviewed the Honor 7X and concluded that it is proving a great challenger to Xiaomi Mi A1. Similar to the 7X, the View10 looks like a solid device and could prove a worthy competitor to other companies like Moto and OnePlus in the Mid-range segment. Has Honor managed to improve upon 8 Pro and does it give stiff competition to its rivals? Let’s have a quick peek at how the Honor View10 stacks up.

Right off the bat, Honor View10 packs a solid design with an “all metal” body. The device looks great in hand and feels durable with no squeaking parts. The lack of a new design does make it look like the company is not trying to take a risk and has settled for an approach that has worked for the company so far. 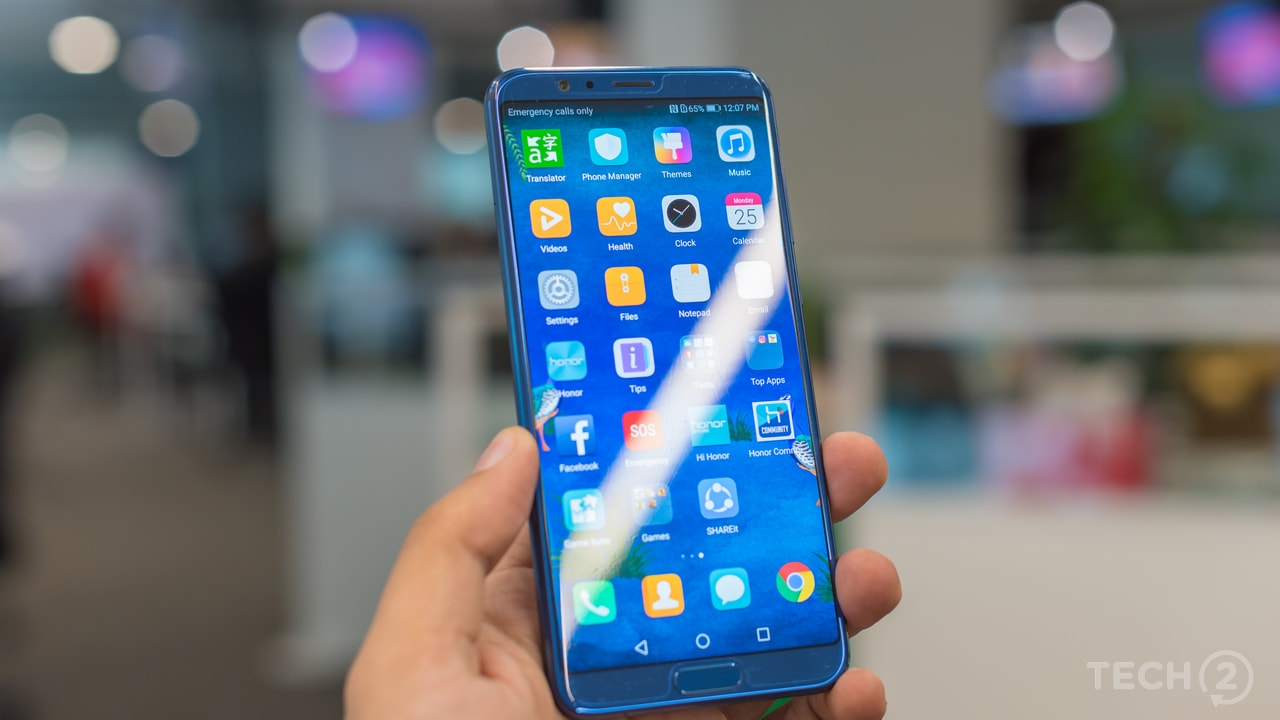 Also, it is not like the company is not making changes to the design of its devices. It is making some small changes but not all changes are for the good. One of the easiest things to note here is that Honor V10 comes with a camera bump on the back of the device which was something unheard of back when the company launched its 8 Pro. The bump on the dual camera setup actually looks like a Minion is staring at you. It is not much different in terms of the design philosophy that Honor follows with its V-series devices. Huawei has updated the design of the device to match the 2017 ‘near bezel-less’ design with comparatively thin bezels and 18:9 aspect ratio. You will find the 13 MP front camera towards the top of the device along with a proximity sensor and the speaker grill. 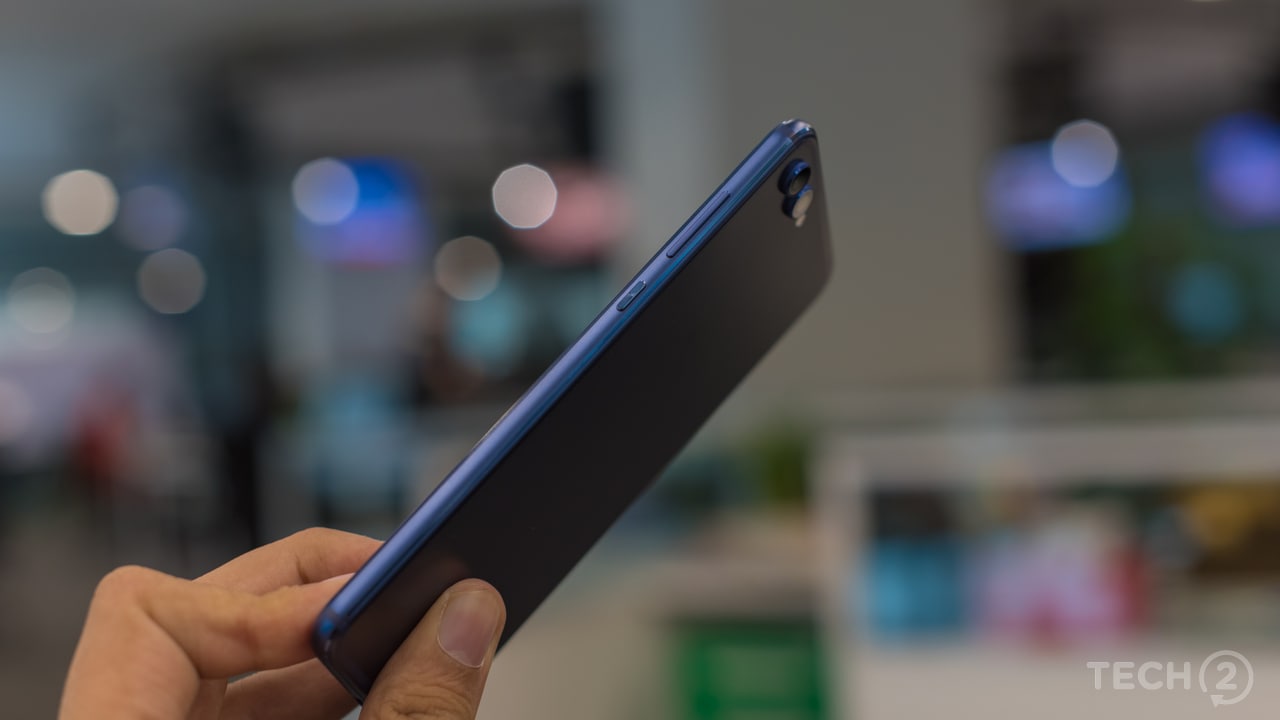 View10 by Huawei features a 5.9-inch FHD+ LTPS IPS LCD ‘FullView’ display panel with 2.5D aluminosilicate glass on the front. The device comes with Hi-silicon Kirin 970 SoC along with an octa-core CPU clocked at up to 2.4 GHz and Mali G72 MP12 GPU to handle graphics-intensive tasks. The phone will come with 6 GB RAM and 128 GB internal storage.

Honor View10 comes with a dual camera setup with a 16 MP sensor with f/1.8 aperture and a 20 MP camera sensor with f/1.8 aperture and phase detection autofocus along with an LED flash unit on the back of the smartphone. View10 comes with a 13 MP camera module with f/2.0 aperture on the front of the device for good selfies. Honor has packed a 3,750 mAh lithium polymer battery with ‘SuperCharge’. The device will come with Android Oreo 8.0-based EMUI 8.0 out of the box along with a number of Honor apps. Huawei has added accelerometer, gyroscope, proximity, compass and fingerprint on the front as sensors to enhance the user experience of the smartphone.

The 5.9-inch FHD+ LTPS IPS LCD ‘FullView’ display panel comes with 403 PPI pixel density along with 2160x1080 resolution and 18:9 aspect ratio. Huawei has added a 2.5D glass on the front of the device to give it a more premium and polished look. The viewing angles on the device are excellent with no problem in colour reproduction. The brightness does take a hit when viewed from extreme angles but that is expected. View10 will come with Hi-silicon Kirin 970 SoC along that packs an octa-core CPU clocked at up to 2.4 GHz and Mali G72 MP12 GPU for gaming and other graphics-intensive tasks that users may throw at it. The Octa-core CPU comes with 4*Cortex A73 clocked at 2.36 GHz and 4*Cortex A53 clocked at 1.8 GHz. 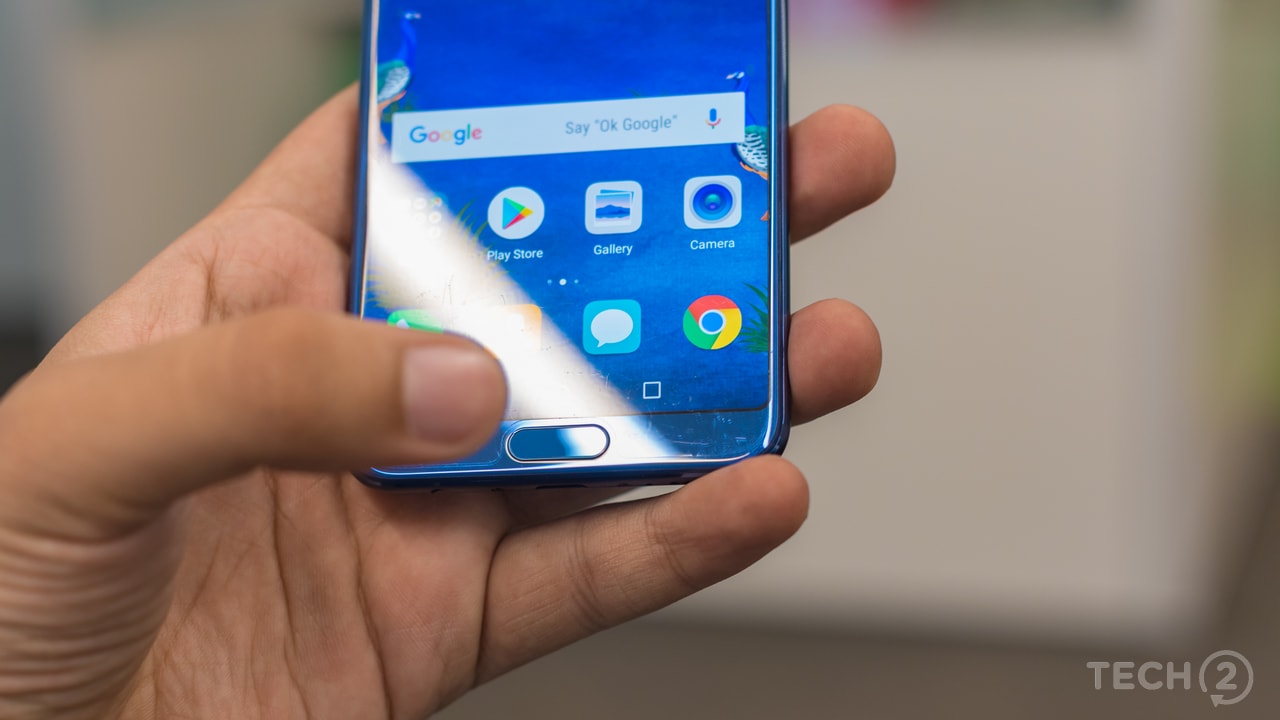 Talking about the Chipset, one of the key feature that Kirin 970 touts is the addition of Neural-network Processing Unit (NPU) for the device to learn from your habits over time. This adds a number of new use cases ranging from intelligent scene detection, image resolution enhancement, intelligent face detection and near-instant translation as part of its camera-powered capabilities. Other improvements include automatic performance optimisation of the device your phone learns about how you use the smartphone.

The company has added that View10 will come in only one variant which sports 6 GB RAM and a massive 128 GB internal storage. Users can also use the second nano-SIM slot to drop in a microSD card to increase the available free storage space by up to 256 GB.

It will be one of the very few devices on the market that will come with Android Oreo 8.0-based EMUI 8.0 out of the box along with a number of Honor apps. The software experience of the device is smooth and I did not encounter any lag while using the device. 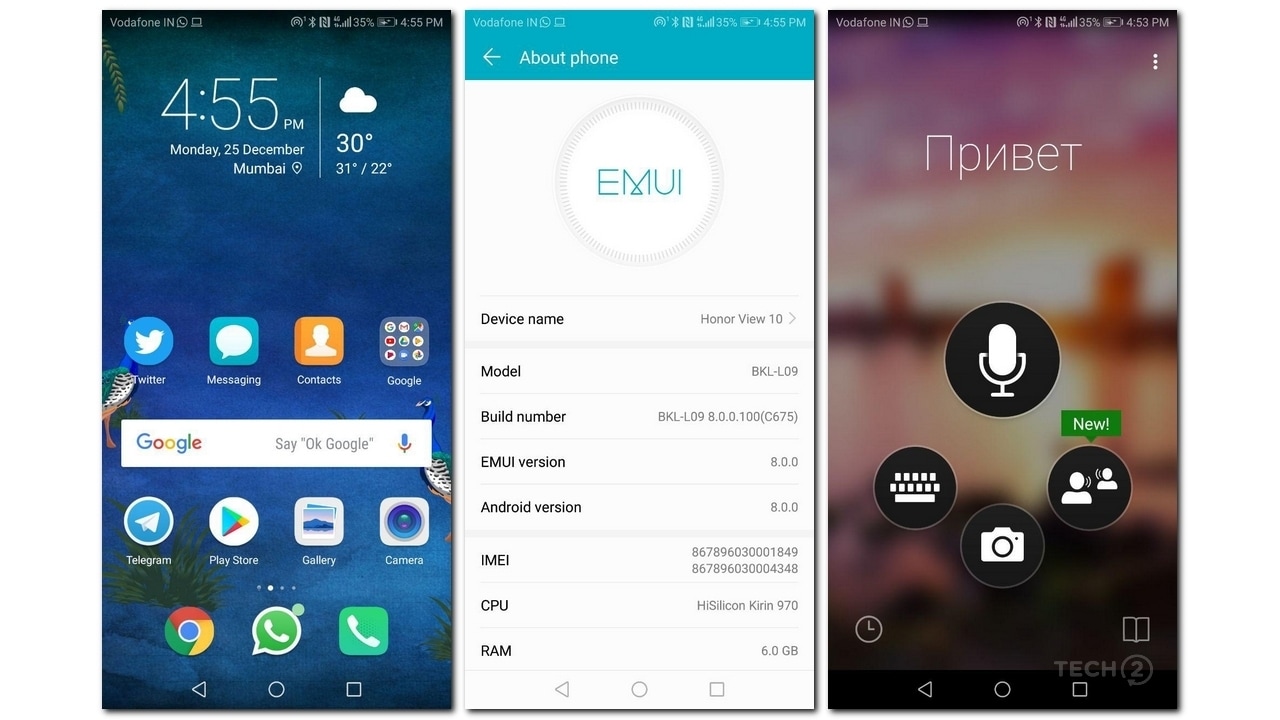 It is no secret that Huawei Honor devices come with a number of apps made by the company. However, this time the company has also packed Microsoft Translator to showcase its AI capabilities at instantly translating about 50 languages. The language translation can work offline as well but you need to download the translation files on your device before you attempt to use them in an offline state. We tried the feature of translating after detecting the text from the image to translate Spanish dialogue into English and it worked without any problem. 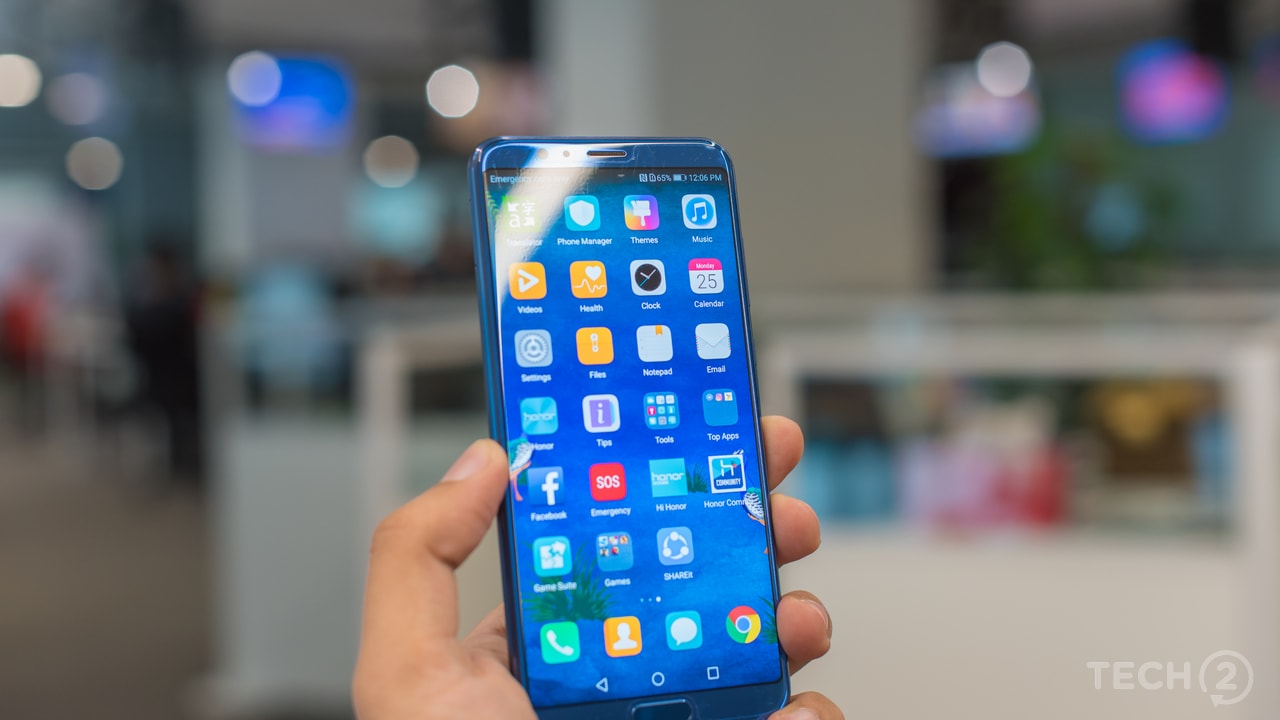 The heavily-skinned interface may not be the cup of tea for everyone but it does offer sufficient functionality for users to not demand a stock flavour of Android.

The dual camera setup in the View10 performs great in good lighting conditions. However, it does have the tendency to overexpose the image in some shots with blown-out details. Images shot in lowly-lit conditions are not up to mark with a lot of muddiness. The camera does manage to throw occasional surprises in low-lit conditions by capturing details and parts of the images that we were not expecting out of the camera considering its overall performance. One thing where the company has to work is the details and textures and the camera does not show much detail in broad day-light. Huawei has issued a statement saying that they will issue a major camera update for the View10 to improve the quality of images. The images from the front camera did not appeal to me as they were heavy on beautifying the selfies out of the box. 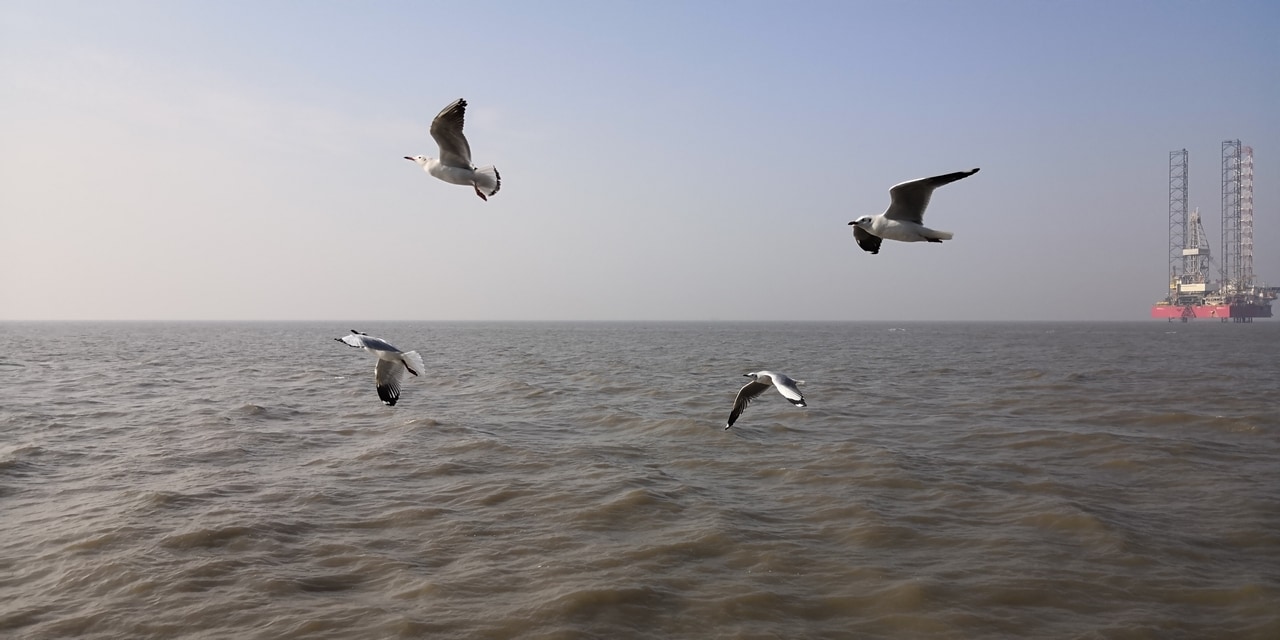 Screenshot from a video shot on Honor Viewo10. The sharpness and quality is really impressive.

Moving away from image quality, the video quality of the videos shot from View10 delighted us beyond measure. The camera does not pack optical image stabilisation but the electronic image stabilisation in the software does manage to do a decent job of stabilising the video. Even though the camera does occasionally hunt for focus while recording video as it cannot maintain focus lock when it is set to infinity but it does manage to go a stellar job while focusing at nearby objects.

Honor View10 packs Type-C USB port, GPS, NFC, Wi-Fi 802.11 a/b/g/n/ac, Infrared port Bluetooth v4.2 with A2DP, LE, and aptX HD support, a 3.5 mm headphone jack and VoLTE-enabled Dual nano-SIM slots for connectivity. The second nano-SIM slot of the two is hybrid in nature where users can put in a microSD card if they are not using the second slot. 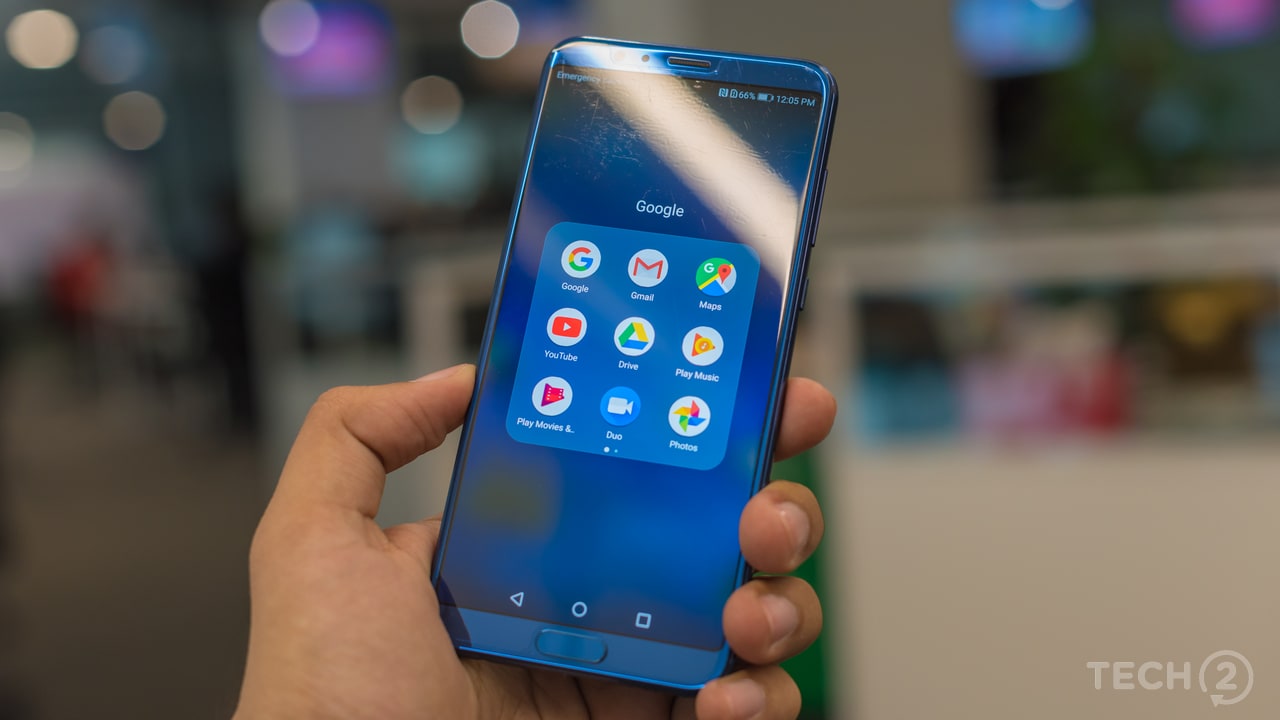 It is interesting to note that the company managed to pack a massive 3,750 mAh lithium polymer battery in a comparatively slim profile. View10 also comes with ‘SuperCharge’ that allows the device to charge from 0 percent battery to 50 percent in 30 minutes.

Huawei seems to have produced an impressive package with the Honor View10. The premium build quality, near bezel-less ‘FullView’ display, the presence of Kirin 970 along with an NPU and all the AI-powered software experiences do make me believe that it will give stiff competition to its rivals. 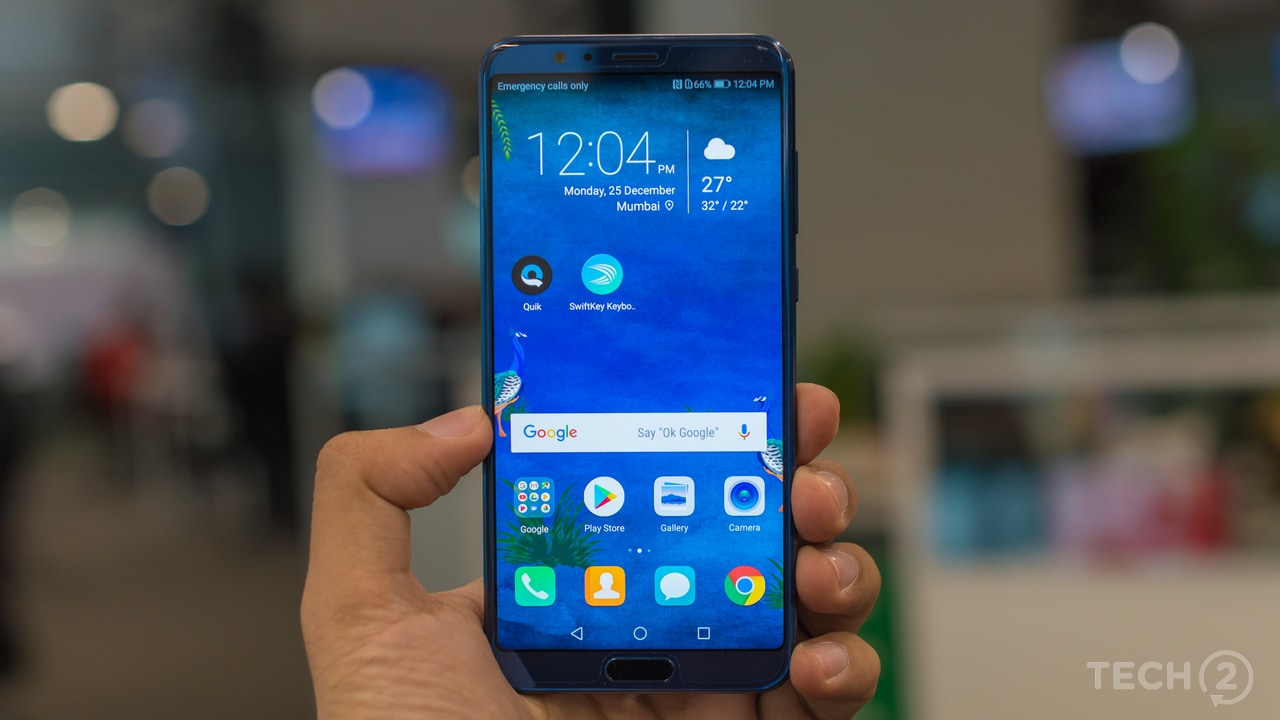 Apart from giving tough competition, it is likely that Huawei Honor will push true AI-powered experiences to mid-range devices and bring the power of AI to the masses.

It is similar to what Honor 8 Pro did with the dual camera setup where it brought the dual-camera setup to the mid-range, forcing other companies like Moto and Xiaomi to push it to the almost entry-level devices.

However, we still need to test and put the device through its paces to formulate a concrete verdict on the device.