Taiwanese smartphone brand HTC has introduced its latest device, the HTC U11 EYEs in Taiwan with a dual-front camera setup and Face Unlocking capabilities. This comes months after the company updated their 2017 flagship smartphone, the HTC U11 back in November with the launch of the U11 Plus. 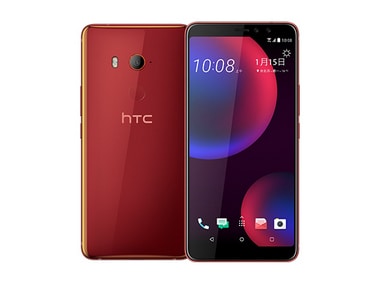 Just as the flagship HTC U11 Plus, the U11 EYEs features a tall 6-inch display FHD+ Super LCD 3 display with 18:9 aspect ratio, 2160 x 1080p resolution and a pixel density of 402 PPI. The company has also added Corning's Gorilla Glass 3 on the display to protect it from scratches and other damage. It is made out of metal and glass and looks similar to the flagship U11 Plus.

The U11 EYEs sports 4GB of RAM and 64GB of storage which is expandable up to 2TB. As listed on the company's Taiwanese website, the smartphone has been priced at NT$14,900 which is approximately Rs 32,000.

Inside, the smartphone features a 64-bit Qualcomm Snapdragon 652 SoC with octa-core processor which is a step down from the Snapdragon 835 SoC used on the flagship. This is because HTC is aiming at the mid-premium device segment with the launch of the phone. U11 EYEs also features a hybrid dual-SIM slot allowing users to choose between a microSD card expansion or a second SIM. The device also brings back Edge Sense with a pressure-sensitive frame that allows squeeze gestures which we first saw on the HTC U11

On the camera front, HTC U11 Plus features a 12-megapixel UltraPixel 3 camera with a f/1.7 aperture, located on the back of the smartphone. The camera here is capable of Ultraspeed Autofocus and has Optical Image Stabilisation as well. In terms of video, the camera is capable of shooting full-HD slow-motion video at 120 FPS along with 4K video recording. The front of the device features a dual-front facing camera setup. Both the sensors sport 5 MP resolution along with f/2.2 aperture.

HTC has also added Face Unlock feature, something that most companies are packing with their latest offerings. The phone is IP67 compliant and has Bluetooth 4.2, Wi-Fi 802.11 a/b/g/n/ac and USB-C port instead of a USB 2.0.

U11 EYEs comes with a massive 3,930 battery that supports Qualcomm's Quick Charge 3.0 technology. The phone will be available three colours, namely, Red, Silver, Blue and Black and in the meantime, HTC has not issued any details about the availability of the device in the Indian market.

The HTC U11 gets an update that enables 60 fps full HD video recording and Bluetooth 5.0

HTC U11 smartphone review: A sensible, everyday flagship with a great camera

HTC U 11 teased, to come with a brand new '360 real-life recording' feature

HTC U11 unveiled, features a Snapdragon 835, up to 6 GB RAM and Edge Sense technology