Huawei is clearly trying to catch on the notch-frenzy ahead of rivals Xiaomi and HMD Global's Nokia.

Huawei launched a bunch of budget-oriented smartphones at the end of 2017 and the beginning of 2018. We saw the Honor 9i, Honor 7X and the Honor 9 Lite being launched in quick succession before the company shifted focus to the more premium Honor 10.

The focus now seems to be back on the budget segment as Huawei's latest addition, the Honor 9N has just been launched at the price of Rs 11,999 for the base variant with 3 GB RAM and 32 GB storage. The phone will be sold in two other variants as well, one with 4 GB RAM and 64 GB storage (priced at Rs 13,999) and another with 4 GB RAM but 128 GB of storage (priced at Rs 17,999). While that is similar to the price of the Honor 9 Lite which currently sells for Rs 14,999, Honor is introducing in a notch on the 9N which not very many smartphone makers can boast of at this price. 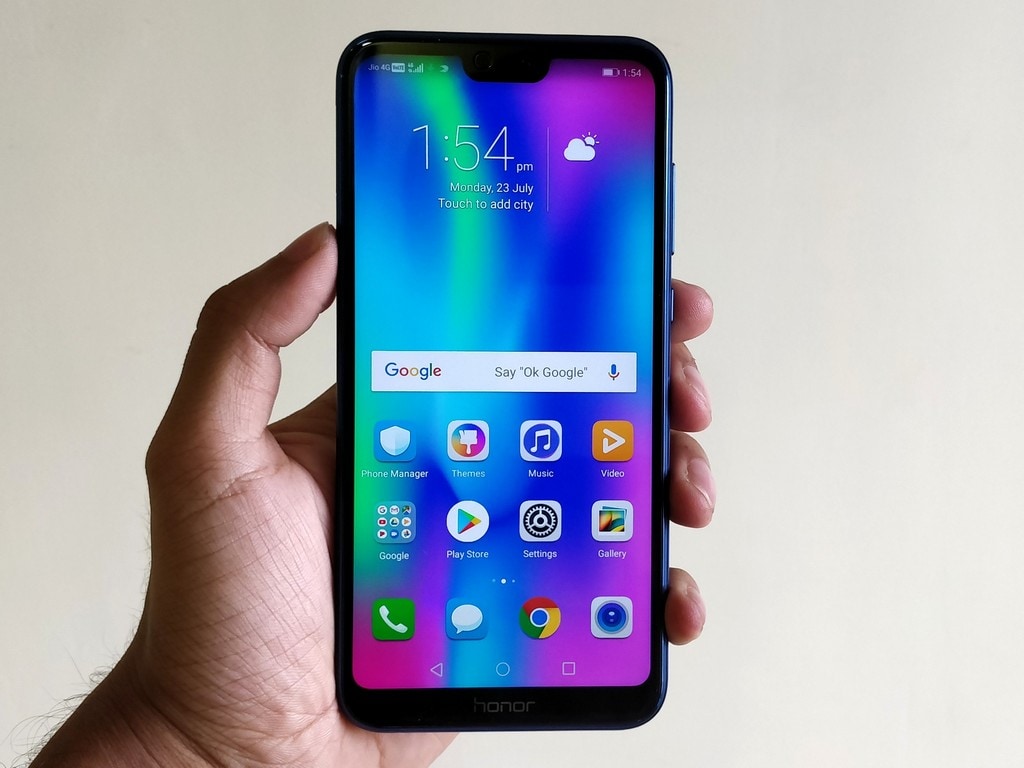 But does pack enough to warrant its price or is it just another pretty looking Honor smartphone which falls below expectations when compared to the likes of the Xiaomi Redmi Note 5 Pro? Let's find out.

If you've seen the Honor 9 Lite or the Huawei P20 Lite, you'll realise that the Honor 9N looks almost identical, barring the notch of course. The phone is compact and feels well built, which is usually the case with Honor smartphones and also manages to feel premium.

Huawei loves using glass on their smartphones and the 9N has 2.5D glass on the front as well as on the back. On the front you have a tiny bezel on the top followed by the notch which lies right below it and on the bottom, you get a chin which features the Honor branding. The frame is also very sturdy despite being made of plastic, making the entire package very pleasing to look at. The back of the Honor 9N sports a glossy glass finish which gives it a premium look. Image: tech2/Shomik Sen Bhattacharjee

Turn the phone around and you see the 9N look exactly like the Honor 9 Lite. The primary dual-camera setup is housed at the top left corner, while the fingerprint scanner is placed in the middle. The camera module has a minimal bump and comes with an LED flash housed right next to it.

The button placement is also quite standard, with the volume rocker placed on the right side of the phone and the power button placed below it, while on the left we have the dual SIM tray. The bottom houses a micro USB port for charging and a 3.5 mm headphone jack followed by the speaker grille. The Honor 9N is also quite slim and grippy. Image: tech2/Shomik Sen Bhattacharjee

The unit we have with us for review is the blue variant and did pick up a lot of dust and fingerprints every time I held it. So you certainly do have to clean the Honor 9N a lot if you want the glossy design appeal to remain.

You get a 5.83-inch, 19:9 aspect ratio display with a resolution of 1080 x 2280 pixels, which gives a pixel density of 433 PPI. The display uses an LCD panel so it is quite easy to view and there's no noticeable colour shift. The display is an LCD panel which is adequately punchy and gets quite bright. Image: tech2/Shomik Sen Bhattacharjee

In my short time with the phone, I did not encounter any issues with the display and found it to be quite pleasing to use. It also gets quite bright so viewing it in outdoor conditions is not really an issue. Huawei hasn't moved on to USB-C yet, even though its mid-2018. Image: tech2/Shomik Sen Bhattacharjee

Our review unit comes with 4 GB RAM and 64 GB storage, out of which around 52.4 GB is usable. There is a 3 GB RAM and 32 GB storage version of the same available as well.

Just like the Honor 9 Lite, the Honor 9N comes with Android Oreo 8.0 out of the box. Of course, the Android OS gets a skinning treatment and comes with Huawei’s Emotion UI version 8.0.

Now, this is a lighter version of the skin and not the full version that we've seen on the Honor 10. Huawei does seem to have fallen behind a little bit here since most smartphones that are being launched now are mostly being shipped with Android Oreo 8.1. There's not a lot new here at first glance. The software is still very clearly Huawei's weak spot as even with my minimal use, I did notice the occasional stutter in animations. I am yet to put the 9N through its paces, but as far as initial impressions are concerned, there's nothing on the table with the smartphone.

The Honor 9N sports a dual-camera setup on the back, on which is almost similar to that on the Honor 9 Lite. You, therefore, get a 13 MP f/2.2 aperture primary lens along with a 2 MP sensor meant for capturing depth information. On the front there a single 16 MP f/2.0 lens for selfies.

The camera interface is simple and intuitive. It comes equipped with a bokeh (aperture) mode for both the front and rear facing cameras and also features a "motion photo" feature which essentially turns your image into a gif by capturing a few seconds before and after the image is captured. Swiping right once you open the camera app, brings up multiple modes such as Pro Photo, HDR, Panorama, Light painting among others. Swiping left brings up the settings menu. Huawei has chosen to go for a single 16 MP front-facing camera on the Honor 9N. Image: tech2/Shomik Sen Bhattacharjee

The Honor 9N is also able to shoot FullHD video at 30 fps through both front and rear cameras. As far as initial impressions go, the phone managed to do quite well with images shot in bright conditions. This applies to the single front-facing camera as well.

The Honor 9 Lite comes with a 3,000 mAh Li-Polymer battery which is non-removable. It supports Super Charge technology, which is Huawei’s fast-charging tech. But it comes with a micro USB 2.0 charging and data transfer port.

It is a little sad that Huawei still feels that a micro USB port in mid-2018 is the way to go, but that surely isn't a deal-breaker for most people interested in buying this phone.

With the price tag starting at Rs 11,999, Huawei is clearly trying to catch on the notch-frenzy ahead of rivals Xiaomi and HMD Global's Nokia. It has been a while since notches became a thing on Android smartphones, but very few companies have brought it to budget-oriented smartphones so far.

However, it feels like a tough ask from buyers to prefer the Honor 9N just because of the notch. The Kirin 659 chip inside the 9N is also beginning to age in comparison to Qualcomm powered chips being offered in the same price range.

In addition to this, Huawei (and not Honor) is also expected to launch two more smartphones, the Nova 3 and the Nova 3i in India later this week, which is again expected to be quite similar to the Honor 9N. So it does seem uncertain what exactly Huawei is attempting to do right now, apart from bombarding users with smartphones.

We will have to put the Honor 9N through its paces to find out whether it is a better performer than the Honor 9 Lite and the Huawei P20 Lite which both come with the same processor.

Honor 9N Review: Notched display on a budget, but fails to match up to competition