Honor 10 comparison: Honor's newest flagship goes up against its very own View 10, Samsung Galaxy A8 Plus, Nokia 8 and the Xiaomi Mi Mix 2

With the OnePlus 6 launching later today, the Honor 10 could face stiff competition if the flagship smartphone is launched at a price around Rs 35,000.

Huawei's online-only sub-brand Honor has just launched the Honor 10 in India amongst a number of countries at a price of Rs 32,999 for a variant with 6 GB RAM and 128 GB storage. 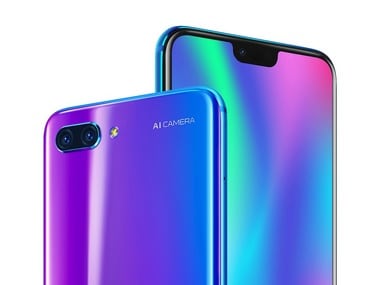 Considering what Honor packs into the smartphone and at a price tag of under Rs 35,000, the Honor 10 can be pitted directly against a number of offerings from major competitors, including Samsung, Xiaomi, Nokia and even one from its own stable.

Glancing through what the Honor 10 packs in terms of hardware, it gets a 5.84-inch FHD+ LCD display with a tall 19:9 aspect ratio with a notch that resembles the one we saw on the Huawei P20 Pro. What will surely grab a lot of eyeballs is the premium and distinct Aurora Glass design that we see on the Honor 10. It also sports the Kirin 970 chipset inside followed by a dual camera setup which comes with a number of AI chops added to ensure you get stellar images. Sporting Huawei's flagship chipset and a stellar dual-camera combo on paper, the Honor 10 has a number of mid-premium and also a few flagship smartphones in its crosshairs. We picked out the Nokia 8, the Samsung Galaxy A8 Plus, the Xiaomi Mi Mix 2 and Honor's previous flagship the View 10, considering they are all similarly priced, in a segment that used to be dominated by OnePlus.

With the OnePlus 6 launching later today, the Honor 10 could face stiff competition if OnePlus does decide to launch their flagship at a price under Rs 35,000. However, if leaks and rumours are anything to go by, the OnePlus 6 is expected to be priced higher than what it is generally launched at.

Do bear in mind that we are still in the process of testing the Honor 10 and that this is solely a showdown in terms of claimed specifications. For a more thorough comparison do watch out for the in-depth review which will be out soon.