Google I/O 2018: An upcoming Google Maps will let you navigate the world with just your camera

Google will collate data from Street View, your location and the phone's compass to give you a visual indicator of where to go in the updated Google Maps. 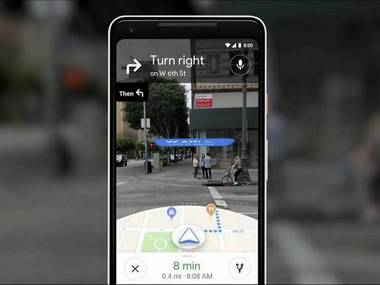 To use the new Visual Positioning System (VPS), you simply fire up the camera in Google Maps and look around. Google will collate data from Street View, your location and the phone's compass to give you a visual indicator of where to go. You point your camera at an intersection and you'll see a virtual arrow pointing you to the right path. Better yet, animated guides (like a fox, a dog or anything else you can imagine), can also lead you to your destination.

Better yet, while in VPS mode, you'll get additional information on the buildings and landmarks around you.

Google Lens was announced as a separate app during Google I/O 2017. Google Lens can identify buildings, objects and more if the camera is pointed at something. The app uses artificial intelligence to recognise images of similar objects and then provide more information to the user.

Google has also made Maps more personalised for users. The updated Maps app will recommend places, including restaurants and events, based on the user's history and interests. A new 'For You' tab will show personalised recommendations as well. The company also launched Android P and other new features for Google apps on the first day of 2018 Google I/O.