Google begins rolling out a new two-wheeler mode on Maps; roll-out restricted to Indian users as of now

In what seems like an India-first feature, Google has started rolling out a 'two-wheeler mode' as a separate mode of transport in Google Maps for Android.

Google Maps has been known to add features and design tweaks that are directed toward improving the way people navigate in and around towns, cities and even other planets. The newest addition, however, might be the perfect addition to users who have been wishing for a dedicated two-wheeler mode in Maps. 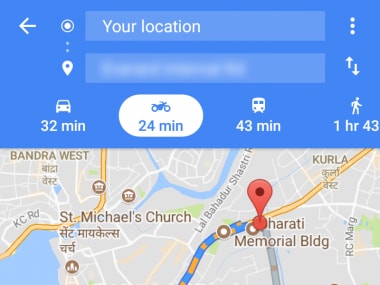 In what seems like an India-first feature, Google has started rolling out a 'two-wheeler mode' as a separate mode of transport in Google Maps. The mode depicted by a motorcycle icon is seen between the vehicle and train icons which were previously seen alongside each other.

According to a report by Android Police, the feature has been expected to feature for a while now after several APK teardowns revealed the presence of a 'START_SCREEN_TWO_WHEELER_OPT_IN_DETAILS' coded inside the installation file.

At the time of writing this report, we have noticed that the rollout of the update is gradual and may not show up on all devices, even if the devices are running the same version (v9.67.1) of Google Maps. The rollout also seems to be restricted to Android devices only for the time being. The roll-out can be noticed on certain Android devices running v9.67.1 of Google Maps.

As revealed by in the screenshots, the estimated time of arrival which is computed by Google through its servers is considerably lower when the 'two-wheeler' option is selected. This is so because of two-wheelers being able to take narrowers roads which might not accessible by four-wheelers.

Everything else including the steps breakdown and the navigation itself is unchanged. The rollout has been reported in India only so far but might branch out to other parts of the world soon.

Google updated Maps in mid-November with a number of key additions and design tweaks. As part of the update, Google Maps shows new updates happening around a user including the closing of a road, opening and closing time of a business and local events.