Facebook has allowed users to upload 360 degree photos on their news feed but now it will allow you to directly capture 360 photos using its camera app.

Facebook is planning on bringing in a new feature which would allow users to capture 360 degree photos, rather than just uploading them. The feature will be available both on Android and iOS from 23 August, which will remove the requirement for a third party app for 360 degree photos. 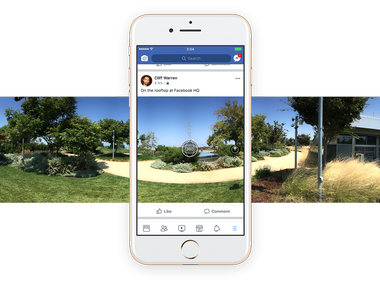 It's been a year since Facebook has allowed users to upload 360 degree photos and videos on their news feed, but this is the first time that Facebook will allow you to directly capture using its camera app. The photo can also be set as the cover photo.

The process is similar to the one while capturing a panorama image on your smartphone's regular camera. A new 360 Photo option will be available at the top of the news feed in the Facebook app. Press this and then slowly turn around 360 degrees. The graphic should always be centered during the whole process. After capturing the photo just pick the starting point for the image and publish it. The 360 degree update is currently limited only to photos. For capturing a 360 degree video, a separate device such as the GoPro 360, Insta360 or the Nikon KeyMission 360 will be needed.

In other Facebook news, the social media giant introduced an option where advertisers can buy video ads to meet the target audience.