The Dyson Pure Hot and Cool Link works as a fan, a heater and an air purifier.

Late last year, Dyson brought the second generation of its air purifiers in India — Pure Cool — which had improved sensors over its predecessor, unibody design for efficiency, an LCD display, among other things. The air purifier also used the ‘air multiplier technology’, which helped the device double up as a fan.

This year, Dyson released a variant of this model, called the Pure Hot and Cool Link, which functions as an air purifier, a fan and somewhat a heater.

I have had the Pure Hot and Cool Link with me for a few weeks in Delhi now, and so I was able to use it through the descending winters over here, making use of both the hot and cool feature. 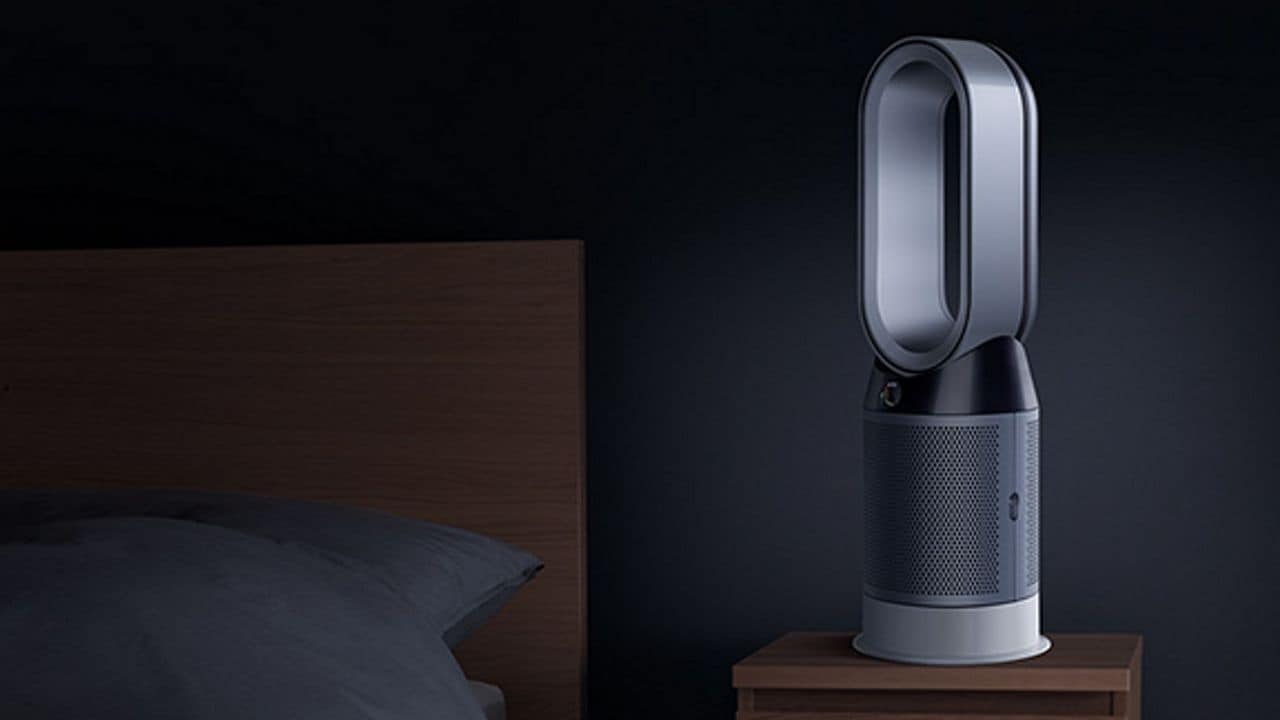 Design-wise the Pure Hot and Cool Link looks pretty much the same as the Pure Cool, except this one’s smaller, and it can be tilted from around its base, which is slick! That little tilt essentially lets you direct the air at a particular angle, which is pretty useful.

This model too comes with a display, giving you real-time updates of the air around you, and the temperature you run the device on.

I should also mention one of my personal favourites with the design of the air purifier, which is the remote that it comes with it. The Dyson Pure Hot and Cool Link comes with the cutest little remote, with buttons that are basically carved into the remote’s body, they don't bulge out from the rest of the surface. It’s the same as its predecessor’s beside the added functionality to switch between hot and cool air (that I will discuss in detail ahead). Also, a very important aspect of the design is the magnetised top of the remote, which is also curved in a little bit, allowing it to sit comfortably on top of the unit without falling off. I found that to be a genius idea.

(Also read: Dyson Airwrap review: A premium hair-styling gadget that will tempt you to spend a bagful)

This little machine does so much

The Dyson Pure Hot and Cool Link is feature-rich for sure. Its glass-HEPA filter apparently filters 99.95 percent of particulates, including PM2.5, PM10, down to PM0.1.

It comes with an Auto Mode, which essentially automatically adjusts the intensity of the purification, judging by the air quality around it. So, if you are too lazy to customise it, the auto mode can be your best friend.

There is also a Night mode, which basically lowers the fan speeds thereby reducing the noise and turns off the LCD. So that the noise or the light doesn’t wake you up at night.

There are also multiple fan modes. Unlike the previous model which had 7-speed settings for the fan, this one has 10. The first six settings pretty much run the machine without any noticeable noise, with only the last four which remind you that there is an air purifier switched on in the room. You can adjust the speed, and even make the loop oscillate up to 350 degrees, and shift the air it throws out to the back vent or the ones on the sides.

The remote has dedicated buttons for a diffused or a focused mode, which lets you decide how you would want the air to flow around the room. The diffuse mode will spread the air in all directions, and the focused mode will throw air from the front, and you can point it in one direction, tilt it to an angle, or make it oscillate.

Now, before we get deeper into this, you have to know that the Dyson Pure Cool or this Hot and Cool variant, can’t actually throw cold air per se. It does the job of a fan and circulates (and purifies) the air around you. So that’s the Cool part. For the Hot bit, it uses a built-in heater, which can be used at a maximum temperature of 37-degree Celsius.

It doesn’t exactly work like a heater, but it basically conditions the air around you according to the temperature you set, and it does it a little slow. When the winters were receding here in Delhi, but it was still not warm enough for fans or ACs, I would set the Hot and Cool Link at 26 degrees. 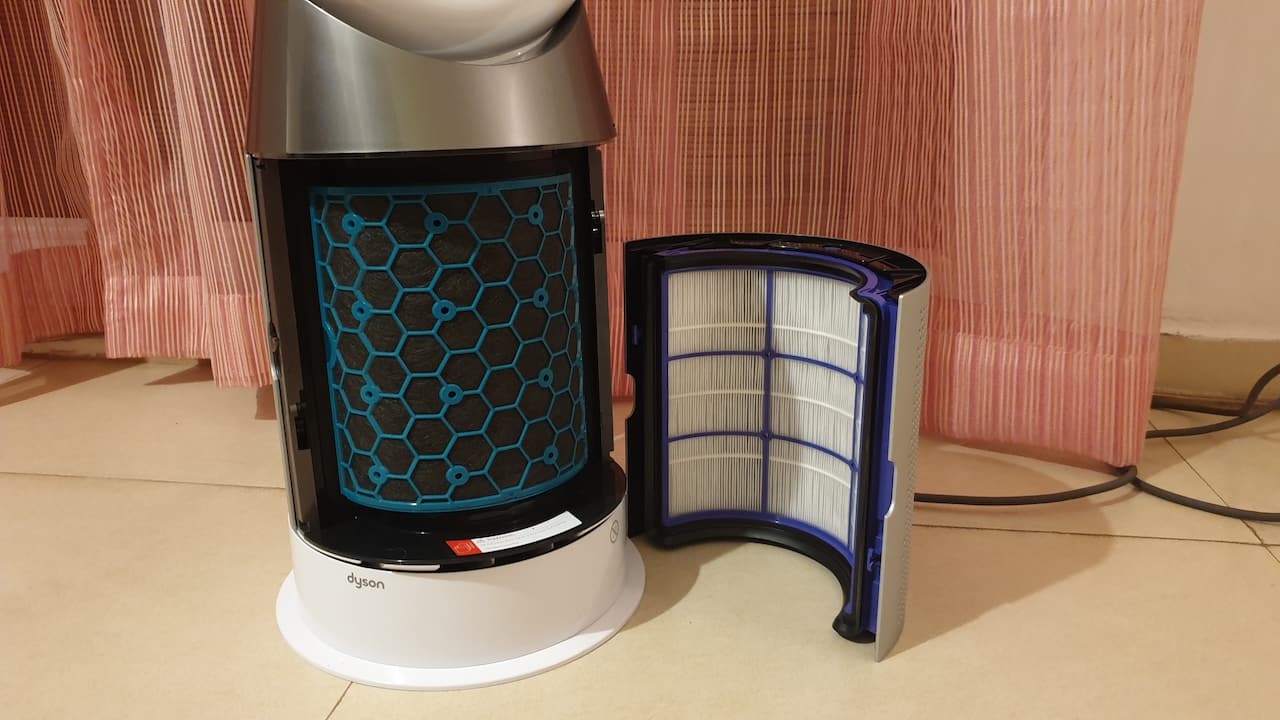 If you sit right next to it, that warm-ish air instantly makes you comfortable, but for the entire room’s temperature to go up a little would take around an hour. Again, you can’t see this device as a replacement for a heater.

However, I personally am not very fond of heaters because they make me feel dehydrated and sometimes nauseous too. With the Hot and Cool, though, the circulating air prevents you from feeling suffocated. Meanwhile, it also cleans the air around you, which is such an important thing for Delhi winters at least.

Also, the device eliminates the need for you to get a heater and an air purifier during winters. If you are using it in summers, you could use it as a portable fan that also cleans the air around it.

I would want to point out though that while the air purifying capabilities of the Hot and Cool matches that of its predecessor — meaning, in a 450 square foot room, in normal conditions, it was able to bring down and maintain the AQI (air quality index) reading down from 77 to 20 in about 45 minutes to an hour. However, cooling and hot air functionality doesn’t do too well in larger rooms.

For once, you could still run the device on maximum heat and in about an hour you could sense the temperature of the room rise, but the cooling feature works best if you use it as a portable fan, and place it somewhere around you.

My take on the device

Dyson’s Pure Hot and Cool Link is a smart purifying fan and heater. If you just look at it as a fan, there are multiple, much cheaper options available out there. However, what makes this unit stand apart is that it is an air purifier, which also acts as a fan, with a bladeless design, which makes it chic looking and also safer around children. It’s also quiet.

As a heater, I find it to be more efficient than comparable heaters primarily because it maintains the humidity around you. And I’d give a thumbs up to that.

As a purifier, it cleans air down to 1 micron and uses activated charcoal/HEPA filters. The cost of maintaining the filter is not too steep. In the Delhi air, you would probably need to change the filter once in 7-8 months. In case you live in a city that isn't as polluted, you would not need to change the HEPA for a year at least. The Dyson Glass HEPA filter can be purchased off Amazon India or you can go to the offline Dyson Stores (only Delhi and Bengaluru, for now). The filter costs Rs 2,490. 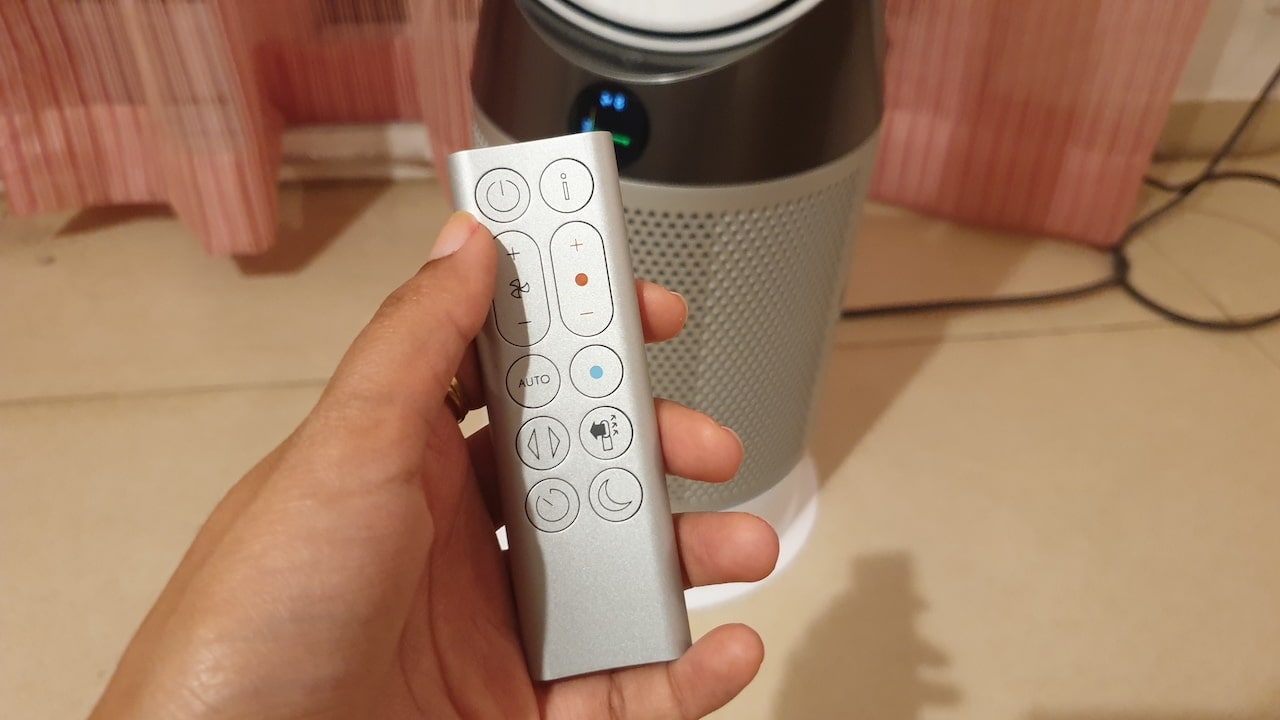 Another important aspect of owning an air purifier, which is also a fan, is its maintenance. For the lazy being that I am, the Dyson Hot and Cool Link is meant for me when it comes to its demands for being cleaned, at least.

I have a dog in the house. She is a golden retriever and sheds enough daily to make another one of her from that fur. But I was delighted to see, that despite all that hair, and the obvious dust that comes in with our shoes, the filter was squeaky clean. And that's no magic, but the engineering of the mesh cover outside does not let big particles like the hair to get in. They just stick outside the mesh and you can dust them off.

Well, like I mentioned if you see it as just a fan or just an air purifier, there are many cheaper options out there. But when you combine all its functions of working like a fan, a heater, an air purifier – the whole is greater than the sum of its parts – it becomes a unique device and is fit for purpose. And you can use it through summers and winters!

Dyson Airwrap: A premium hair styling gadget that will tempt you to spend a bagful

Xiaomi Mi Air Purifier 2: Its usefulness depends on you and your concern for your family

Xiaomi Mi Air Purifier 2 to be launched in India today