Dyson Pure Cool air purifier review: Soothing for your lungs but harsh on your pocket

I spent a few weeks with the Dyson Pure Cool, and I think my lungs are especially happy!

The last three years in Delhi have seen some of the most polluted days in terms of air quality. The orange dusty clouds have become as regular as the Delhi winters. There have been times when I have wanted to run out of the city every time, but that's not very practical, is it? Because running away needs money and money comes from a job, and the job is here in Delhi. So the only solution I was left with was to rely on an air purifier.

But to be honest, despite the complaints, for the longest time I felt reluctant in investing in an air purifier. Either because they are very tricky to buy (is it really effective?) and very hard on the pocket (is it worth the money?)

And amid all of the dilemma, Dyson launched their Pure Cool air purifier in India in July and sent me a unit of the tower model to review. It costs Rs 43,900 in India. There is also a desk variant of the air purifier, which is priced at Rs 36,900. I reviewed only the tower variant, and here’s how my last few weeks were breathing the Delhi air. 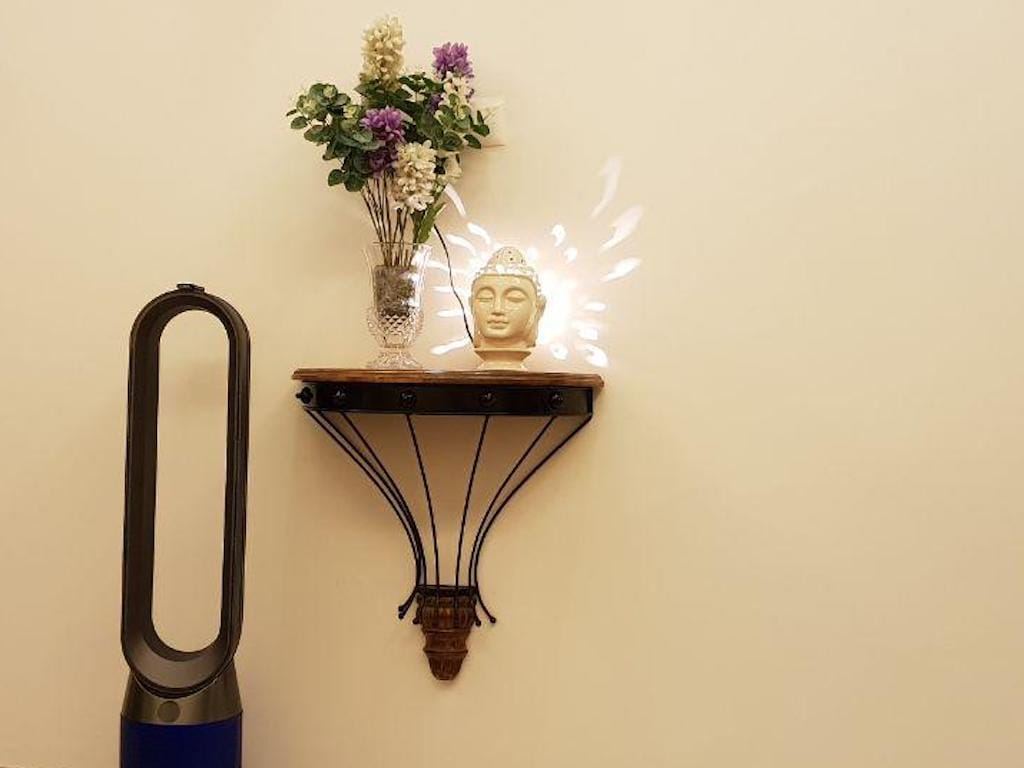 It looks gorgeous, for sure. The Dyson Pure Cool looks chic and fits in with your home decor very well. It comes in a blue and a white colour variant and smartly sits in a corner doing its job. Ten on ten for looks, really.

It has a cylindrical base with a mesh, through which air is brought in, after which it's driven through the loop-like structure above, and pushed out after being purified. For the ones who don't know, this Pure Cool is the second generation model in the series. And as opposed to the first generation model, which had a separate base and top earlier, the new air purifier comes in a unibody design, so that loss of energy is minimised and the efficiency of the air purification process is increased.

Dyson uses what it calls air multiplier technology, which creates a low-pressure zone inside the elliptical ring on the top of the air purifier, which pulls in air from behind it to create a much faster, directed "beam" of air. This makes the Dyson Pure Cool both an air purifier and also a fan. 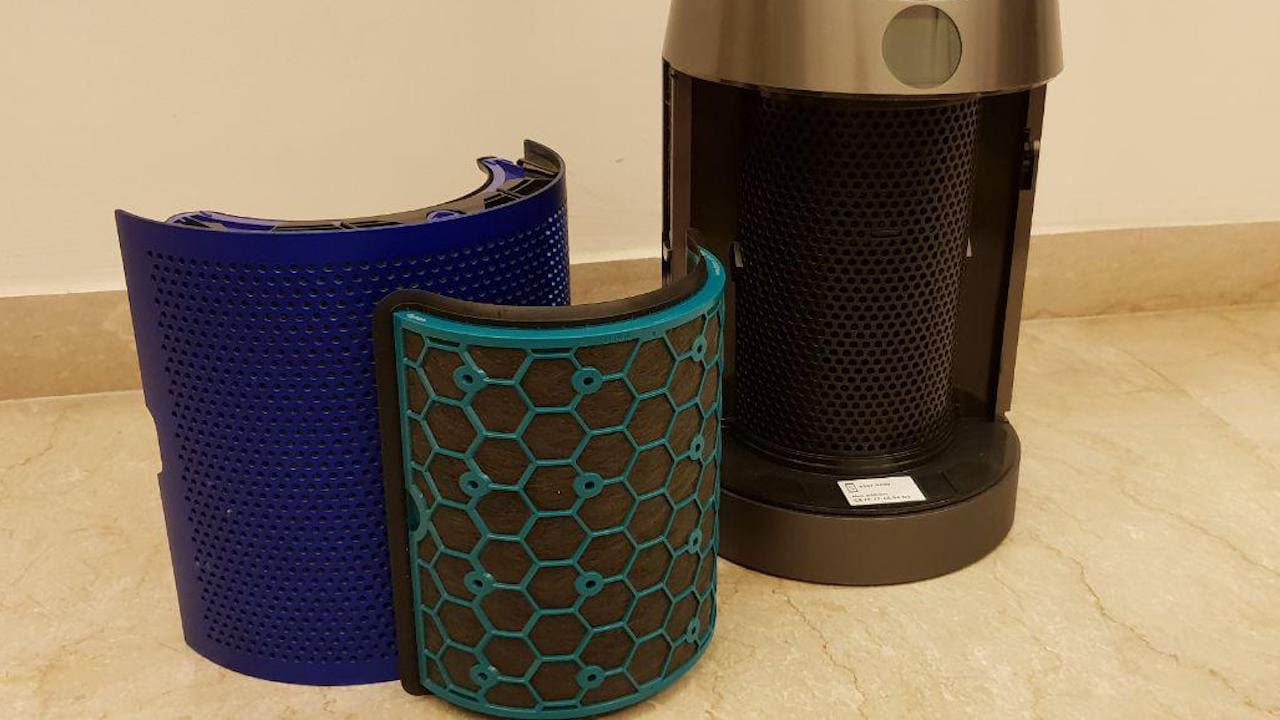 The separate HEPA and carbon filter of the device.

Also different from the first generation in terms of design, are the filters in the air purifier. Earlier, under the mesh sat a thick layer of the filter, which included both a carbon and HEPA mesh to filter the air. The new filter design separates the two layers, for longer life.

The second generation air purifier also comes with a display, giving you real-time updates of the air around. I should also mention one of my personal favourites in the design of the air purifier, which is the remote that comes with it. The Dyson Pure Cool comes with the cutest little remote, with buttons that are basically carved into the remote’s body, they don't bulge out from the rest of the surface. 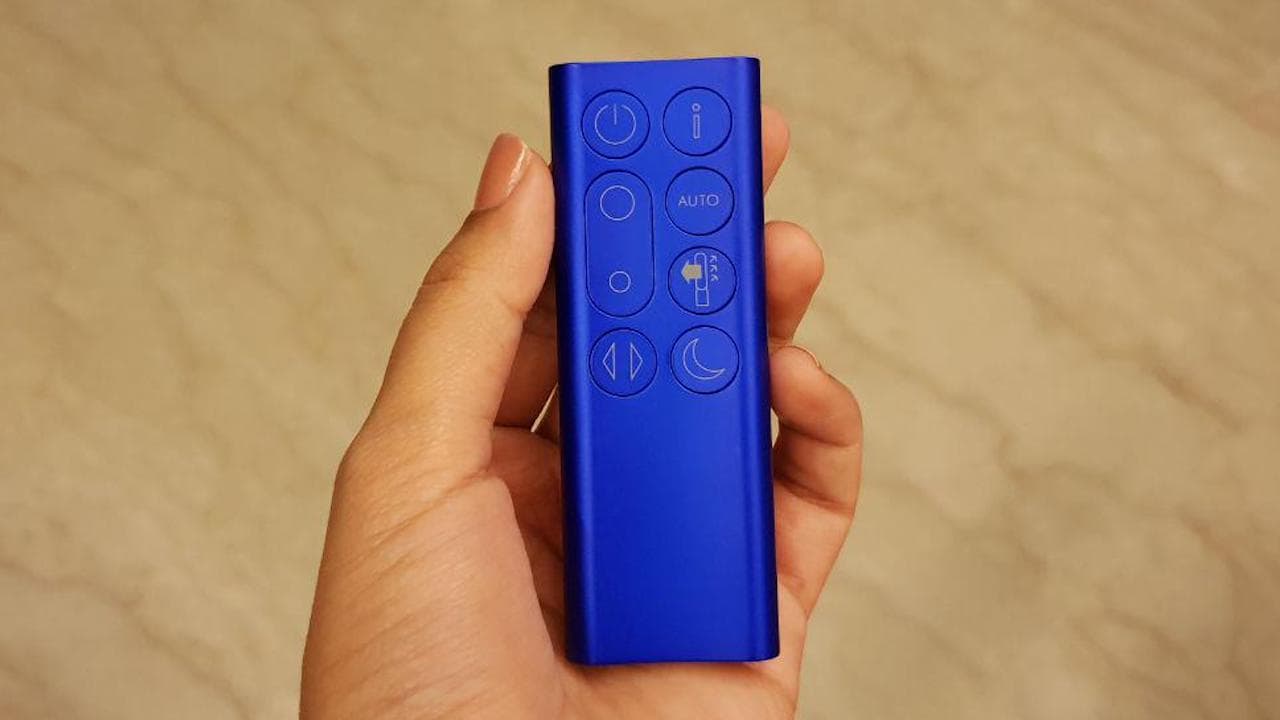 The remote for the air purifier.

But the problem with cute little remotes is that you can misplace them very easily, and so Dyson has given this one a magnetised top and a slight curve that lets it sit comfortably on top of the unit without falling off. I thought that was genius! The remote clicks and sticks to the top of the air purifier's body perfectly.

Along with the Pure Cool, Dyson has also made a bunch of changes to the companion app of the air purifier. With the app installed on your phone, you can now basically use your smartphone as the remote. But the advantage of the app over the remote is that you can control your purifier even when you are away from home.

I found the app pretty swift and simple to use. It lets you customise a schedule for the purifier, when you want it on, the days you want it to run all day, and the days you do not want to run it at all. Screenshots of the Dyson Link App. From left to right: The virtual remote, the real-time update of the air in your house, customisable schedules for the air purifier.

One interesting detail I noticed with the customisable schedules of the purifier was that it will always switch on and remain that way unless instructed to switch off using the scheduler.

Having set the purifier to run from 6.00 am to 10.00 am on some days, automatically, I once failed to mention it to my mother that I was testing a feature. When she saw that my dog was freaking out when the purifier switched on by itself, she switched it off with the remote. This was around 8.00 am. To my surprise, thanks to the schedule fed in using the app, about 10 min later, the purifier went back on, and tirelessly ran till 10.00 am. It's adamant on purification.

The Dyson Pure Cool is feature-rich for sure. Its glass-HEPA filter apparently filters 99.95 percent of particulates, including PM2.5, PM10, down to PM0.1.

Then the purifier comes with an Auto Mode, which essentially automatically adjusts the intensity of the purification, judging by the air quality around it. So, if you are too lazy to customise it, the auto mode can be your best friend.

I also found the Night mode to be quite useful. When I sleep at night, even a tiny bit of light bothers me. I was very happy when I noticed the Night mode on the Dyson link which basically lowers the fan speeds thereby reducing the noise and turns off the LCD.

There are also the multiple fan modes. Unlike most air purifiers, the Dyson Pure Cool Link doesn't just blow air out, it spreads the air across the room and doubles it up like a fan. There are 7 speeds to the fan. The first six speeds are pretty much noiseless, with only the last one that actually makes you feel that there is an air purifier working in the room. You can adjust the speed, and even make the loop oscillate up to 350 degrees, and shift the air it throws out to the back vent or the ones on the sides.

Before I get down to this part, here's a tiny anecdote. When the Dyson Pure Cool came home, the first thing my father said was, “This looks too fantastic to work in the cruel Delhi air, how good is it?”

I spent a couple of weeks with the air purifier and even when I was at work, in the 5-6 hours that I set it to run every day, in normal conditions, it was able to bring down and maintain the AQI (air quality index) reading at down from 77 to 20 in about 45 minutes to an hour. The room that the purifier was placed in measures roughly 450 square feet.

But the real test was the day I had a ‘hawan’ at my house. I kept the air purifier running from the very beginning when we sat down for the hawan. Initially, it seemed like the air purifier was ineffective. Eyes were still burning and watering, family members coughing one after the other. However, once we wrapped up, the purifier got rid of the smoke pretty quickly, and in about an hour, the air in the room was as clean as a paranoid criminal cleaning a crime scene.

The Dyson Glass HEPA filter can be purchased off Amazon India or you can go to the offline Dyson Stores (only Delhi, and Bangalore for now). The filter costs Rs 2,490.

As for cleaning the filter, I have a dog in the house. She is a golden retriever and sheds enough daily to make another one of her from that fur. But I was delighted to see, that despite all that hair, and the obvious dust that comes in with our shoes, the filter was squeaky clean. If you see the image of the filter above, this was at the end of the review, and I didn't clean it once. And that's no magic, but the engineering of the mesh cover outside does not let big particles like the hair to get in. They just stick outside the mesh and you can dust them off.

The Dyson Pure Cool has a lovely design for an air purifier. I particularly loved the Night mode and the customised schedule feature. I'd rate it quite high for the speed of purification. The Dyson Pure Cool definitely costs a pretty penny at Rs 43,900 and is not for everyone. But if you have that budget, then I would highly recommend it. The thought process behind the design of the purifier, the ease of maintenance, the support via the Link app with features such as Night Mode surely adds a lot of value to the overall package.

If you are looking for something in a budget category, there is always the Mi Air Purifier 2. It may be value for money, but you do miss out on some features.

Worried about pollution? Here are 10 air purifiers across all budgets to help you deal with Delhi's poor AQI