Last year, MediaTek announced that it was temporarily giving up on the high-end smartphone chipset market. A lack of interest from consumers and the relatively lower performance of the chips was a factor in that decision. 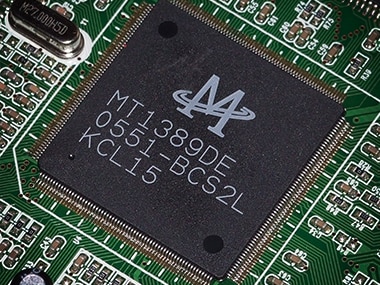 The company has since focused its energies on the mid-range and lower-end of the market, resulting in chips like the upcoming Helio P40 and P70. Both these chips are expected to debut at Mobile World Congress 2018 (MWC 2018) next month.

The P40 and P70 are relatively high-end chips, taking on the likes of Qualcomm’s 600 and 800 series chips. Details of another chip called the Helio P38 have also leaked out now, and according to a Chinese news site, is expected to compete against the Snapdragon 630 line of high-end chips from Qualcomm.

The P38, P40 and P70 appear to be using largely the same architecture. Judging by the leaks, all of them feature an 8-core CPU that uses 4x ARM Cortex A73 cores and 4x ARM Cortex A53 cores at varying clock-speeds. Do note that flagship chipsets like the Exynos chips powering Samsung’s Galaxy S8 and the Qualcomm ones in the Pixel 2 use the same cores. Also, the new P series Helio chips are reportedly built on a 12 nm, which is fractionally less power efficient than the 10 nm process that Qualcomm and Samsung are rapidly shifting to.

In MediaTek’s case, these cores are running at much lower speeds than in their flagships. The SD845 sees the chips hitting 2.45 GHz, in the case of the P38, the CPU is clocked to 1.8 GHz, which is about 30 percent slower. The P40 and P70 are clocked at 2.0 GHz and 2.5 GHz respectively. The graphics unit is also underclocked slightly.

According to GizmoChina, it is expected that the lower clock-speed will give the P38 an advantage in tasks like gaming as it will run cooler and thus, be able to sustain its performance for longer.

Given the stiff competition from the likes of Huawei, Samsung and Qualcomm, MediaTek certainly won’t have it easy. Expect to see all of these chips, and maybe even phones toting these chips, at MWC this year.