China has already built about 25,000 kms network of high speed trains which travels at about 350 kmph.

China has approved a technical plan to build magnetic levitation train which can run at 600 kmph, said state-run CRRC Qingdao Sifang Co. Ltd, the initiator of the research project. 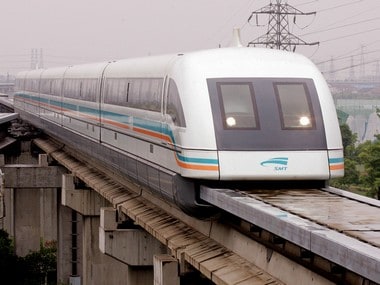 The technical plan was reviewed by 19 academicians and experts. After queries and discussion, the reviewing team affirmed the plan and approved it unanimously on 25 January, official media here reported on 28 January.

The project is one of 18 national key research and development plans set by the Ministry of Science and Technology in 2016.

Japans superconducting magnetic levitation train reached a top test speed of 603 kmph, and the German-designed vehicle can hit 505 kmph. The operating speed of the maglev trains in Shanghai, which use German technology, is 430 kmph.

China has already built about 25,000 kms network of high speed trains which travels at about 350 kmph.