Here are the current and last generation flagship phones with great features and performance under Rs 40k.

Last week we compiled a list of best phones under Rs 30,000 one can buy in India this month. It is time to look at what better options one can spend their money on under Rs 40,000. Just like last month, there’s a good mix of some of the current flagships and a couple of last-generation legendary flagship devices that were priced a lot higher at launch, but have now dropped within this budget and offer excellent value for money. No surprise here – OnePlus 6T(Review) retains its place comfortably. That’s the first phone that comes to anyone’s mind in this budget. The OnePlus 6T ticks most of the boxes for a flagship phone – good design, Qualcomm’s flagship Snapdragon 845 SoC, excellent cameras, ample RAM and storage and a large display with a tiny notch. The phone does skip the headphone jack and the fingerprint scanner has jumped from the back of the phone into the display. Not a great decision but not a deal-breaker either.

The 16MP + 20MP dual cameras at the back do a great job in most lighting conditions and are loaded with features. You get optical image stabilisation to compensate for your shaky hands and the phone can shoot super slow-mo HD videos at 480 fps and full HD videos at 240 fps. Its 3700 mAh battery is an improvement over its predecessors and lasts over a day of moderate usage. Even better, the bundled Dash charger charges it fully in just an hour or so. All things considered, you get your money's worth. 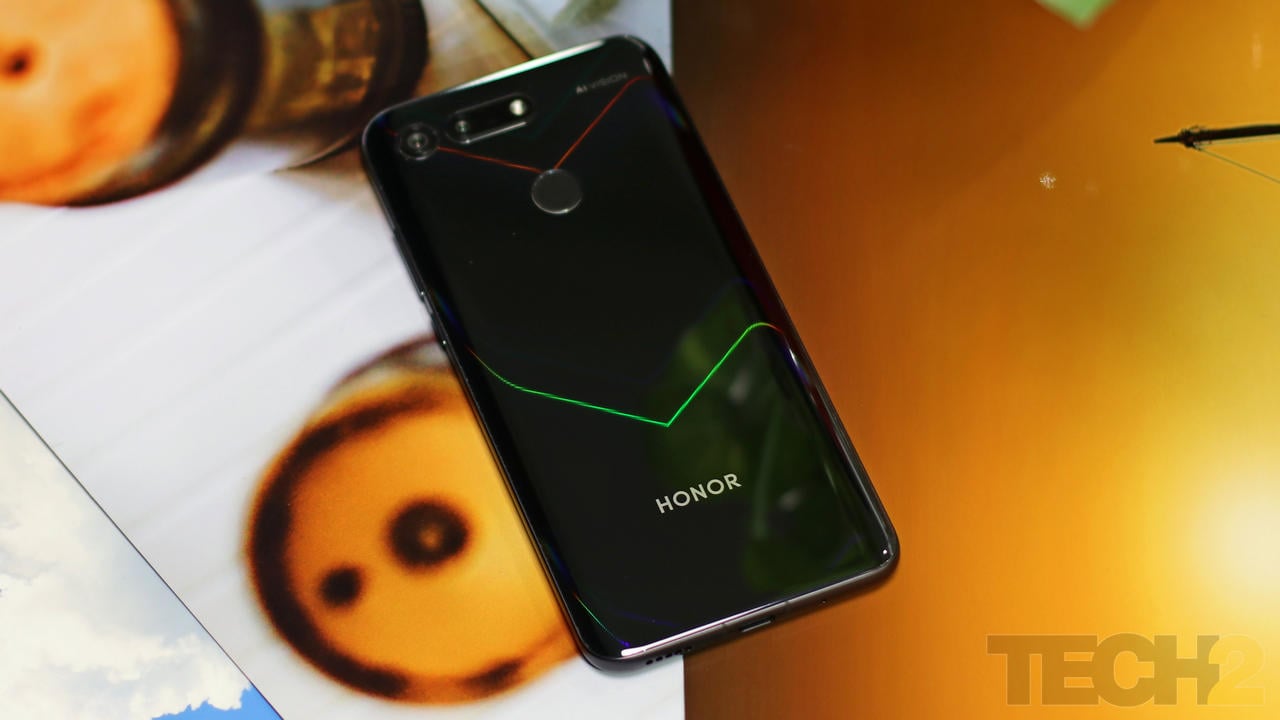 Honor’s new flagship is a very interesting device. The Honor View 20 (Review) has an eye-catching design with a 6.4-inch Full HD+ notch-less display and an in-display front camera. Yes! At the back, you get the Aurora Nanotexture finish that displays multicoloured V-shaped lines running from the top to the bottom when you hold the phone at an angle. The optical illusion, if I may call it that, is quite cool indeed. The Honor View 20 is powered by Huawei’s flagship Kirin 980 chip and comes bundled with 6GB RAM and 128GB storage.

The 48MP camera at the back does a good job in different lighting conditions and the output is at par with that of the OnePlus 6T’s. Just like its more expensive Huawei cousins (P20 Pro and Mate 20 Pro), it uses pixel binning, which combines the data from four pixels into one to capture more details. A 4000 mAh battery keeps it powered comfortably over a day of moderate usage. If you are looking for a OnePlus 6T alternative with comparable performance and better design, this is the phone for you. Asus Zenfone 5Z (Review) is another phone that can take the OnePlus 6T head on and at a significantly lower price point. This one is powered by a Snapdragon 845 SoC too and you can buy the top end variant with 8 GB RAM and 256 GB storage for a good Rs 6,000 lower than the base variant of the 6T. It also lets you expand the storage further up to 2TB with a microSD card. Despite the lower price tag, the Zenfone 5Z looks and feels premium, courtesy of its glass and aluminium body. The 6.2-inch Full HD+ notched display is sharp but you will have to make do with a sizeable notch instead of the drop sized one on the OnePlus.

The 12MP+8MP dual rear cameras do an impressive job in most lighting conditions courtesy of f/1.8 bright 24mm wide angle lens with large pixel size and 4-axis optical image stabilisation. It can also record 4K videos at 30 fps and slow-mo videos at 1080p and 720p resolution at 120 and 240 fps respectively. The Asus Zenfone 5Z is a solid all-round phone with premium looks, good cameras, the fastest SoC currently available and it’s affordable too. Arguably the best value for money phone in this segment currently. If you are looking for the best camera phone under Rs 40,000, this is it. The Google Pixel 2 XL (Review) may be more than a year old but still has one of the best smartphone cameras around, surpassed only by a couple of devices (including its successor) priced 1.5 times its cost or higher. This phone can achieve with a single 12MP rear camera what most phones cannot with two, three or even four cameras that boast of significantly higher number of megapixels. The camera output is excellent in every lighting condition including low light. And it still clicks some of the best portrait shots one gets to see.

The Google Pixel 2 XL is not just about the camera. Like all Pixel devices, it is among the first to receive the latest version of Android. It is powered by Qualcomm’s previous flagship chip Snapdragon 835 which is still more than capable of handling any task. Its QHD+ display is sharper than the phones listed above and the 3520mAh battery manages to keep the device running for a day. If you desired it but thought it was too expensive at launch, now is a good time to buy it. Samsung Galaxy Note 8 (Review) is a timeless legend of sorts. It is a perfect all-round phone with a powerful Exynos 8895 SoC, excellent 6.3-inch Super AMOLED QHD+ display and last but not the least, brilliant 12MP + 12MP dual rear cameras with optical image stabilisation and 2X optical zoom. The camera performance is comparable to some of the top camera phones that you currently get. And let’s not forget the S Pen that’s more than useful beyond scribbling on the phone screen.

Despite being a year and half old, the Samsung Galaxy Note 8 can compete well with any of the newer flagships on all fronts. The launch price of the phone was in the higher 60K range but its 6GB RAM and 64GB storage variant can now be purchased under Rs 40,000 which makes it a great buy even today. The storage can be expanded further by 512GB using a microSD card. Pick one while the stocks last.

Nothing Phone 1 is being manufactured in India, will be sold via Flipkart

Nothing Phone (1) will initially be sold through an invite system in most countries, won't be sold in US at all