Best flagship phones of 2018: From Samsung Galaxy Note 9 to OnePlus 6 to Poco F1

Here are the best flagship phones of 2018 worth your hard earned money. Expect a few surprises.

A great flagship is not just about having a great camera but being a great all-round phone too. It may not necessarily be affordable for the masses but the pricing certainly needs to be reasonable and not delusional. If a camera is the only thing that matters to you in a smartphone, you should check our list of top camera phones of 2018. All the major brands released their top phone lineups this year, some even released two. Some hit the hard reset button while others opted for incremental updates to their previous flagships. Some loaded their phones with the fastest processors available and tons of RAM, while others opted for some unique designs and interesting features.

From the entire cream of the crop, we have shortlisted five phones that we believed were the best of the best this year. We factored in several parameters like design, performance, hardware, features and of course the camera. We also gave weightage to their selling price, as well as the impact on the market at the time of their release. In other words, we didn’t just choose phones released in the last quarter of the year simply because they were marginally better than their predecessors released six months earlier or because they belonged to a top tier brand. So here are our top six flagship phones of 2018 that are worth buying. 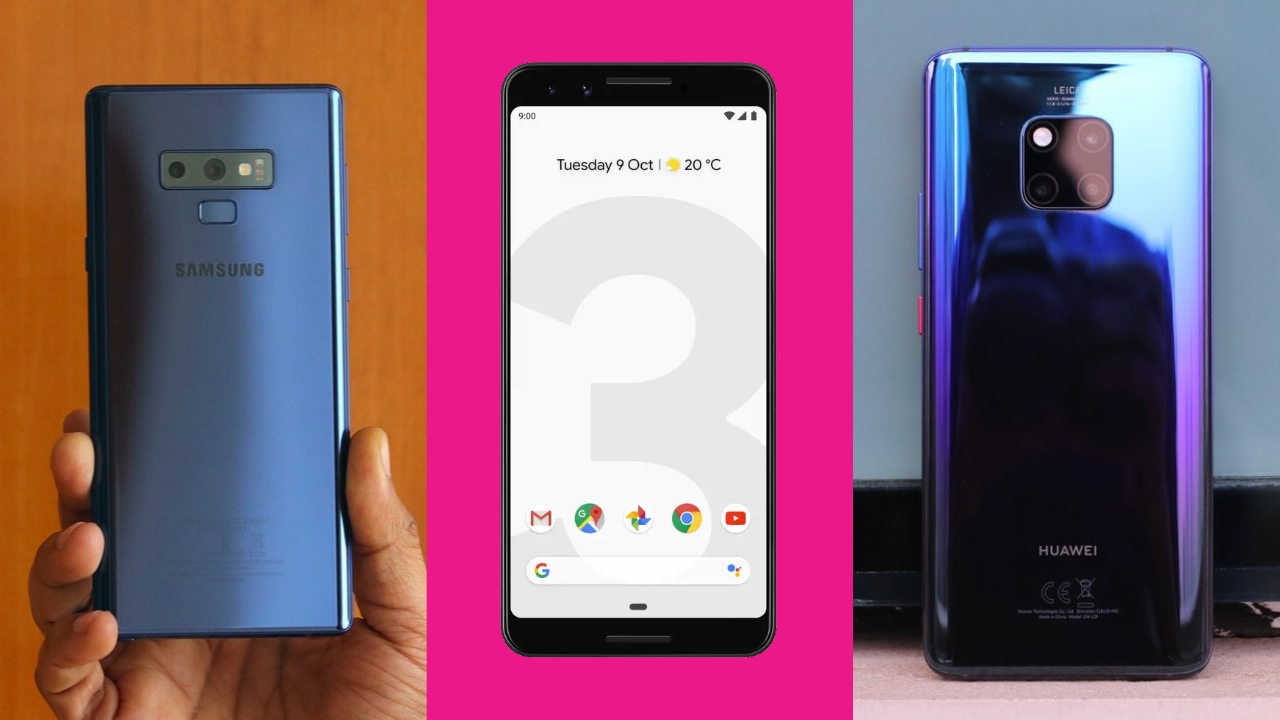 Best flagship phones of 2018 in India

Samsung’s current flagship, Galaxy Note 9 has done a commendable job of exceeding the high standards set by its predecessor, Note 8 in 2017. The Note 9 is a true all-rounder. It features a 6.4-inch QHD+ SuperAMOLED display that is highly colour accurate, bright and easily legible outdoors under direct sunlight. Other than day to day tasks, watching high-res videos on it is a pleasure too, thanks to its HDR10 compliance. It is powered by Samsung’s flagship Exynos 9810 SoC and comes bundled with 6 GB RAM and 128 GB internal storage in the base variant and offers 8 GB RAM and 512 GB storage in the top end variant. Samsung Galaxy Note 9 is the only phone in this list that lets you expand the storage using a microSD card up to 512 GB. 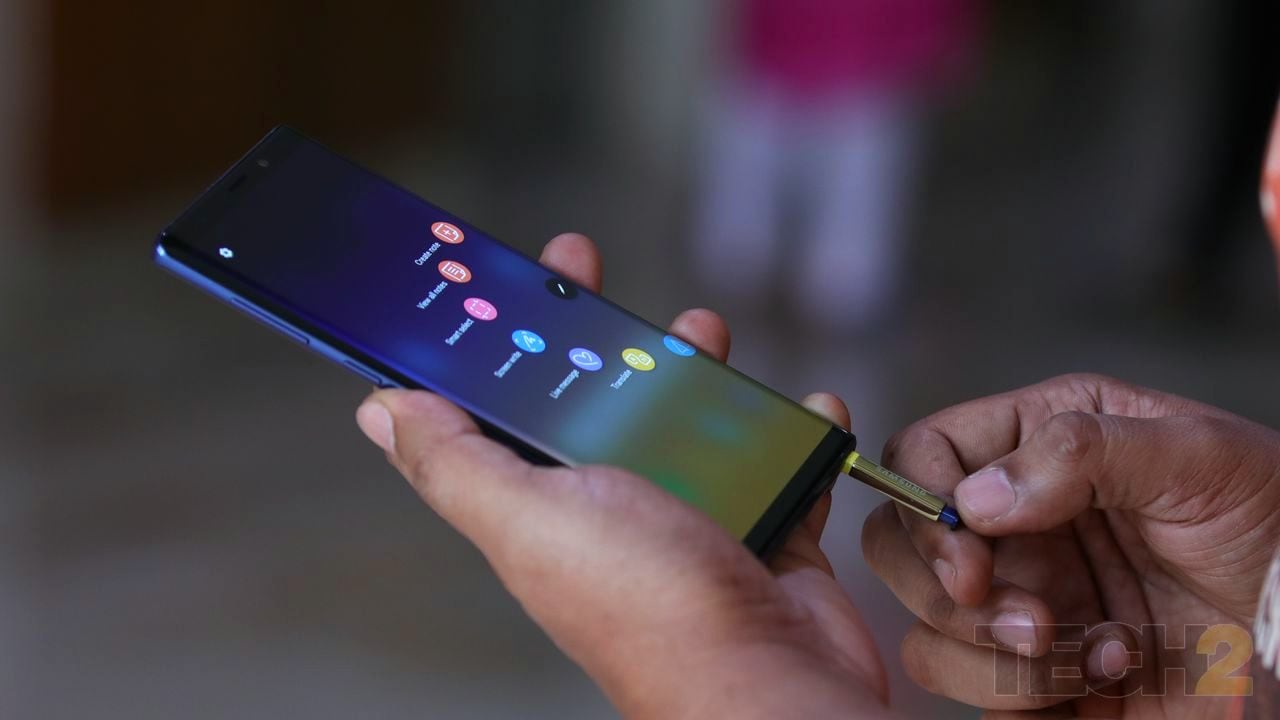 The 12 MP + 12 MP dual cameras at the back do a stellar job. They come with a better tuned variable aperture system that automatically switches between f/1.5 and f/2.4 aperture depending on scene and lighting for optimum output. The captured images have ample detail, true colours and excellent dynamic range. Low-light captures are among the best too with noise levels and saturation well in check. While the Samsung Galaxy Note 9 is capable of recording 4K videos at up to 60 FPS, it also lets you record super slow motion 1080p videos at 240 FPS and 720p videos at 960 FPS. To ensure long recording and playback sessions, the phone comes equipped with a 4,000 mAh battery.

Last but not least, the one feature of the Note series that people are fond of — the S Pen. The new S Pen is now smarter and offers a few new tricks. It can now be used as a trigger to shuffle through your presentation slides, as a physical shutter button for the camera while taking selfies and even as a tool for unlocking the device. And of course, you can scribble on the phone screen and take notes. The Samsung Galaxy Note 9 starts at Rs 67,900 which is fairly reasonable for what it offers and far more sensible than what Apple and Google have priced some of their phones at.

Huawei Mate 20 Pro: The surprise flagship of the year

Huawei has upped their game significantly this year in various smartphone segments and their flagship is no slouch either. The Huawei Mate 20 Pro builds on the goodness of their P20 Pro and takes the performance a few notches higher in almost every department. The Mate 20 Pro offers arguably the best hardware you get right out of the box on any smartphone in 2018. Starting with its sharp 6.4-inch AMOLED display packed with 3120x1440 pixels and HDR10 compliance to the latest HiSilicon Kirin 980 SoC that powers it. It is accompanied by 6 GB RAM and 128 GB of internal storage and runs Android 9 Pie.

The Huawei Mate 20 Pro incorporates a triple camera system at the rear that’s far from being a gimmick. A combination of 40 MP wide-angle lens + 20 MP ultra-wide angle lens + 8 MP telephoto lens not only help you capture excellent shots in varied lighting conditions but also provide you with 5X optical zoom and the ability to take crisp macro shots from as close as an inch from the subject. The night photography is excellent too on the Mate 20 Pro. A special mention for the 4,200 mAh battery that keeps the phone running for over a day comfortably, but more importantly, for the ability to charge it fully in just over an hour. The Huawei Mate 20 Pro is priced at Rs 69,990 in India which is fair for all the goodness it packs.

Google Pixel 3: Overpriced, but has pure Android goodness and a category defining camera

While I like what the new Pixel devices offer (except the boring design), their pricing is way off for my liking; not Apple crazy but still several thousand too high. But let’s think about it for a moment. Why do people buy Pixel phones? Primarily for three reasons — camera, latest OS updates and powerful processing hardware. Now, these three parameters are exactly the same on the Pixel 3 and Pixel 3 XL. So it would be a wiser decision to save a good Rs 12,000+ and opt for the smaller Pixel device. Hence we have included the Pixel 3 instead of the XL in this list. Just like the Pixel 3 XL, it comes with Qualcomm’s latest Snapdragon 845 SoC with 4 GB of RAM. However, you get a more compact 5.5-inch Full HD+ display here as opposed to the 6.3-inch QHD+ notched display on the XL.

A solitary 12.2 MP sensor graces the rear but despite the lack of the second or third camera, it does a phenomenal job in the photography department and manages to capture arguably the best looking images in the market in most lighting conditions, including best portrait shots (bokeh mode) among its peers. If that’s not enough, the selfie enthusiasts get a strong reason to rejoice too. The 8 MP + 8 MP dual camera setup up front manages to capture great selfies courtesy of Google’s synthetic lighting techniques. The wide angle mode now reduces the need for a selfie stick. Google Pixel 3 is priced at Rs 66,500 in India for the 64 GB storage variant which is still manageable as compared to something close to Rs 80,000 that you would need to spend for a larger display and slightly higher battery capacity on the Pixel 3 XL.

The year 2017 saw this interesting new category of phones emerge. They had the makings of a proper flagship device with top-notch performance, a high-end but practical feature set and a surprisingly affordable price tag. They were called Affordable Flagships. This category is certainly here to stay. So we thought of paying it due respect and featuring a couple of phones that made this category not just relevant but extremely desirable too in 2018. 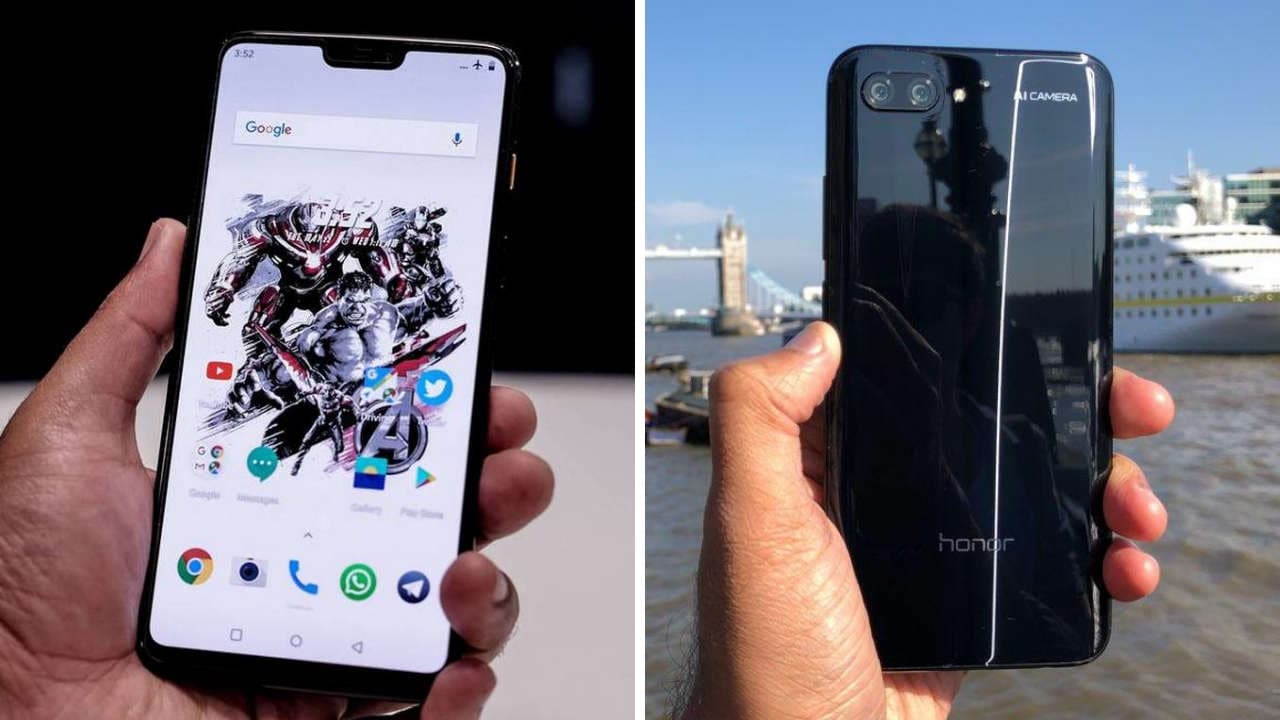 Yes, there’s already a OnePlus 6T out in the market. But the kind of impact that the OnePlus 6 created at launch was way higher than what the 6T managed now. The OnePlus 6 was a massive improvement over the OnePlus 5T in almost every department. The OnePlus 6T, on the other hand, is just an incremental update with a fancy screen over the 6. Plus the missing 3.5mm headphone jack and the fingerprint scanner moving to the screen hasn’t gone down well with a majority of users, including yours truly. The OnePlus 6 had no such issues.

Staying true to the OnePlus tradition, the OnePlus 6 features the latest Snapdragon 845 SoC with a minimum of 6 GB RAM. The company fitted it with a 6.28-inch 19:9 Full HD+ Optic AMOLED display with a notch. The front and back glass around an aluminium chassis makes the phone look extremely classy. The major improvement, however, was seen in the camera department. While on the surface, it seems to bundle the same 16 MP +20 MP combination seen on the 5T, the output is noticeably better courtesy of wider 25mm lenses, larger sensor and pixel size. Add optical image stabilisation and ability to capture super slow motion videos to the mix too. All this and more for a price starting at a shade under Rs 35,000 and you have one hell of a deal and a place in our top phones of 2018.

Huawei sub-brand Honor’s flagship, Honor 10 didn’t see the kind of fan following that OnePlus phones enjoy but it is one solid performer nonetheless. For starters, the design is simply eye-catching and still one of the best around with the curved glass and aluminium frame. The phone feels great in hand and the dual-tone back adds to its charm (especially the Phantom Blue variant). In a world where phone displays are growing larger by the month, Honor 10 manages to stay compact and facilitates single-handed operation courtesy of its 5.84-inch Full HD+ notched display that manages to output accurate colours. It is powered by Huawei’s then flagship Kirin 970 SoC with 6 GB RAM and 128 GB of internal storage.

Photography department is handled by a combination of 16 MP + 24 MP dual cameras backed by AI. The camera captures sharp images in average to well-lit conditions and the output is more than respectable in low light conditions too. Of course, the low light output cannot be compared to the likes of the Mate 20 Pro or Note 9, but for a selling price less than half of those two, it punches way above its weight. The Honor 10 debuted at Rs 32,999 seven months ago and currently sells for close to Rs 25,000 that takes its value for money proposition through the roof.

How can we have a list of affordable flagships without mentioning the one phone that completely redefined what constitutes a flagship offering? 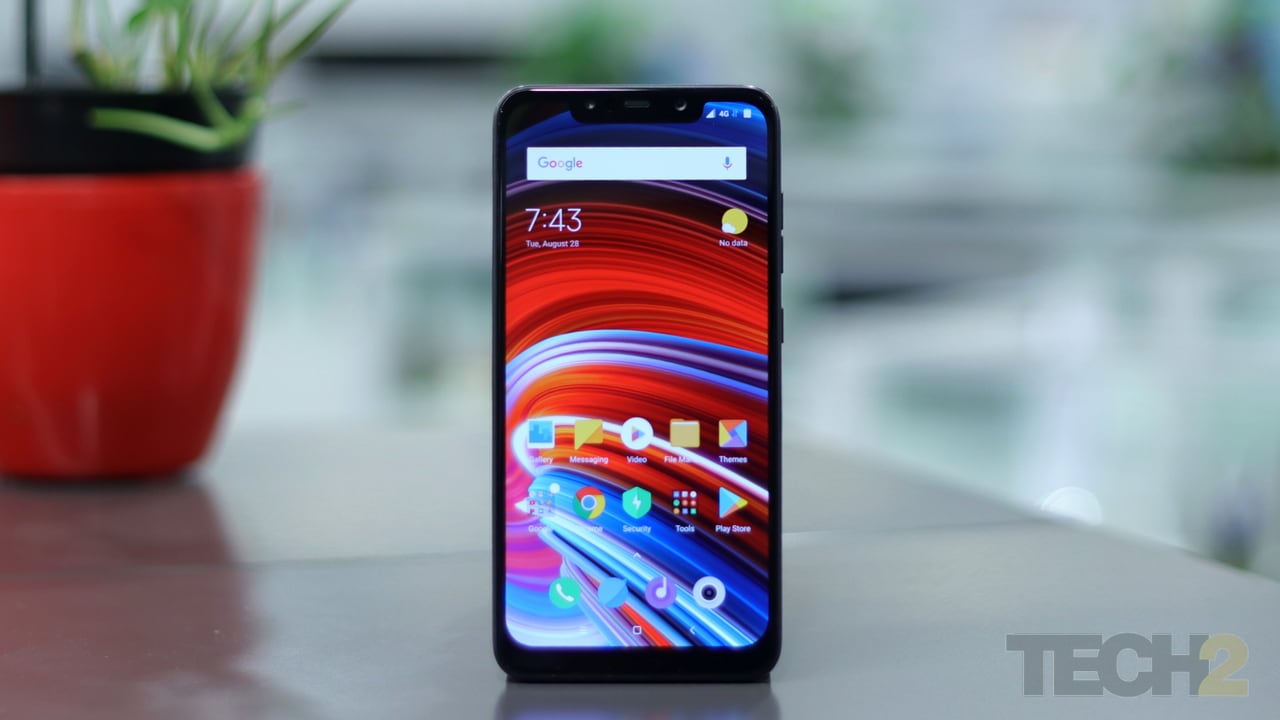 Xiaomi launched a sub-brand this year and called it Poco. The first phone coming out of this was the Poco F1 which had all the flagship features you could think of — Snapdragon 845 SoC, up to 8 GB RAM, up to 256 GB storage, 4,000 mAh battery, great gaming experience and not to forget, the liquid cooling pipe to keep the heat under check. And all this, at a starting price of Rs 19,999! This was at a time when all the other Snapdragon 845 SoC phones were selling from Rs 30,000 onwards. Yes, there were some compromises such as a bland design, Android Oreo out of the box with MIUI skin and an average camera. But even the best flagships have some drawbacks and the kind of value proposition Poco F1 was offering, one could overlook the flaws.

That concludes our list of top flagship phones of 2018 that are worth spending on. Yes, you may have found a major brand or two missing, but that’s the nature of this highly competitive space where you cannot afford to take things for granted. Let’s hope they come back stronger and wiser next year.

Huawei Mate 20 Pro vs Pixel 3XL vs iPhone XS vs Note 9: Which shoots the best photos?

Samsung Galaxy Note 9 will not get a significant performance boost over the S9: Report