Apple's second-generation AirPods set to arrive in 2018, will let you activate Siri by voice

Currently, to activate Siri, the user has to double tap the side of the AirPods.

Apple is reportedly going to upgrade its wireless earphones called AirPods to the second generation this year. These new AirPods will come with an upgraded chip which would help users summon Siri by simply speaking out the command 'Hey Siri'. This exact command is the way to summon Siri in both the iPhone and the newly released smart speaker HomePod. 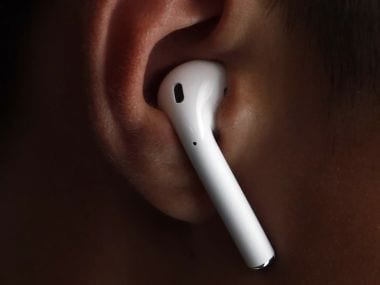 KGI Security Analyst Ming-Chi Kuo has predicted that Apple AirPod shipments are likely to double this year with an expected sale of 26-28 million units. He had also successfully predicted that Apple was working on the second generation of the Apple AirPods back in December last year. Kuo was, however, mum on what changes we could expect in this year's new AirPods except for a "smaller quartz compartment". Currently, to activate Siri, the user has to double tap the side of the AirPods.

As per a report by MacRumors, this new model has been named internally as the B288 and it is possible that there would also be third-gen AirPods coming, which would be splash and dust resistant. The currently available AirPods are not bad either when it comes to water resistance.

The report claims that even though Apple doesn't advertise the AirPods as water resistant, the earphones were working fine after being submerged in water to a depth of 1 feet for up to 5 minutes.

Apple has bagged the honour of being the most innovating company in the world with the reasons being Apple AirPods, Watch Series 3, ARKit and iPhone X. We had reviewed the Apple AirPods and concluded that it "feels impressive once you overcome the fear of losing it". You can check out the review here.