Apple iOS 12 update: How to use the new Screen Time feature

Apple iOS 12's Screen Time tries to enforce good habits but it all boils down to self-control.

Seems like everyone’s talking about digital wellbeing these days. But while everyone loves to preach about it, few will religiously put in the effort to follow it.

Google was the first to bring the topic to light at Google I/O 2018 in May, where executives on stage explained how the new Digital Wellbeing features on Android will help users learn about their usage habits, which should hopefully bring about a change with their smartphone addiction. 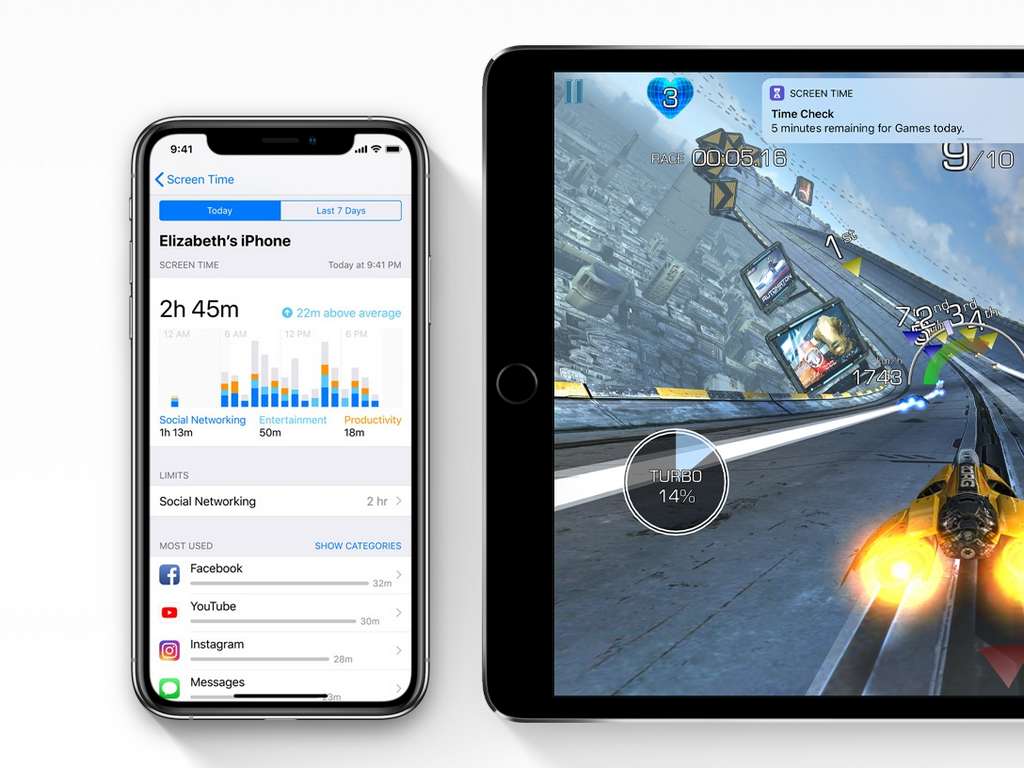 Next up was Apple at WWDC 2018, that showcased a new feature called Screen Time that would help users of its iOS-enabled devices take control of the time they spend with them.

While Google rolled out Android Pie back in August, its Digital Wellbeing app is still in beta. Meanwhile, Apple rolled out iOS 12 last night with a fully functional Screen Time feature, so let’s have a look at how you can use it and what data does it have on offer that you can use to feel a bit guilty about your device usage habits and possibly improve.

Where can I find the Screen Time feature?

One of the most disappointing thing about the Screen Time feature is the fact that it does not have an app or an app shortcut on the Home screen. Thankfully, Apple does let you add a widget that will get you quick access to the feature, one that also gives you a quick glance at your current statistics about your app usage. Strangely, the Screen Time feature runs independently and is not connected to the Health app in iOS. If you want to manually check out all your data, you have to head to the Settings app> Screen Time.

What does Screen Time offer?

Screen Time offers a ton of data about how your use your phone. Switched on by default, Screen Time will track which apps you use, when you use them and unlike Android’s Digital Wellbeing, can even set app limits for particular apps and block apps entirely in the Content & Privacy Restrictions section.

It’s quite the useful tool, provided you are self-motivated to begin with. Parents will love it because it lets them control how their kids use their smartphones. Of course kids will gradually learn to hate it because everyone hates restrictions. More importantly, Screen Time is not just restricted to your iPhone, but all devices that run iOS. You can choose to connect and share data from different devices using a common iCloud account.

Can I turn off Screen Time?

Yes. If you are not interested or somehow find it too creepy that your phone is spying, learning and recording every single detail about your app usage, you can simply head to the Settings app> Screen Time> scroll to the bottom of the page> and then tap to Turn Off Screen Time. Once switched off, your phone will no longer track your downtime and your content and privacy restrictions will be turned off.

Now that we have learnt about Screen Time, let’s have a look at what it can do for you. The colourful status bar summarises all the data into three categories.

When you open up the feature in the Settings app, the first thing you will see is an overall report in the form of the status bar that is also visible in the widget under the SCREEN TIME section.

If you have connected multiple devices (like additional iPhones and iPads) you can check out all of that data in detail by tapping on the colourful status bar.

Here you will have access to more detailed data. With a chart that showcases your detailed app usage by dividing the apps into three wider categories: Social Networking, Productivity and Entertainment. The Screen Time data is divided mainly into Most Used, Pickups and Notifications

Aptly titled, the section showcases the most used apps either by ‘Apps or Websites’ or by ‘Categories’. You can check each of these apps to in detail and even get a daily usage average per app. I was quite surprised how recently I visited the Settings app!

This section gives a rather interesting insight into which app annoy or pester you the most. Office emails using the Outlook app took top priority here in my case followed by the Telegram messaging app and WhatsApp. Gameloft’s Asphalt was fourth in rank when it came to throwing notifications at me. May it’s high time I turned them off. As you can see these are are indeed interesting data and insights.

Coming back into the main Screen Time page are a few more options.

Downtime: The feature lets you schedule and get some ‘me time’ away from your screen. Downtime is very different from the Do Not Disturb mode in the sense that Downtime will not display any incoming notifications on your screen and limit app usage. Downtime is not the same as the Do Not Disturb feature.

Found under Settings> Screen Time> Downtime you can set a custom schedule for downtime. Once activated (manually or by schedule) only the apps and calls that you have allowed will be able to annoy you. You can choose the apps you want to be made available during Downtime in the Always Allowed section. I somehow felt that it would have been better to combine DND and Downtime under one section as the new feature is bound to confuse most casual users.

App Limits: A feature that most parents will love (and kids will hate) is App Limits. App Limits allows the user to set self-imposed time limits for using the app. Think you are using the Instagram app a bit too much and need to cut down on it? Simply head to Settings> Screen Time> App Limits> and add the category of apps (Social, Entertainment, Productivity) you want to limit. App Limits feature is really useful provided you use a Screen Time passcode with it.

App Limits apply only to app categories and not individual apps. So you will need to tap on ‘Social Networking’ apps and limit all of them instead of just one single app. 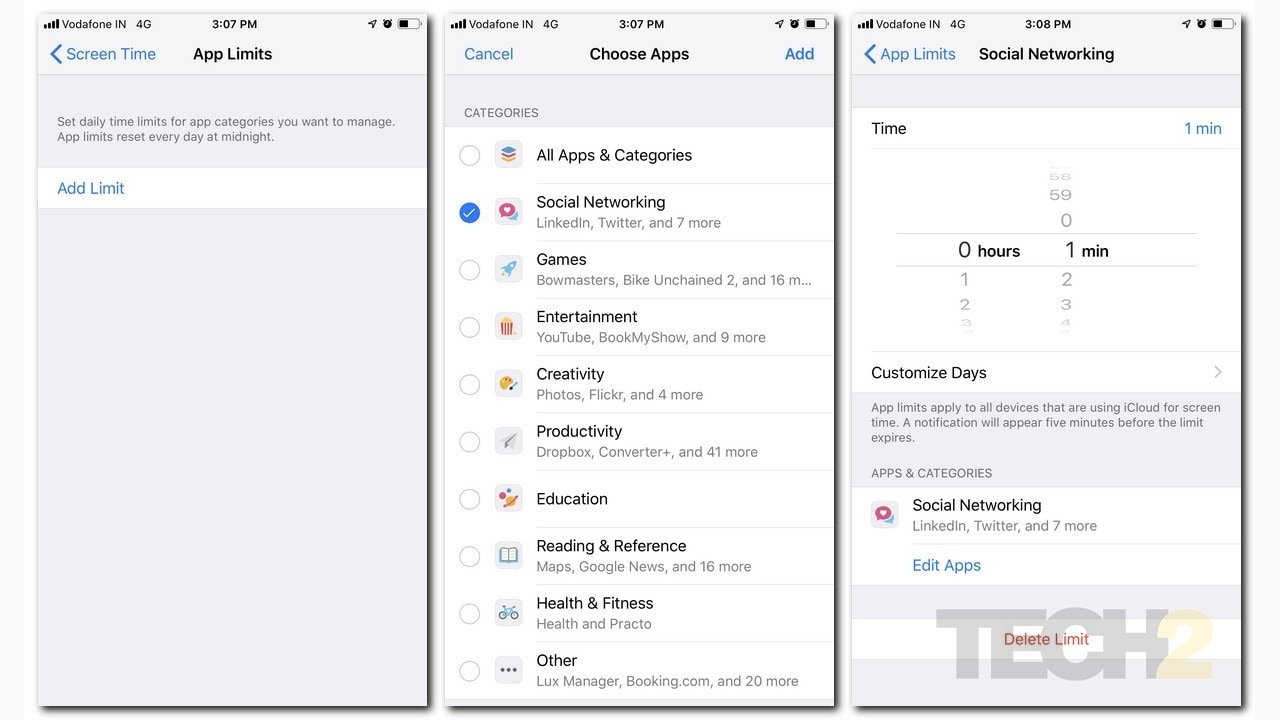 The categories in App Limits are a bit restrictive in the sense that they are set by Apple.

Once the time limit is set iOS lets you know that an app has limited usage, with a small hourglass indicator next to the app icon on the home screen. Once the limit has been reached, the app icon turns dark and will let you access it after giving you a warning that you have reached your limit for the day. Tapping on ‘Ignore Limit’ gives you a snooze-like feature to use it for 15 additional minutes or simply lets you ignore the limit for the day altogether.

In short, self-imposed App Limits make little sense. Unless you use a Screen Time passcode lock and throw away the key.

In this case, it does get useful for parents who would want their kids to cut down on iPhone or iPad usage. If you have added your child to Family sharing, Screen Time will also let you view your child's Screen Time reports and even set parental controls from your iPhone, without the need to add a Screen Time passcode on your child's device.

Even greater control is available in the Content & Privacy Restrictions section where users can block not just apps and items from the App Store or iTunes, but inappropriate content altogether. We have discussed this section in detail here.

And this pretty much covers the Screen Time feature in the new iOS 12 update. While there’s a mammoth effort by Apple here to keep a tab on your app and smartphone usage by scaring you with some interesting insights and tons of data, it all boils down to self-control. Unless you happen to use a Screen Time passcode that makes the feature a lot more restrictive and useful.