After Xiaomi, it's OnePlus' turn to discover that users prefer stock Android over custom ROMs

OnePlus took the higher ground by posting the unfavourable results rather than delete them, like Xiaomi.

After Xiaomi's poll debacle on Twitter, Chinese rival OnePlus also jumped on the boat with its own poll to find out which OS users prefer. The two options in the poll were Oxygen OS and Pure Android. The poll was being conducted by Szymon Kopec, the product manager at OnePlus. The update is rolling out to devices

Now at one point of the poll, we could see that users were in favour of Oxygen OS over Android. At this point, co-founder of OnePlus Carl Pei tweeted out "Don't delete this poll". This could partially have been to avoid a Xiaomi-like situation and partially due to the belief that Oxygen OS would triumph over Pure Android in the poll. 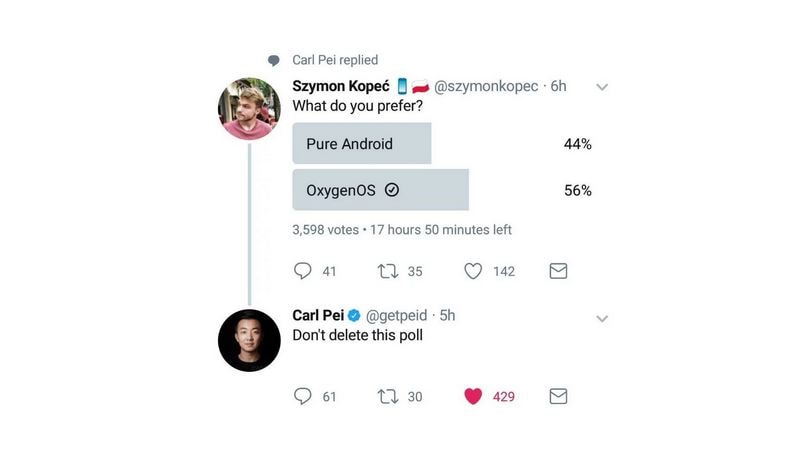 Alas, for OnePlus, at the very end we saw that, as in the case of the Xiaomi poll, Pure Android snatched another victory with 58 percent out of the 10,349 voters voting for it. OnePlus took the noble route (For the first time in its life?), posted the results, and Szymon Kopec said that all the negative reviews received on Oxygen OS would help OnePlus improve the product for their customers.

What do you prefer?

Our own poll, which is still running by the way, indicates that pure Android is still the people's choice of OS. The writing's on the wall, Xiaomi and OnePlus. We want more pure Android smartphones!

Since @XiaomiIndia is too afraid to find out, which smartphone OS do you prefer? P.S- We promise not to delete this poll 😜@Samsung_IN, @GoogleIndia, @Android, @HiHonorIndia — Tech2 (@tech2eets) February 12, 2018