Acer's Swift 5 Notebook comes with Colour Intelligence technology which helps in optimising screen colour and brightness without over saturation.

Acer has launched a new portable laptop in the Swift series, called the Swift 5 Notebook. The 15-inch laptop weights less than 1 kg and comes with a Full HD IPS touchscreen display with 87.6 percent screen-to-body ratio. Acer launched the Swift 5 in New York at the Global press conference next@acer. 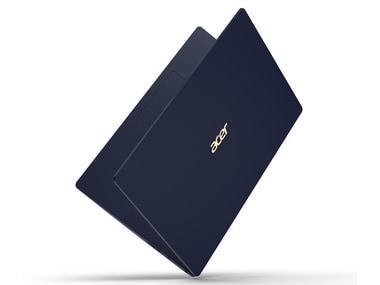 Acer's Swift 5 Notebook comes with Colour Intelligence technology which helps in optimising screen colour and brightness without over-saturating the display. It is powered by Windows 10 and latest Intel processor.

Acer Swift 5 comes with a fingerprint reader which enables the Windows Hello feature to securely log into the system. The Taiwanese company has provided 1 TB of SSD storage with and 16 GB DDR4 memory with the laptop.

Connectivity option on the Acer Swift 5 Notebook includes one USB 3.1 Type-C Gen 2 port, two USB 3.1 Type-A ports, one of which is capable of charging the laptop when its powered off, an HDMI port and a slot for SD card reader.