Happy Valentine's Day: Kickass gift ideas for the gamer in your life

Looking for solid video game-centric gift ideas for the man in your life? Well, look no further.

There are a few things as laboured as the unholy union of gamers and Valentine’s Day. For starters, the best-case origin story of this made-up festival involves a brutal beheading. The worst-case, however, ups the ante and revolves around a bunch of drugged-up, naked men whipping the ever-loving crap out of equally drugged-up and naked women with the hides of freshly slaughtered dogs and assorted farm animals.

The pain and suffering continue into the 21st century, because it is that time of the year when underpaid and overworked souls like yours truly are forced to write articles feeding the fantasies of (mostly) single male gamers. Fantasies involving totally real girlfriends, who totally care about video games and buying you video game related V-Day gifts. Why else would all these Valentine’s Day articles be published only a day prior, by when it would already be too late to buy any of the gamer-y items listed?! Wouldn't you love it if your imaginary girlfriend gifted you some kickass gaming gear?

Now that we have established that mostly everyone here is basically LARPing about having real healthy relationships, we can finally move on to what really brought you here – kickass gaming gear that you’d want from your imaginary girlfriend.

What follows are Valentine’s Day gift ideas carefully fine-tuned to match how deep your love/pockets run for your one in-a-million gamer boyfriend.

I love my bank balance more than my boyfriend

It's not that you’re cheap. On the contrary, you are someone who values creativity over solving problems by throwing money at them. That’s why your V-day gift doesn’t necessarily have to be expensive, but it should instead showcase your imagination and understanding of your boyfriend’s needs. The fact that these gift ideas are cheap is purely coincidental. We believe you.

The pinnacle of couch co-op: A Way Out and Xbox Elite controller

What is the one thing every gamer desires more than an NVLinked pair of RTX 2080 Ti GPUs or 60 fps gameplay (for our console brethren)? The answer is a girlfriend that would willingly rush B with you. However, the cruel truth is that few unicorns are willing to spend the two years it takes to not suck at CS:GO. And even then, it is impossible to snuggle up on a couch with your boyfriend and play CS:GO with a gamepad. Just because certain things can be done, doesn’t mean you should do them. That’s precisely why we don’t eat Tide pods and play competitive shooters with a gamepad.

Now that we have that out of the way, the best most realistic chance you have at playing a game with your boyfriend is with Hazelight Studios brilliant couch co-op game A Way Out. This comes from the same indie developer that gave us the brilliant Brothers: A Tale of Two Sons. Most shockingly, this is also the rare instance of an Electronic Arts published game not being a steaming pile of excrement. This is essentially EA atoning for its many sins by funding this independent developer to make a game that we truly deserve, which is also a bit like Indian underworld gangsters patronising local Ganpati pandals.

A Way Out might be tainted with a bit of evil, but that doesn’t mean you can’t thoroughly enjoy it. If you still don’t believe it, you might want to reconsider after you watch this infamous “F**k the Oscars” speech delivered by the game’s principal developer Josef Fares, even as Geoff Keighley can be seen visibly wincing at the thought of receiving angry phone calls from Doritos and Mountain Dew reps threatening to pull sponsorship. At any rate, Fares’ bat-poop insane passion shows through in what could only be described as the best couch co-op experience of this generation. A game made with that sort of passion can’t go wrong.

Just don’t forget to bundle the game copy with an extra controller, depending on the platform of his choice. If he prefers the PC or Xbox platforms, you might want to go for the Xbox Elite controller; that is, if you don’t want to look entirely cheap.

His entire childhood in a handheld: ODROID-Go

Unless you’re dating an underage kid (at which point, I fervently hope you are one too), your boyfriend has grown up playing classic 8-bit NES clones. What better way to send your gamer boyfriend on a nostalgia trip than with a hand-held console that is custom designed to play NES, Sega Master System, Game Boy/Color and Game Gear ROMs?

The custom SOC of the ODROID-Go might not be as powerful as the Raspberry Pis used to emulate legacy consoles such as the N64 and PlayStation 2, but it is good enough to run all his childhood classics in a hand-held form factor, replete with an excellent inbuilt LCD display and really good D-pad as well as face buttons. The emulation is spot on and it’s an absolute blast to play NES classics such as Contra and Super Mario Brothers 3 on the go.

What’s more, you can buy it as an easy-to-assemble kit from HardKernel’s shop for just $32. The only problem is that it ends up costing three times as much owing to a barrage of import duties levied in our great country. Because when you buy one ODROID-GO, you are legally required to buy two more for Mr Modi. Well, at least the games are “free”.

Looks like we have the veritable sugar momma here. The most liberating part of having cash in spades is that you don’t have to waste any time being creative or thoughtful, or any other fancy words used by poor people to make up for the fact that their cheap gifts suck. The best things cost big bucks, so your boyfriend is definitely going to love these.

I must get my boyfriend off PUBG Mobile: MSI GS65 Stealth

Do you feel like a mistress to your boyfriend’s morbid addiction to PUBG Mobile? Well, the only way to get him off that abomination is by gifting him a full-blown gaming laptop. For this purpose, you can hardly find anything better than the MSI GS65 Stealth gaming laptop. In addition to housing a monster of a Coffee Lake six-core, 12-thread Intel Core i7 processor, the GS65 also crams in a powerful Nvidia RTX 2070 GPU. And all this is done while maintaining a slim form factor to achieve the mutually exclusive traits of portability and high-performance gaming.

The laptop harnesses its mad processing power to drive the 144 Hz panel. The only feature sorely missing here is Nvidia’s proprietary variable refresh rate technology G-Sync. If your boyfriend complains about this, you can always ask him to go back to the cesspool otherwise known as PUBG Mobile. Because true redemption solely lies in playing PUBG like the good lord intended: with a keyboard and mouse connected to a gaming PC.

The definition of overkill: An NVLinked pair of RTX 2080 Ti GPUs

Remember how I mentioned tossing in a pair of Nvidia RTX 2080 Ti GPUs in a gaming rig at the beginning of this article? Well, I wasn’t kidding. If your boyfriend is a gamer who has everything, there’s nothing better than utilising two monstrous RTX 2080 Ti GPUs to feed enough frames to satisfy even a 240 Hz gaming monitor. The cherry on top of this already expensive cake is to make both those cards MSI’s factory overclocked Lightning Z models. 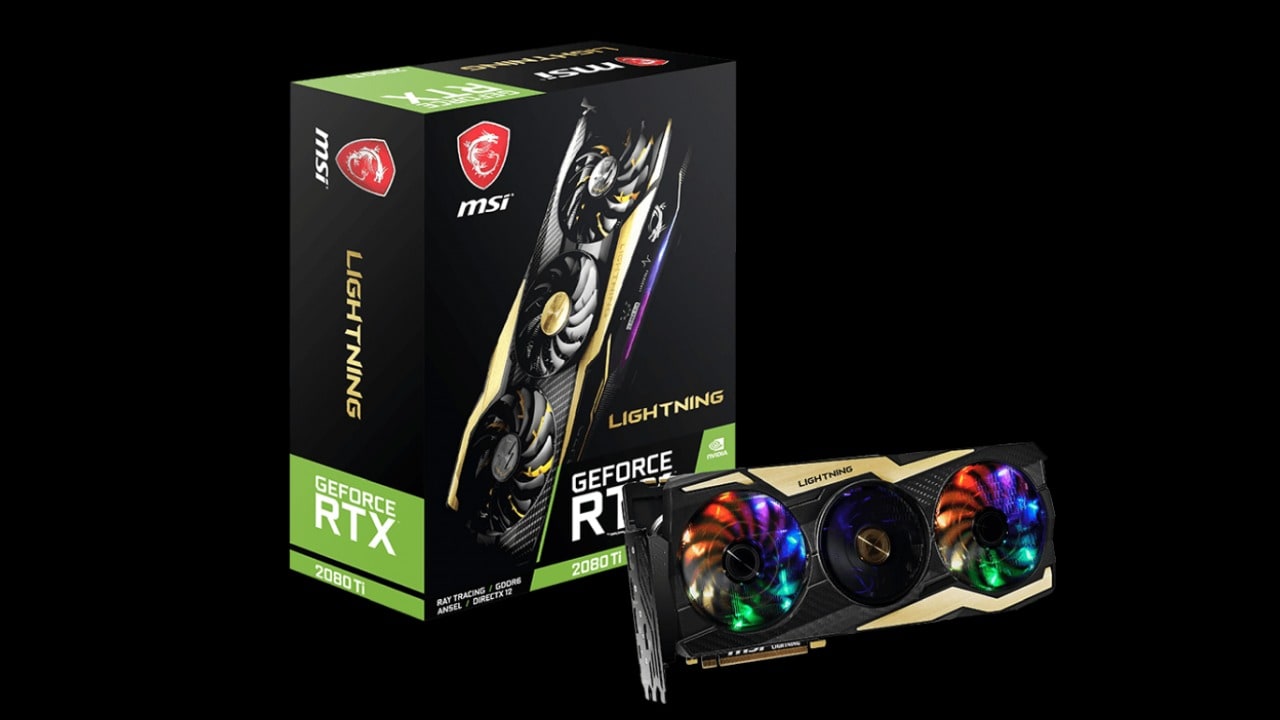 Costing an eye-watering $1,600 a piece, these cards clock in at 1,770 MHz out-of-the-box and have a robust power delivery system that sucks up to 60 A of current through three 8-pin plugs. Combine that with high quality VRM and robust 19-phase power delivery, and you get higher binned GPUs that can be overclocked even further. You know the components are reliable when the manufacturer includes a dedicated BIOS dip switch to enable a separate mode optimised for Liquid Nitrogen cooling.

If you've managed to make it this far, you might want to check out our carefully curated list of shows, podcasts, literature, toys & gadgets for consensual couples to try.

The single’s guide to surviving Valentine’s Day: A three-step program

Valentine's Day: The post-millennial glossary to glo up this day for you

On Valentine’s Day, filmmakers' 'love letters' to each other — from Wes Anderson on Ray to Del Toro on Hitchcock

An offbeat Valentine's Day: Here's a playlist of Bollywood's most cringe-worthy love songs