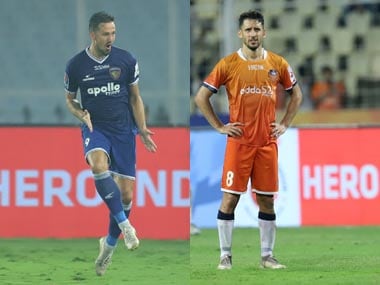 Preview: Having made a superb turnaround after a poor start, two-time champions Chennaiyin FC will look to continue the good run when they take on FC Goa in the first leg of the ISL semi-final on Saturday.

The Blues entered the 2019-20 season after a nightmarish performance in the previous one, having finished with the wooden spoon and fewest points (nine). Things didn't get better at the start of season as they were languishing at the bottom with one win from six games before they witnessed a change in fortune after Owen Coyle replaced John Gregory as the head coach.

The transformation under Coyle has been remarkable and in 12 games, Chennaiyin has got 24 points — from 7 wins and 3 draws — to seal a play-off berth.

Now, the team has everything to play for when they take on FC Goa at the Marina arena. Given the form of the strikers, the defence of both the teams will be tested.

Lithuanian Nerijus Valskis has been in top form for Chennaiyin with 13 goals. He has been key to the team's revival and the host will hope the marksman continues his good run.

Maltese Andre Schembri too has been among goals and with the likes of Anirudh Thapa, Eli Sabia and Rafael Crivellaro coming into their own, the FC Goa backline will have a lot to worry about.

Coyle, since his arrival, has spurred the team's attacking instincts and that seems to have paid dividends.

Attack could be the way forward when Chennaiyin come up against an equally attack-minded Goa.

Coyle would also be hoping his defence gets their act right.

While Valskis & Co have powered Chennaiyin's revival, some credit should go to the mid-field which has done a good job. Thapa, Edwin Vanspaul, who has been called up for a national camp by head coach Igor Stimac, and Lallianzuala Chhangte have stepped up and made the team a force to reckon with.

Goa, on the other hand, are on a five-match winning streak.

Ferran Corominas has 14 goals so far, one behind the league's top-scorer Bartholomew Ogbeche and alongside Hugo Boumous, the visitors boast of an impressive strike force.

Chennaiyin's defence will have its task cut out if the marauding FC Goa line-up has to be contained and this could have a huge bearing on how the first leg of the semi-final pans out.

The last encounter between the two sides in Chennai ended in a seven-goal thriller which the Gaurs won and a repeat is on cards with a berth in the summit clash at stake.