Catch all the latest updates from the 2018 FIFA World Cup Group C clash between France and Peru.

France have been uninspiring in victory. They have show neither clear purpose going forward, creativity or balance in the middle, nor security at the back. But they will take the win and go through to the knockouts. The tournament will miss these gutsy Peruvians and their legion. That wraps things up here in Ekaterinburg. Time now to see what lies in store for Lionel Messi and who France might end up playing in the stage. Goodnight from me.

Varane gives the ball away cheaply on the right. The ball is rolled on to the path of Aquino whose fiercely struck shot hits the top-right corner of the frame of the goal. Lloris was comprehensively beaten.

Pogba steals the ball in the Peruvian third and slips it in to Giroud. The Chelsea man shoots but his shot loops over Gallese after taking a touch of Rodriguez. The ball falls kindly onto the path of Mbappe who pokes it into the empty net. He also becomes the youngest ever goalscorer for France at the World Cup!

Peru's talismanic captain Paulo Guerrero starts and the South American side's hopes will be pinned on him.

Didier Deschamps has dropped Ousmane Dembele and Corentin Tolisso and has opted to start with Olivier Giroud and Blaise Matuidi. Hugo Lloris wins his 100th cap for France.

Head out to our live blog of Argentina's Group D clash against Croatia as Lionel Messi and co look to get their first win of the tournament.

This is how Group C looks like after the end of the second round of matches. France go through to the Round of 16 but Denmark with four points and Australia with two points will be looking to finish second. The Danes will face France while the Socceroos take on Peru in the final round of matches. 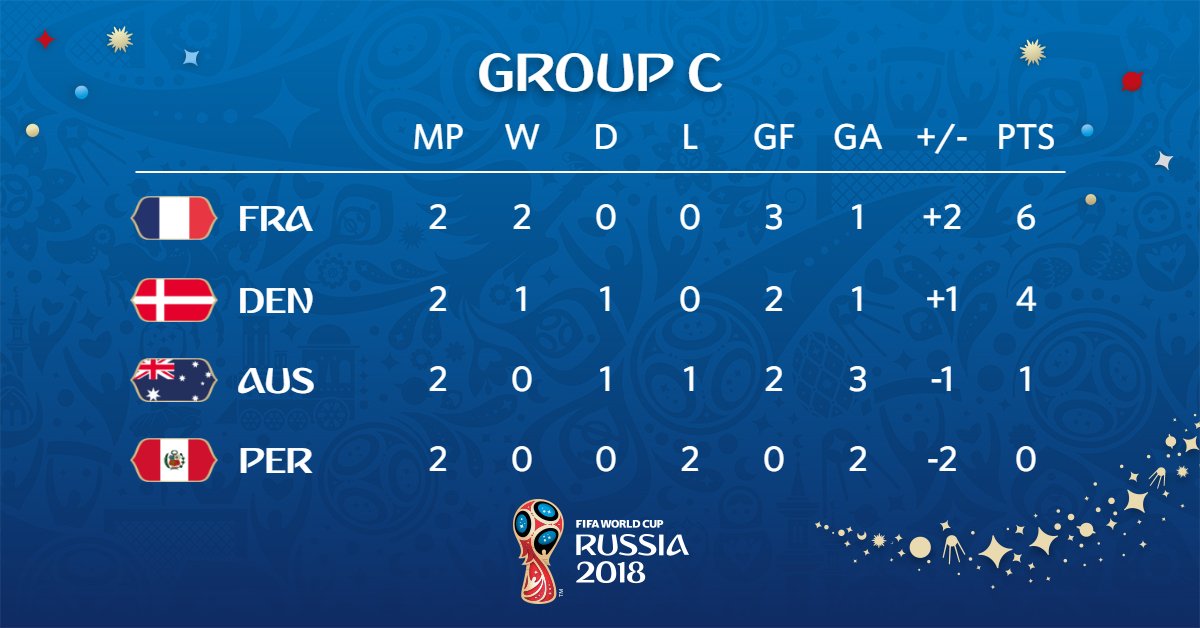 Take a look at the stats from the match 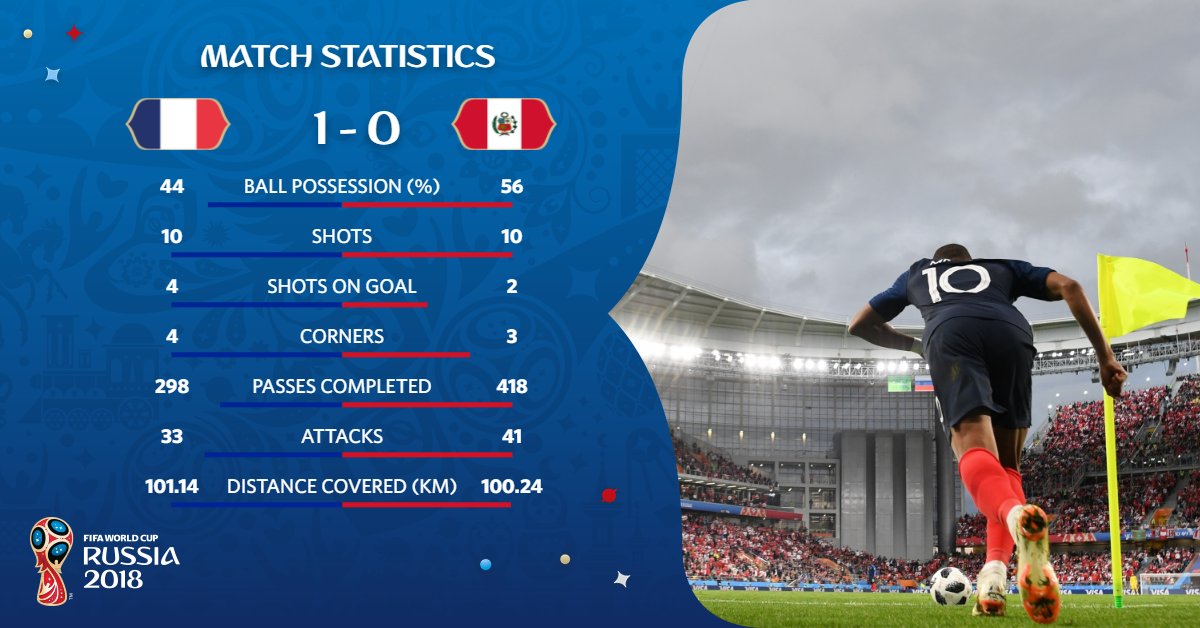 Didier Deschamps is the first manager to win 50 games in charge of the #FRA national team.

Hugo Lloris with a clean sheet on his 100th appearance

France have been uninspiring in victory. They have show neither clear purpose going forward, creativity or balance in the middle, nor security at the back. But they will take the win and go through to the knockouts. The tournament will miss these gutsy Peruvians and their legion. That wraps things up here in Ekaterinburg. Time now to see what lies in store for Lionel Messi and who France might end up playing in the stage. Goodnight from me.

Giroud holds off the challenge from Aquino and surges ahead. He shoots but his shot is deflected behind for a corner. That surely is the end of Peru's campaign at the World Cup.

Fekir wins a free-kick near the corner flag. Dembele swings it in towards N'Zonzi but he's beaten to it by a Peruvian defender. The ball falls to Matuidi who volleys it at goal. The ball was always curling off goal.

Four minutes added on after the end of the 90. Four minutes for Peru to try and stay in the tournament.

Deschamps takes off Pogba and sends on Steven N'Zonzi for the final two minutes plus stoppage time.

France will seal their spot in the knockout rounds with victory thanks to the 1-1 stalemate between Australia and Denmark and defeat for Peru will end their Russian campaign.

The 31-year-old Giroud will be the focal point of the French attack, with starlet Kylian Mbappe and Antoine Griezmann playing off him.

The 21-year-old Barcelona man Dembele pays the price for making little impact in France's stuttering 2-1 victory over Australia in their opener.

Tottenham Hotspur and France captain Hugo Lloris will win his 100th cap for his country in Yekaterinburg, the most eastern city at the World Cup.

Lloris, along with the skippers of Denmark and Australia, backed Peru talisman Paolo Guerrero in calling for his drugs ban to be overturned for the World Cup.

Peru's all-time leading goalscorer and captain was surprisingly on the bench for Peru's opening game, coming on in the second half, but the South Americans went down 1-0 to Denmark.

The 34-year-old Guerrero will face Lloris from the start after Peru coach Ricardo Gareca chose him in his starting XI in place of Jefferson Farfan.

Peru are competing in their first World Cup since 1982.

He used to flirt with them, offer them a ride home in his police car, and then brutally murder them. Knives, axes, and screwdrivers were the equipments he used to inflict fatal injuries on his victims before horribly raping their lifeless bodies