The Indian men’s singles camp exceeded expectations last year by taking the badminton world by storm following a series of impressive results on the international stage. Apart from Kidambi Srikanth’s Superseries success and B Sai Praneeth’s incredible run, it was HS Prannoy’s giant-killing spree caught the eyes of many. The Kerala-born shuttler won the US Open Grand Prix Gold title, entered his maiden Superseries semi-final at the Indonesia Superseries Premier and also became the first Indian to beat the legendary trio of Lee Chong Wei, Lin Dan and Chen Long. 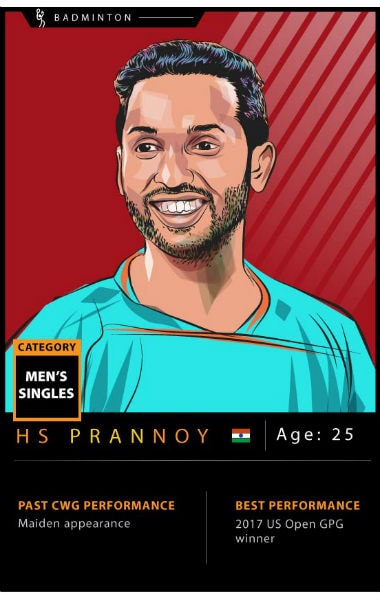 By the end of November, Prannoy had amassed enough points to enter the top-10 of the men’s singles for the first time in his career. The 25-year-old’s attacking prowess and classy backhand proved to be a handful for his opponents. Come April at the Commonwealth Games in Gold Coast, Prannoy has a chance to prove his mettle at a major tournament and especially the CWG where Indians have managed to bag a medal or two in the previous editions.

Prannoy took to sports quite early and had the backing of his father Sunil Kumar, who himself was a fan of the racquet sport. The first spark in Prannoy was seen by Kumar, a former All India Air Force champion and a self-taught coach, who also trained Prannoy till the age of 16.

However, Kumar faced a slew of questions by local coaches as they thought that his son was too slow for the singles discipline. Meanwhile, the lanky shuttler let the results do the talking as Prannoy won junior tournaments.

"I was not sure of wanting to play badminton even when I was in the 10th. I had thought I was an okay player and there were many better players than me," Prannoy told Firstpost in 2015. But, a silver at the 2010 Youth Olympics convinced him that he had the qualities to become an established shuttler. The jump from juniors to seniors looked relatively easy.

The next couple of years did not go as smooth as Kumar and his son would have expected as injuries affected his training and progress. A knee injury in 2011 before the nationals was followed by a back injury in 2012, which took more than half a year to heal. Troubled with injury problems, Kumar sent his 16-year-old son to the Pullela Gopichand Academy in Hyderabad and a small chat with the coach settled the teenager.

Since then, Prannoy started to show solid performances first at the International Challenger level tournaments and then at the GPG level. After a barren run in 2012 and 2013, Prannoy finally found his form and made semi-final appearances at the 2014 India, Bitburger and Macau Open before making it to the final of the Vietnam Open.

Interestingly, Prannoy came out victorious at the Indonesia GPG in the very next tournament as his patience paid off. The Kannur-born shuttler had proved his coaches wrong by entering the top-15 in September 2015. He went on to beat former World No 2 Jan O Jorgensen in the pre-quarters at the 2015 India Open and claimed his second GPG title at the Swiss Open in 2016.

Along with his strong netplay, Prannoy also had the strength to play long, tiring matches. Flashes of his excellent defending and strokeplay were evident at the 2017 edition of the Premier Badminton League in January, where Prannoy was unbeaten in seven matches for the Mumbai Rockets.

Prannoy's style of play from the backcourt had been compared to his idol and Olympic gold medallist Taufik Hidayat, the most high-profile protégé of Indonesian coach Mulyo Handoyo, who joined forces with Prannoy and Co in 2017. Prannoy always had Gopichand’s support but with Handoyo, he would establish himself as an explosive shuttler. He also clinched his maiden Senior Nationals crown after beating Srikanth in the final.

Despite Handoyo’s premature departure in mid-December last year, Prannoy didn’t let that affect his game. After overcoming a foot corn injury in January, he missed out on a semi-final spot at the All England Open by a whisker. The 2018 season has just started for Prannoy and his transition from a rare talent to an emerging star could help him bag a medal at Gold Coast.