The 'okay player' who is badminton world No 12: Prannoy is a star who wasn't meant to be

"He will never be able to play singles. He isn't fast, in fact, he is slow and he should shift to doubles," a coach to Indian badminton player HS Prannoy's dad Sunil Kumar.

He wasn't the only coach saying that either. Prannoy was winning in the juniors but they felt that he had reached his limit. But few reckoned that these negative comments would only strengthen his dad's resolve. 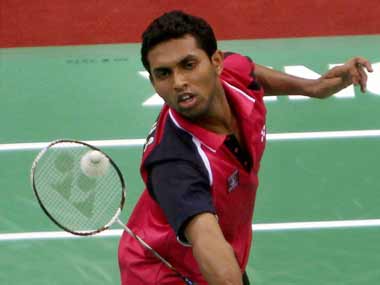 He pushed Prannoy even harder and now as World No.12, the boy from Kerala has done more than just prove his coaches wrong. The 22-year-old Prannoy isn't as well known as Kidambi Srikanth, who is also 22, or even Parupalli Kashyap. But his rapid strides have made him one to watch out for. His ability to adapt his game means that opponents haven't quite figured him out as well.

"I don't want to name the coach -- he has a lot of students now -- but I met him a few times and he kept saying that I was the only one he got wrong and he was really sorry for that," said Prannoy in a conversation with Firstpost.

Prannoy's dad was in the Air Force and even though he never played at the national level, he was the All India Air Force champion and a self-taught one at that. He would sit and watch the game, pick up tricks, come up with his own variations and make himself even better through self-analysis. None of that is easy.

So when the coaches told him that his son wouldn't be any good in singles -- he was determined to prove them wrong. He had also seen a spark -- that perhaps Prannoy himself hadn't seen in himself.

Prannoy's badminton upbringing was anything but normal. For the longest time, training meant turning up, finding an empty court and playing. Nothing scientific or specific about that. With just that level, he managed to get to the national level in juniors. His father was always around to help him along but in an age where many youngsters get specialised training -- he was a bit of an anomaly.

"I didn't believe in myself. I still don't," said Prannoy. "At times, it is really bad because sometimes I am just not sure of what I want to do next."

"I was not sure of wanting to play badminton even when I was in the 10th. I had thought I was an okay player and there were many better than me," Prannoy, who is supported by the Go Sports Foundation, added in a typically modest manner.

But it all changed in 2010 when Prannoy won a silver at the Youth Olympics.

"It was the first step for me. I was playing well and had played well at the Junior Worlds (where he won the bronze medal) and this convinced me that I had a chance. The jump to seniors is a tough one and this showing was great motivation to me."

But, of course, at no point did things just fall in place. The next two years were tougher and filled with injuries (knee injury in 2011 just before the nationals, then again in 2012 -- followed by a back injury in 2012 which took 5-7 months to recover from) but a conversation with coach Pullela Gopichand helped put him at ease.

"Gopi Sir just said that put two years aside for injuries. He said the average career will be around nine years -- 'put two years out because of injury and push yourself to the absolute limit. You are young now, injuries will happen -- there is no escaping that. Even if you get injured now, it is fine. Push when you are young,'" Prannoy said. "'Once you are older, you can take it a little easy. But now, push ahead'."

In between, while turning in solid performances at the Indian Open, Prannoy won the 2014 Indonesian Masters Grand Prix Gold. He also realised that the injuries were also a result of his inadequate training methods.

"It was tough to see others go above you but it made me realise what I needed to change as well. Earlier, my training was finding an empty court and playing. Now, I am in an academy which is probably the best in the world. You train keeping in mind specific areas of your game."

Alongwith the training, Prannoy's powers of analysis have also grown and that helps him at the senior level immensely.

"When I was in the juniors, I used to smash about 90 percent of the time. I would just attack all the time and most of the time, other players could not pick up my smashes. But at the senior levels, the smash didn't work as well. Others had worked on their defence. So I had to change.

"My game changed partly because of the injuries as well... in 2013, for example, I avoided smashing completely for the first six months. And I won a few big games as well -- I beat Taufiq Hidayat. As things stand, I am a bit of an allrounder. Still 70-80 percent attacking but my defence has improved and that helps me in a tough match; it helps me hang in and compete."

The World Championships begin on 10 August and truth be told, Prannoy isn't quite looking forward to the tournament. He is just coming off a long injury layoff (a toe injury) and hasn't even started training at full steam.

"My stamina isn't where it should be and honestly, I expect to get past the first two rounds and then it will get difficult. I know that my ranking is going to fall pretty rapidly now -- I have a lot of points to defend and given my fitness levels, that is a difficult task at hand."

But either which way, Prannoy's current ranking means that India have three players [Kidambi (no.3) and Kashyap (no.10) in the top 15 for the first time ever]. The rivalry between the three though is strangely absent.

"No matter what they tell you, we are very good friends. We eat together, we go out together, we hang out. But once we are on court, we have learnt how to switch off and just play to our absolute limit. I don't think of them as rivals but I want to beat them. The real rivals are the Chinese and the others," said Prannoy.

For now, though, Prannoy is focussing on just getting back to his best. The injury might have cost him a spot at the Rio Olympics but his goal is simple -- to get better and to win.

Surely, given the attitude, that emptiness will vanish pretty soon.