Hello and welcome to our live coverage of the Asian Games 2018. Stay tuned as we count down to the opening ceremony and bring you live updates from Jakarta.

The opening ceremony comes to an end!

The lighting of cauldron and Anggun's performance brings the Asian Games 2018 opening ceremony to an end, signalling the beginning of the tournament. From tomorrow, the Games will begin in earnest, with events like Wrestling and Shooting starting their initial rounds. 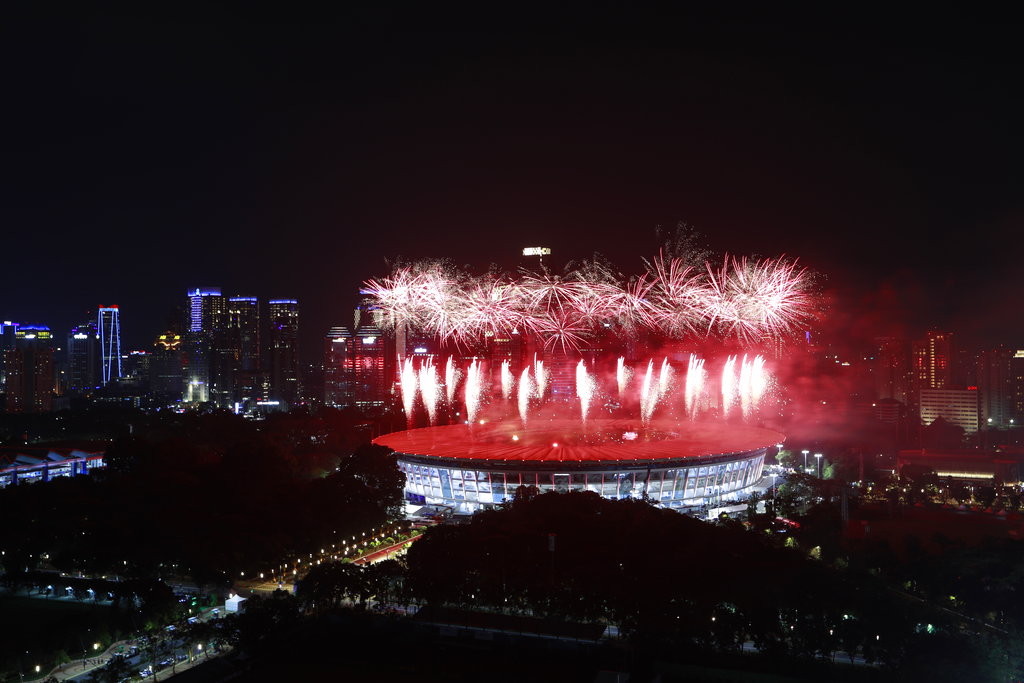 The lighting of the cauldron was followed by a soulful performance from French-Indonesian singer Anggun, who performed with a number of dancers behind her, illuminated by mesmerizing light show coloured with deep shades of purple.

The cauldron has been lit!

Six of Indonesia's former medal-winning athletes carried the torch all the way up the imposing mountainous structure of the stage, right up to the very top, where it was used to light a huge fire in a basin fashioned in the style of a volcanic crater.

The ethereal voice of Putri Ayu creates an audible hush amongst the crowd. Goosebumps all over!#OpeningCeremonyAsianGames2018 #OpeningAG2018 #AsianGames2018 pic.twitter.com/Rwxb1m2Tm5

The opening ceremony tells the story of Indonesia and its people through an enthralling mix of dance and music, told by thousands of artists in an enormous performance! 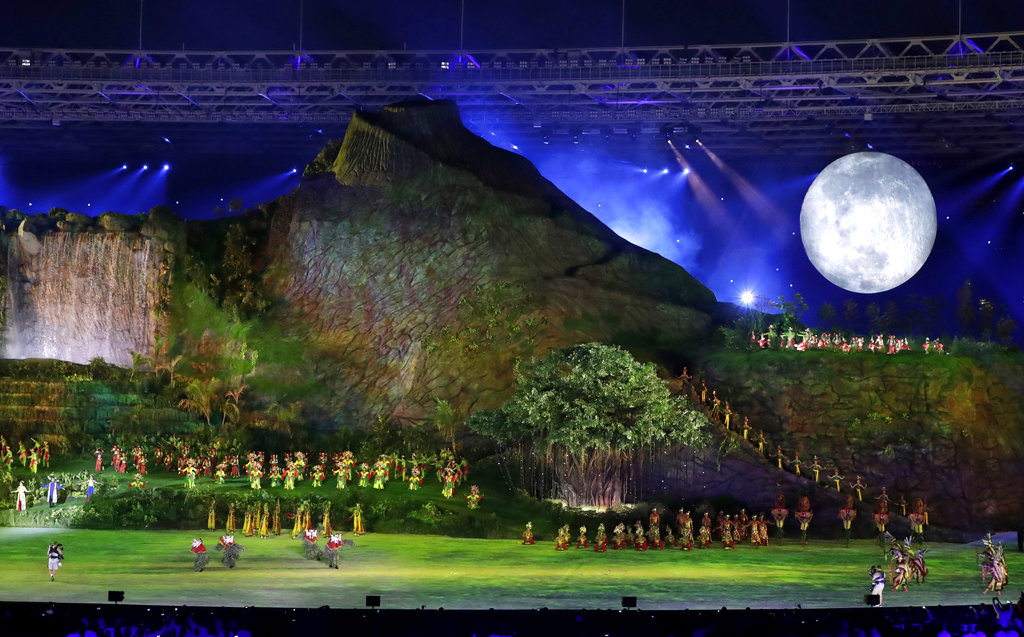 With the stadium being completely packed, thousands of people have queued up outside to watch the opening ceremony on giant television screens. The hoisting of the flags is followed by an expansive artistic re-telling of Indonesia's rich history, with troops of dancers moving in perfect rhythm to the music of Indonesia's top pop-stars. 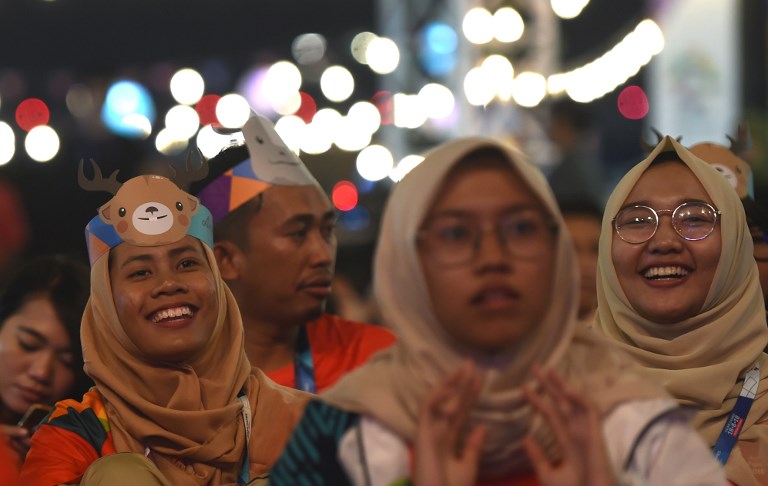 There's no lack of pyro-technics at the GBK stadium, with every part of the opening ceremony being interjected with vibrant and colourful fireworks! 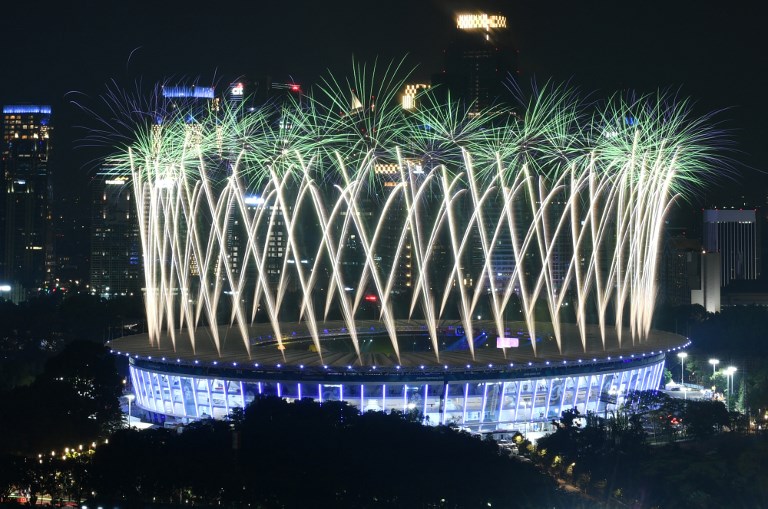 The Olympic Council of Asia's flag is hoisted!

The Council's flag was hoisted after a number of medal winning athletes dressed in military uniforms carried the flag to the pole. 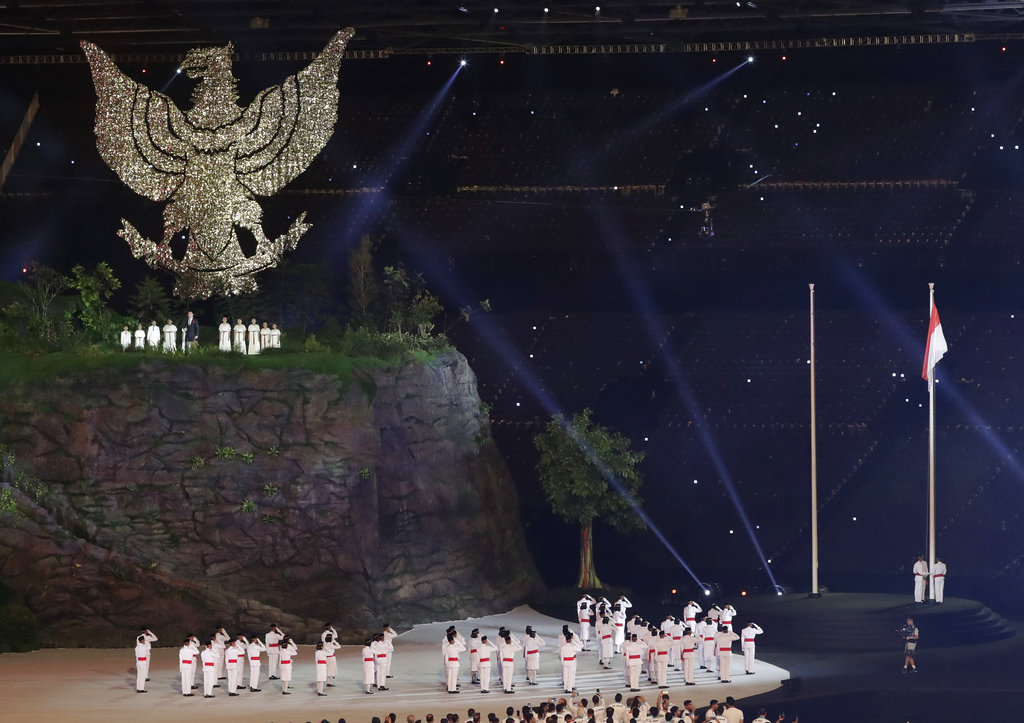 The Asian Games are officially open for business!

President Joko Widodo and vice president Jusuf Kalla open the games with a speech about Indonesia and the spirit of the Asian Games. Widodo also mentioned the fact that this is the first occasion on which the event will be held in two cities, namely Jakarta and Palembang. 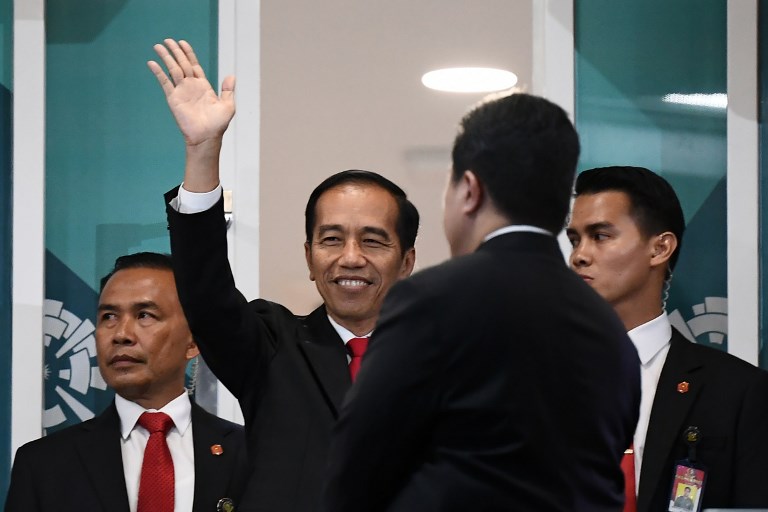 After a chaotic and sometimes controversial build-up, athletes from the 45 participating countries will gear up to challenge the best in the continent when the main competitions of the 18th Asian Games begin with the opening ceremony on Sunday.

The weeks and months leading up to the tournament have been dogged by worries over poor air quality, terrorism and Jakarta's notorious traffic.

But organisers insist they are ready, and 4,000 dancers and a 100-piece orchestra will get the party started in Jakarta at a ceremony which organisers say will be watched by billions of people across Asia and beyond.

The main Gelora Bung Karno stadium will be transformed into a verdant mountain, organisers say, and Indonesian celebrity singer Anggun Cipta Sasmi will take to the stage.

The Games website says the ceremony will show the world Indonesia is capable of hosting an international event — but the jury is still out.

Just a few hours before the opening on Saturday, national police chief Tito Karnavian visited the GBK stadium, telling journalists that more than 8,000 security officials would be deployed for the ceremony.

"We are giving special attention to security," he said at the arena, where more than 300 CCTV cameras with facial recognition technology have been installed.

Around 50,000 people are expected inside the stadium, Games organising committee INASGOC said Saturday, adding that tickets — which range in price from to $50-$350 — had sold out.

The ceremony will see North and South Korea march together at the Asian Games opening ceremony as one of the world's largest multi-sport competitions gets under way under a cloud of concern over security and pollution on Saturday.

The two Koreas will march behind the blue-and-white Korean Unification flag for the second time this year, after the Pyeongchang Winter Olympics — an event that heralded an unprecedented warming of ties. The North and South, still technically at war, are also joining forces in women's basketball, canoeing and rowing during the 40-sport, two-week regional Olympics.

The Indian contingent, represented by 804 athletes and officials, will aim to better their performance at the previous Asiad in Incheon, South Korea, where they finished eighth with 11 gold, 10 silver and and 36 bronze medals. Javelin thrower Neeraj Chopra will lead the Indian contingent at the opening ceremony of the Asian Games.

The 20-year-old has top class credentials by virtue of being the first Indian to win a gold medal at a World Championships. This came courtesy of his victory at the 2016 World Youth Championships.