RSS rally in Guwahati updates: Sangh's strength is not to scare anyone, it is for social causes, Mohan Bhagwat says

The RSS is going to hold a mega rally on Sunday in Guwahati, where more than 33,000 of its members in Sangh uniform will perform yoga

Tribal kings from Nagaland, Meghalaya and Tripura on stage

Karyakartas strike a pose in front of the stage

Saikia says, 'Hindutva being a culture and not just a religion.'

"If anyone can save Assam right now, it is the RSS,' says BJP MP Shiladitya Dev

"If anyone can save Assam right now, it is the RSS. It is a national, cultural organisation that has the discipline to conduct a congregation of this massive scale. I invite all opposition parties and groups to come and see what the RSS really is," Dev said.

"There are no traffic jams in Guhawati. In the last 15 days, we have coordinated with the authorities to manage the traffic in city. We are totally prepared for the event now. The event is also beginning slowly. We feel that ther number may even cross 40,000 now," RSS Assam spokesperson Sankar Das told Firstpost.

Many prominent leaders to be part of event

Eminent politicians, heads of village bodies, 20 titular tribal kings — from the Karbi, Naga, Khasi, Hajong, Tiwa, Garo, Jayantiya, Mising and Hajong communities — and more than 10 chiefs of different satras of Assam will be among the dignitaries attending the rally. (Satras stand for institutional centres associated with Vaishnavism, a sect in Hinduism)

RSS has taken up initiative to secure Hindu culture

King of Mayong, a village near Guwahati that is known for black magic and sorcery, Tarani Singha says, "RSS and its affiliates have taken up the initiative to secure the Hindu culture. Hindutva should be protected, and that is why I came here to understand more about their mission and vision"

Kamakhya Prasad Tasa, BJP MP said, "Very impressed with the preparations for the event. An event of this scale has never happened before here, and I doubt it will happen again. It is high time the concept of Hinduism is reinforced in Hindustan."

The itinerary for the day

All bigwigs of RSS likely to attend rally

Sunday's rally, being organised in coordination with Luitporiya Hindu Sammelan, is an ambitious programme which was being planned since two years. RSS chief Mohan Bhagwat and senior leaders such as joint general secretary V Bhagaiah, Krishna Gopal Sharma and Dattatreya Hosabole will speak at the rally. Other national leaders such as Akhil Bharatiya Sharirik Pramukh in-charge Sunil Kulkarni and Saha Sampark Pramukh (public relations chief) Sunil Deshpandey will also be present. The programme is scheduled to begin with the 35,000-strong volunteer force singing 'Ami Luit Poriya Hindu' (we're Hindus of Brahmaputra valley).

RSS volunteers have begun to gather in Guwahati

In the video, one can hear in the background: "RSS karyakartas from both sides of brahmaputra river have assembled together. We wish to conduct our service sincerely and dedicatedly with order and discipline."

Swayamsevaks are also being asked to refrain from using mobile phones until the end of the ceremony in Guwahati.

The heat forcing many to bury their faces!

Women volunteers gearing up for event

RSS volunteers outside the venue

Visual from the RSS rally in Guwahati

About 35,000 swayamsevaks (volunteers) from across the North East will converge in Guwahati for the programme. It's for the first time that the Hindu nationalist body is organising an event of this magnitude in the North East. Since 1994, the region has seen RSS gatherings in smaller cities like Dibrugarh and Shillong, but these never witnessed crowds of over 3,000 to 4,000.

The RSS became operational in the country's North East in the mid-1940s when it set up its first base in undivided Assam, which then comprised the present-day states of Mizoram, Nagaland and Meghalaya. For administrative purposes, the Sangh's northeastern arm is divided into two parts: Arunachal Pradesh and Manipur, along with the southern parts of Assam, fall under the Dakshin Assam division. Northern parts of the state, along with Meghalaya and Nagaland, make up the Uttar Assam division.

Khanapara ground venue in the morning

Khagen Saikia, a senior RSS volunteer, behind the desk, was busy asking his colleagues if they had had their lunch, aside from responding to various queries. When asked about the kind of attendance expected on Sunday, Saikia said they were expecting over one lakh people in total. Das later confirmed that the number was actually closer to 75,000 with around 35,000 RSS karyakartas in uniform and 40,000 people as part of the audience.

Cartons filled with food packets collected from residents in the neighborhood

It is to be noted that Chakravarty been an RSS member for 53 years.

Guwahati students have been posted on duty as Swayamsevaks at the Khanapara ground.

Security tightened across the venue ahead of rally

RSS rally ahead of elections in North Eastern states

Preparations underway at the venue

The RSS is going to hold a mega rally on Sunday in Guwahati, where more than 33,000 of its members in Sangh uniform will perform yoga, it publicity incharge said on Friday. The rally will be addressed by Rashtriya Swayamsevak Sangh chief Mohan Bhagwat.

Visual from the RSS rally in Guwahati

Visual from the #RSS rally in #Guwahati

"Sangh's strength is not to scare anyone or dominate anybody, it is for social causes," Mohan Bhagwat says

"The Sangh's strength is not to scare anyone or dominate anybody, it is for social causes. Don't just remain a spectator, as a sympathiser, learn to come down and learn the culture of the Sangh. Mothers and sisters need to send their sons to the Sangh's shakhas and teach them our vision," Mohan Bhagwat says as he ends his speech.

"India forgot its enmity with Pakistan, but Pakistan did not forget," says Mohan Bhagwat.

"Accept and respect all diversity. This is how humanity in this lifetime is accomplished. We have this uniqueness of diversity gifted to us by our motherland," Mohan Bhagwat reiterated at the Guwahati rally. "Sujala suphala malayajashitala..." was how abundant out motherland was, this made us open and broadminded which led us to welcome more and more people...Nature protected us and blessed us with this abundance," he added. 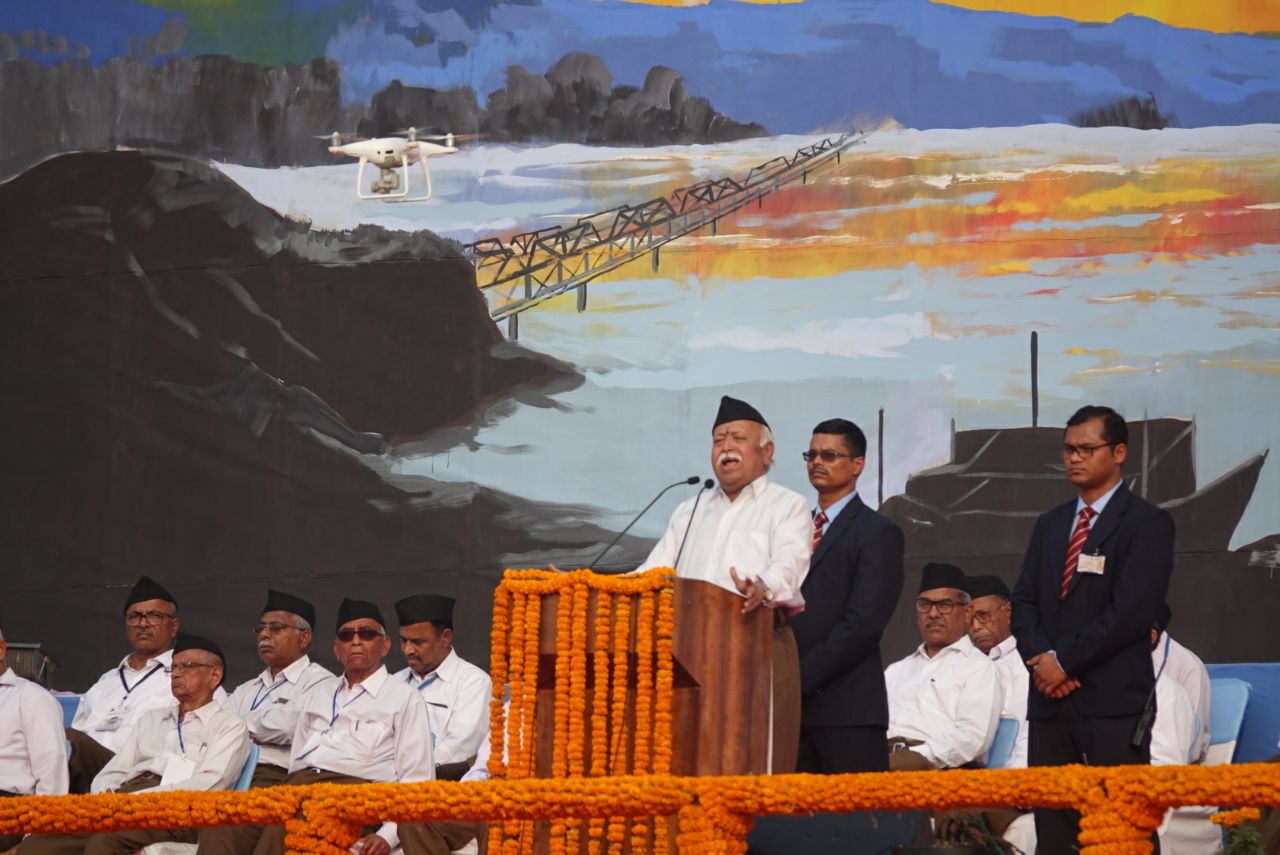 "Our uniqueness lies in diversity or religion and different ways of life...but at the core, our essence is all same. We need to seek happiness within, even the illiterate people in India are wise enough to know this truth that many in the world fails to understand," The RSS chief said at the rally. "There is diversity in the world, respect it and then do darshan of this unity in diversity.. then only will your life be fruitful," he added, advocating the need for unity. 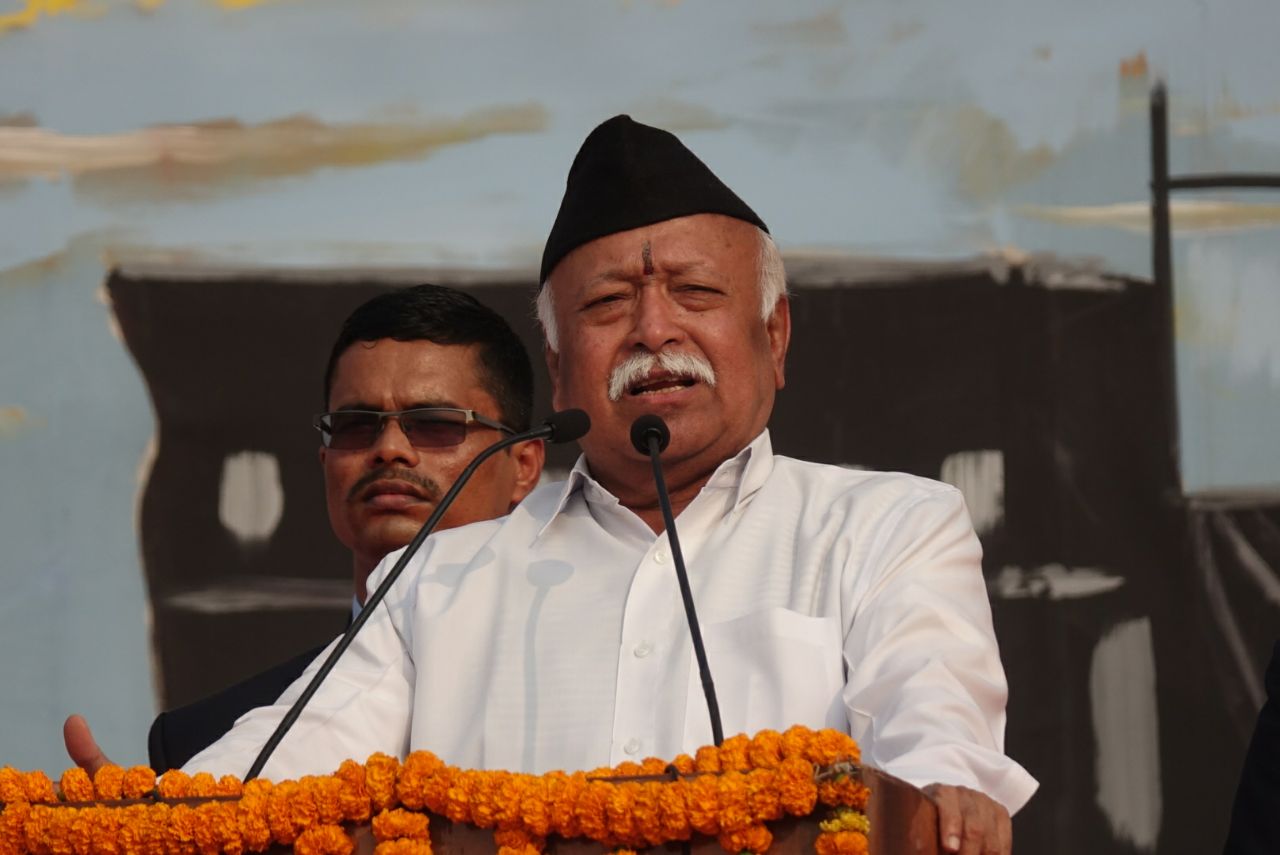 The audience listens to RSS chief Mohan Bhagwat with rapt attention as he begins his speech in Hindi to welcome everyone present at the rally.

Struggling world is looking at India for a path towards world peace, Mohan Bhagwat says

"To bring our country back on its feet is the goal of RSS. It is not a selfish or parochial motive. There is a need for it. Around the world, humanity has for the past 2,000 years, tried many things for world peace, But they have failed. They need a new route and India will provide that new path for the people. India has been doing so since millenniums," RSS chief Mohan Bhagwat said at the RSS rally in Guwahati.

"As a nation state, we have the right to give enlightenment for struggling world. The time is ripe for it. It may seem difficult and impossible for some, but with efforts and self-discipline, we can achieve these goals," he added.

Invoking Lachit Borphukan, Umesh Chakraborty says we must protect the soil of Assam and the North East to "save" the region. He asks every citizen to go back to their village once in a while and make sure there is equitable development. 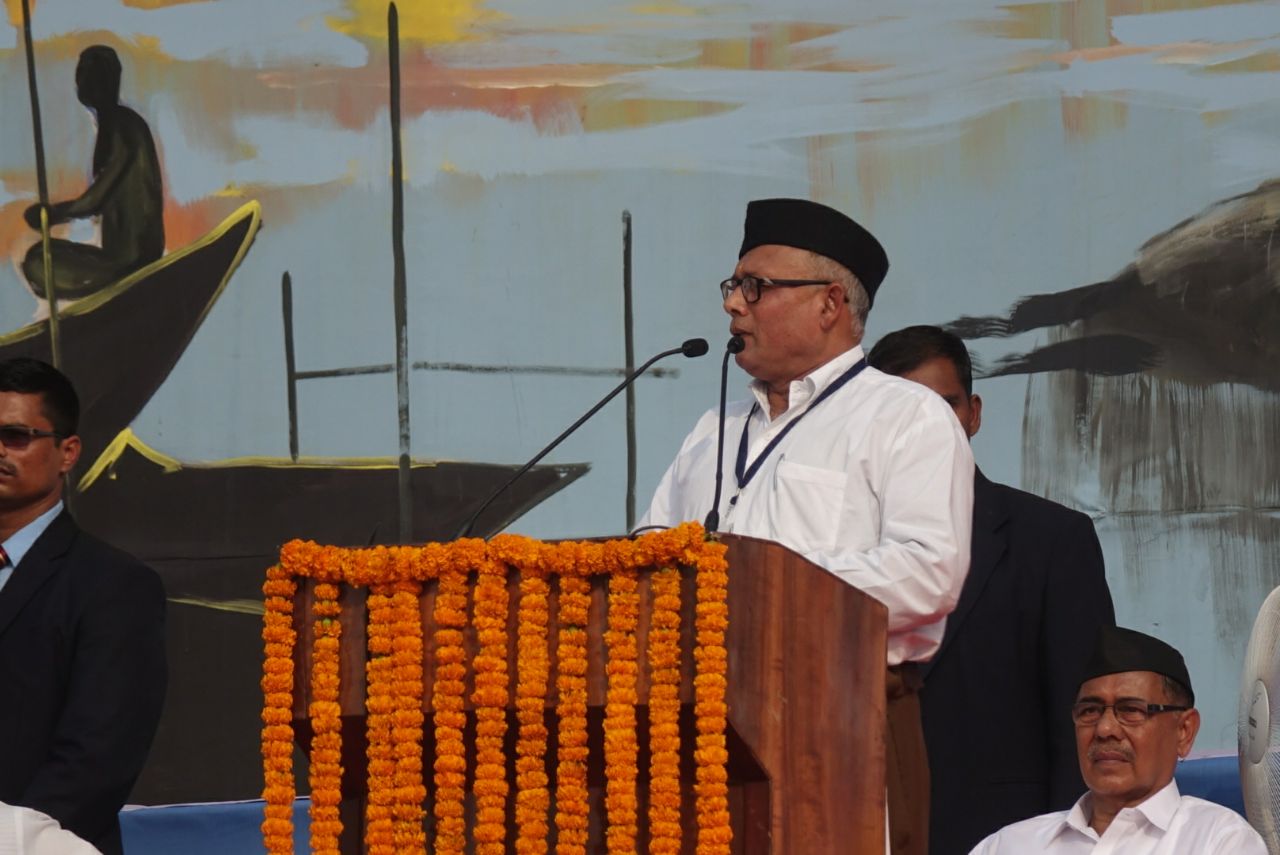 Latest updates: RSS chief Mohan Bhagwat has arrived on the stage. After saluting the swayamsevaks, the volunteers began their yoga exercise.  Before his address to the gathering, the Assam unit head Uttam Chakraborty is speaking.

The rally at Khanapara ground has begun with the organisers welcoming leaders from the tribal community in North East region. Not just tribal leaders but people from various fields in Assam have gathered at the venue. Speaking to media, BJP MP Shiladitya Dev said that only RSS can save Assam. On the other hand, veteran actor Pranjal Saikia called Hindutva a "way of life."

Speaking to Firstpost, Assam RSS spokesperson Sankar Das had said that the preparations for the mega event are complete and added that the outfit expects over 40,000 participants on Sunday. The rally is expected to go on for at least two to three hours on Sunday. The volunteers gathered at the ground are likely to sing the song 'Luitporia Hindu ami' (We are Hindus of Brahmaputra). RSS swayamsevaks as well as women volunteers have begun to arrive at the Khanapara ground in Guwahati. Final rehearsals are being conducted before RSS Sanghsarchalak Mohan Bhagwat arrives at around 1 pm.

It is for the first time that the RSS will be holding such a big rally in the North East. According to latest reports at least 35,000 volunteers are expected to be at the venue on Sunday. Security has been tightened across the venue ahead of the rally. Preparations for food and water are in full swing while more than 50 women volunteers worked on rangoli to welcome Rashtriya Swayamsevak Sangh chief Mohan Bhagwat and other leaders.

The RSS will be holding a mega rally on Sunday in Guwahati, where more than 33,000 of its members will be hearing the address by Rashtriya Swayamsevak Sangh chief Mohan Bhagwat.

The Assam unit of the RSS includes some districts of Assam, the entire Nagaland and Meghalaya.

The 'Luitporia Hindu Samabesh' is being organised ahead of the 27 February Assembly elections in Nagaland and Meghalaya.

The BJP is aiming to make further inroads into the northeast after having formed governments in Assam and Arunachal Pradesh.

"A mega public rally of the RSS's Assam unit will be organised on 21 January in Guwahati. The meeting is expected to be attended by more than one lakh people, including over 33,000 Sangh workers," the Sangh's Assam publicity incharge Shankar Das told PTI.

Das said over 20,000 families from across the three states have decided to provide five food packets each for distribution during the rally.