Article 370 revoked: Farooq Abdullah asserts he was put under house arrest, claims he 'broke the door' to address media

Srinagar: National Conference chief Farooq Abdullah asserted on Tuesday that he was put under house arrest and in an emotional outburst asked if the government after dividing Jammu and Kashmir, 'will divide hearts too'. 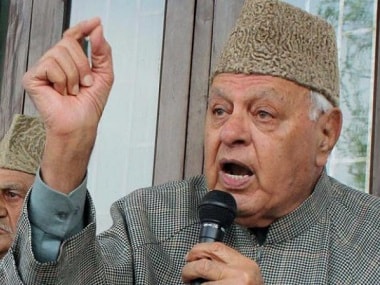 In his first remarks since the government on Monday revoked provisions of Article 370 to take away state's special status, and proposed that the state be bifurcated into the Union territories of Jammu and Kashmir, and Ladakh, Abdullah said a "dictatorial" authority has been invoked and not a "democratic" one.

Talking to TV channels in Srinagar, Abdullah contested Home Minister Amit Shah's assertion in Parliament that he was neither under detention nor arrest and was at his home of his own will. The former Jammu and Kashmir chief minister said he "broke the door" to come out and speak to the media.

"I heard the statement of the home minister of India that Farooq Abdullah is free and is staying in the house out of his own will. I thought how can he be lying when a DSP has been placed outside my house and no one can come in and no one can go out", he told Times Now TV channel.

Responding to NCP's Supriya Sule in Lok Sabha, Union home minister Amit Shah said,"he (Abdullah) is neither under detention nor under arrest. He is at his home on his own will". When Sule wondered whether the National Conference leader was unwell, Shah said it was up to the doctors to say. "I cannot carry out the treatment, it was up to doctors," he said.

Abdullah broke down while speaking to NDTV about the government's decision and said,"they divided regions, will they divide hearts too? Will they divide Hindus and Muslims? I thought my India was for all, everyone who believes in secular, unity". "For 70 years we have fought the battle and today we are supposed to be the culprits", he said. The Articles 370 and 35A were guaranteed by the government of India, he asserted.

"Dictatorial authority has been invoked and not a democratic authority that we thought they will invoke. I do not know how many have been arrested. Nobody is allowed to come in or go out, we are under house arrest", he said.

Abdullah, 81, said he knows only of his son Omar Abdullah and another former chief minister's arrest that too through the media. "There is no written order but we have been placed under house arrest. We believe in law, we are not stone pelters or killers. We have never used the path of gun. We have always used Mahatma Gandhi's way...Why was this done? What was the need", he said. "If it (the developments in J&K) is going according to the Constitution, why the home minister could not wait when the matter is with the Supreme Court of India. Article 370 is not a presidential order, it is a constitutional guarantee", Abdullah said.