Where are the women in Chennai?

Centuries of women’s movements have secured for women the right to vote, right to education, right to participate in workforce and several other rights that enable them to come out of their circles and claim equal participation in public life. However, we have not addressed the question ‘Who legitimately owns the public domain?’, neither has the gender-based segregation of spaces as public(masculine) and private(feminine) been challenged.

In the third part of the gender and public space series, we explore the streets of Chennai.

In early 2017, massive protests broke out all over Tamil Nadu against the Madras High Court ban on the bull-taming sport Jallikattu. One such protests saw thousands of young women and men from Chennai’s urban elite class gather at the Marina Beach to extend support to a sport, which is essentially rural. Chennai’s youth were applauded for standing up for their culture, and also for their disciplined behavior towards women. Chennai women proudly shared that they felt safe even at late night in the Marina Beach among thousands of men.

This stirred up curiosity within the author: would Chennai’s women be equally safe if they were to visit Marina Beach alone at night, maybe for a stroll by the sea, and not to defend an aspect of the hyper-masculine cultural identity?

The author's local sources in Chennai suggested that it would not be equally safe. As a matter of fact, media reports suggested that parents allowing girls to go out at night or stay the whole night at the beach were earlier unheard of; Jallikattu protests perhaps brought a cultural revolution in Chennai overnight.

For the gender and public space series shoot in Chennai, I chose Marina beach as the first location to find out the reality behind the change in narrative; how women accessed the beach on an ordinary, peaceful day. In addition, the author also visited the Nungambakkam High Road, which is a office and commercial area in Chennai.

During my research on women’s safety in Chennai, I came across a study by Chennai-based non-profit organisation AWARE, reported by The Hindu, that suggested 71% of women feel unsafe while taking public transport.

To gather first-hand experience, I took multiple rides on the MTC bus through the city and photographed the major bus terminus. I also visited one of Chennai’s most important trade and commerce center, the Parry's Corner in George Town. 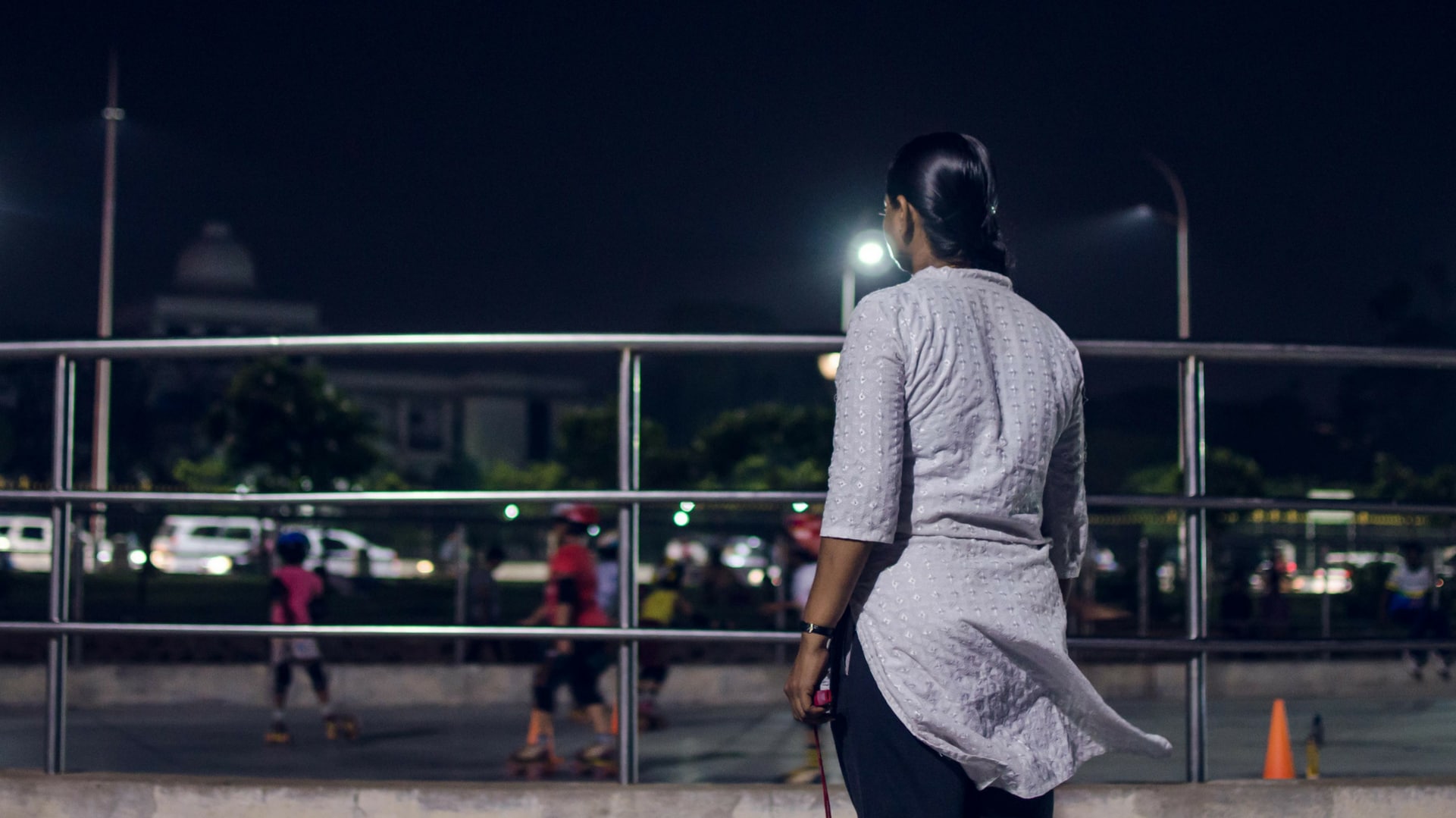 My overall observation in Chennai was that women indeed have a prominent presence in public spaces, owing to the fact that female workforce participation in Chennai is higher than Delhi, Mumbai and Kolkata. There is also a large participation of women in the city’s trade and business; by their sheer presence, women are reclaiming the public spaces and giving a sense of safety to other women.

Even at night, the Marina Beach too had a good presence of women, though they were tagging along with family or with their partners. 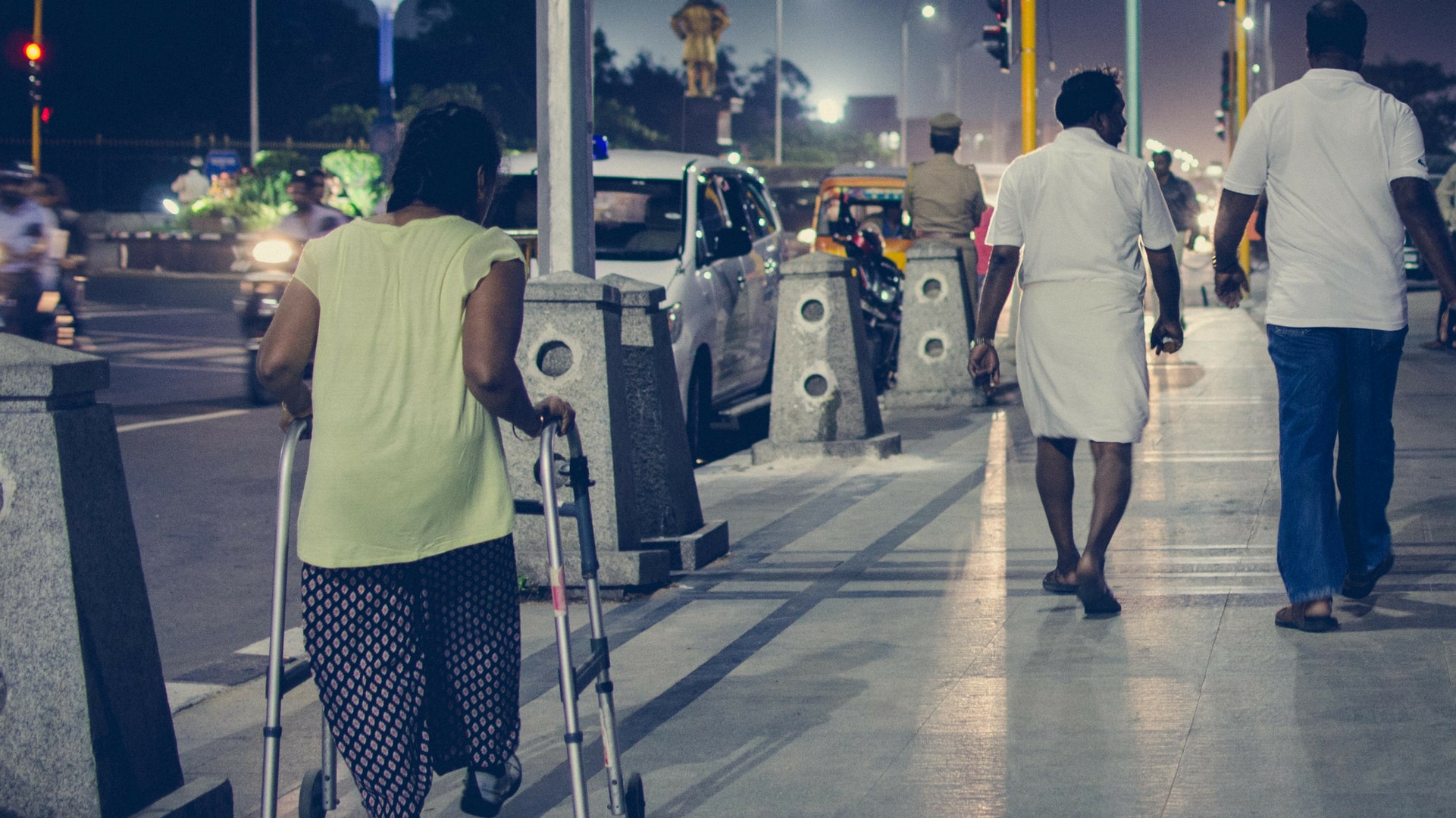 Approaching the beach, I saw middle-aged and disabled women, sitting or taking a walk. In Chennai, one of important observations I made was that more middle-age and elderly women access public spaces, as opposed to the other metro cities where I found more younger women in public. Once I reached the main beach area closer to the sea, it was late in the evening, and the only people I could spot were in couples.

As mentioned before, women have a large participation in Chennai’s trade and commerce, local food shops even at the dark corners of the beach were being run by women which gave the space a sense of safety. This is a fresh break from other cities, where most street vendors are men. The bus terminus near Chennai High Court was a very busy and crowded spot, with a impressive presence of women, both as commuters and as street vendors, selling flowers and garlands.

While I can't back my statement up with exact numbers, a good percentage of Tamil households are run by women vendors and shopkeepers, which also makes the public spaces gender balanced.

Tamil women are traditionally large-bodied and usually possess a strong body language, which adds a sense of ownership to the spaces they access. This is in sharp contrast to the constricted and reluctant body language and body image that can be observed in Delhi, and other parts of northern India. Women in professional work gear can be seen at many places in Chennai, who again add weight to the effort of reclaiming public spaces. 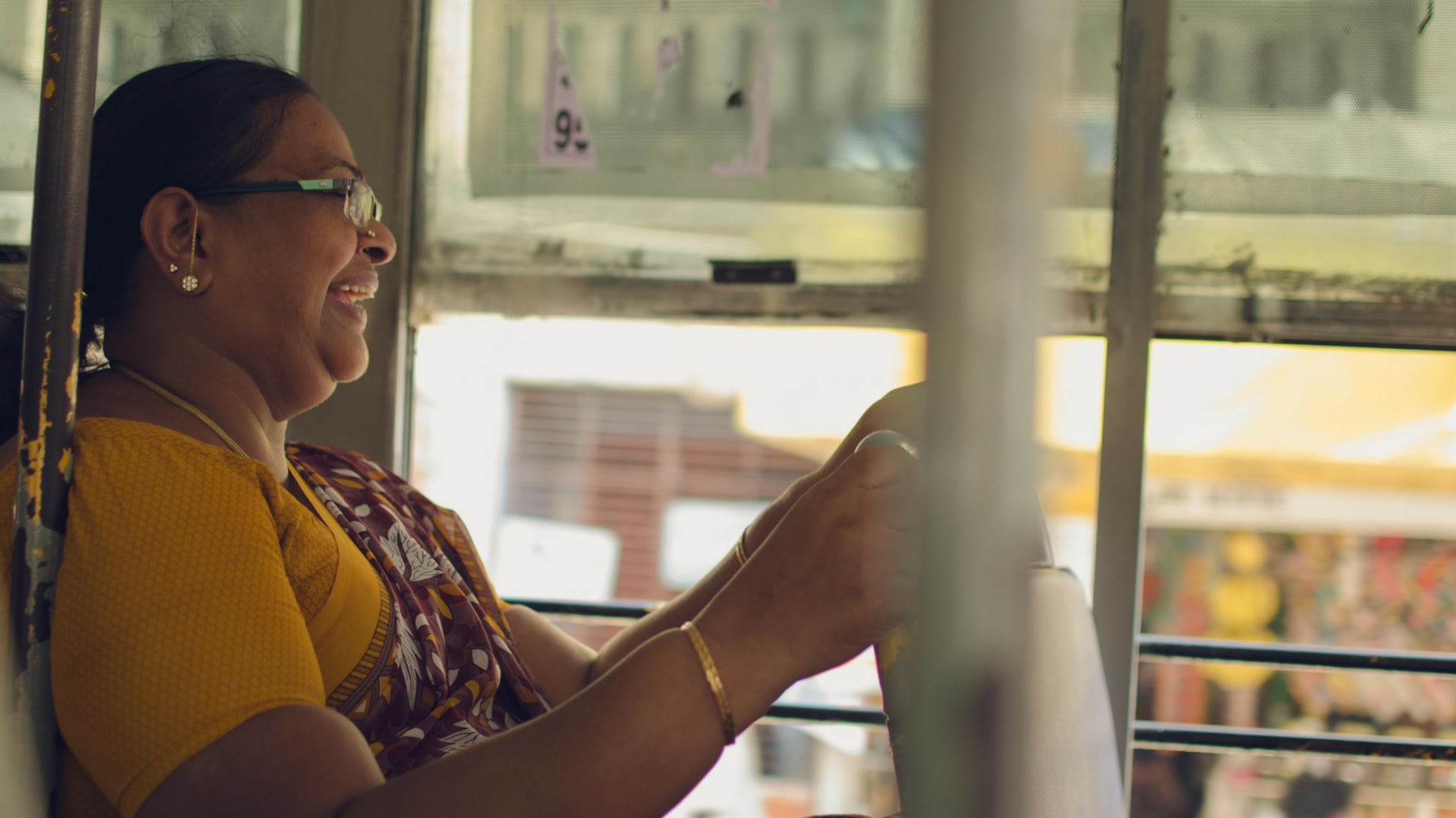 The MTC bus rides I took were to quite pleasant. However, women’s safety in public transport is a subjective matter about which no conclusive statement can be made. I can only let this picture speak. 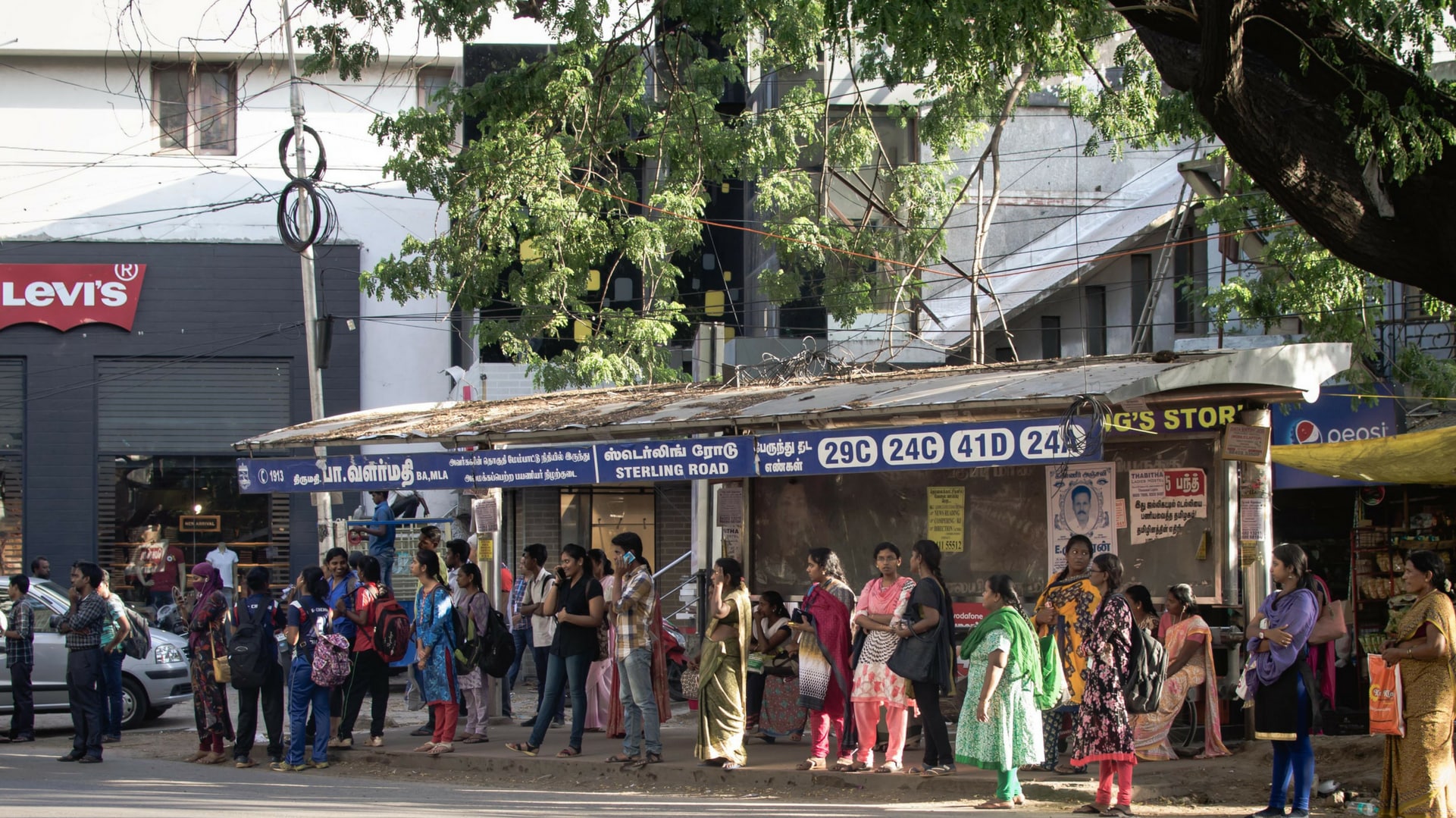 As I traversed the city, walking or taking the bus, I was surprised to see that most women chose  to wear traditional Indian clothe. Aside from the area of IT offices, very few women go for jeans or western wear. 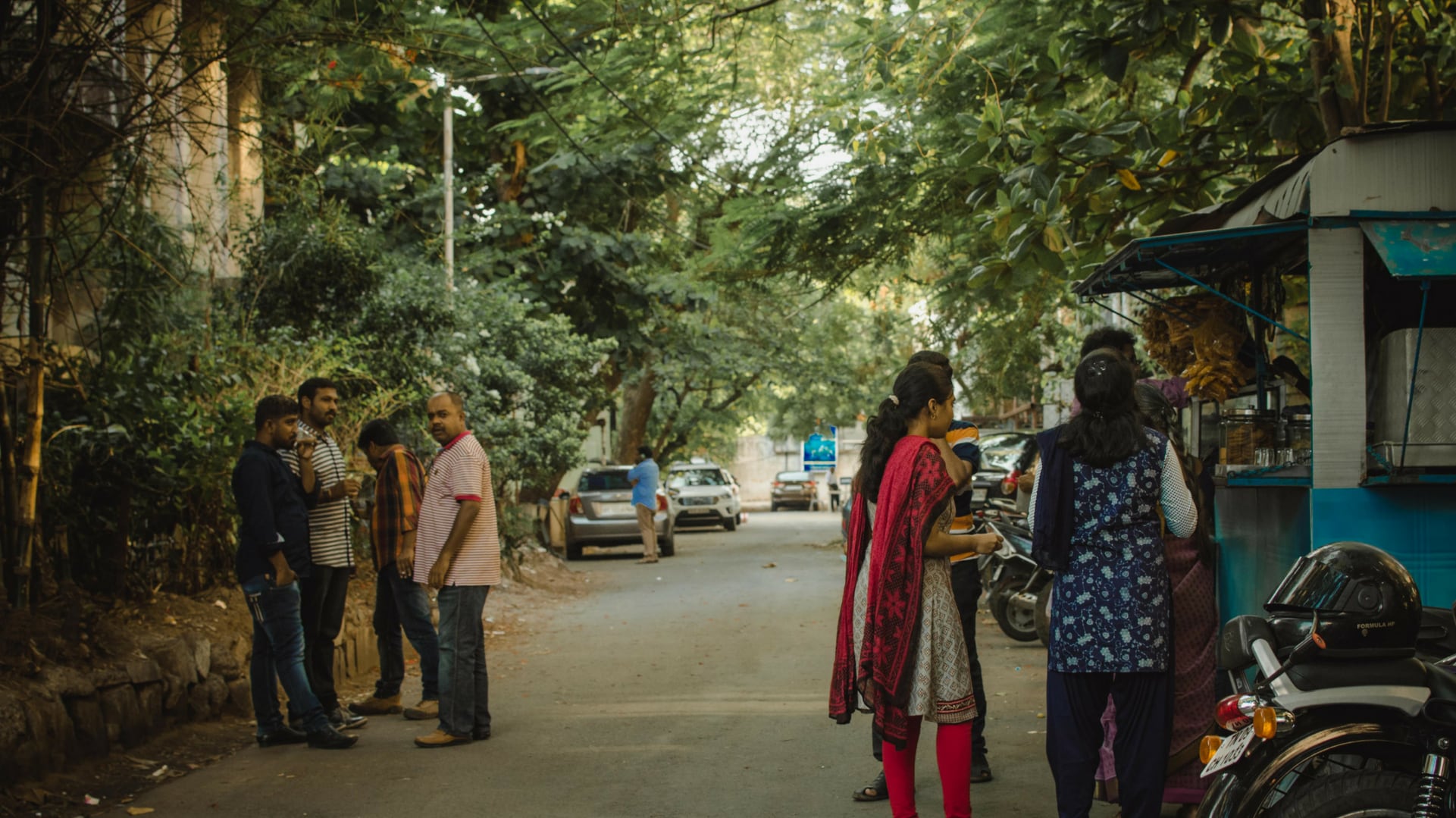 At Nungambakkam High Road, I observed working women taking a break during the lunch hour, sipping tea near a snacks stall. My final quest in the Chennai was to find whether women shopkeepers and vendors across the city merely provide their labour as salespersons, or do they also havea  decision-making role in procuring the materials from the wholesale market, an area mostly considered masculine.

Thus, the wholesale market in Parry's Corner, one of Chennai’s most congested area, had a gender balance with many women participating in the trade and commerce. However, the task of providing physical labour service as porters, carriers is taken up men. To conclude, Chennai is a city with very strong culture of its own, which is deep-rooted in the lifestyles of those who live there. At the same time, women have a large participation in the workforce, trade and commerce, providing gender-balanced cityscape.

Even though, my quest to find instances of women casually loitering remain unfulfilled in Chennai, I eagerly await my visit to Bangalore, which is the final stop in this photo series.