Abandoned by Nepal and China, the Hilsa village lives in fear of floods

Amid politicking, Nepal's largest dam project has left locals in limbo for decades

Sixty-two-year-old Parashnath Kashyap had to move home three times in two decades due to floods and erosion along the Ghaghara river in the Bahraich district of northern India’s Uttar Pradesh state. “Sir, how different our life was 20 years ago...,” said Parashnath, dragging a charpai (woven bed) under the shade of a tree behind the left embankment of the Ghaghara river in Jogapurwa — 30 kilometres west of Bahraich city.

In 2000, severe floods washed away his family’s land, so they moved about a kilometre east. The flood in 2002 forced them to move again. In 2008, they moved a kilometre away again and then stayed there behind the embankment, encroaching on some private and government land. “It’s like hide and seek; we move as the river moves,” he said.

As we walked about half a kilometre to see the large flood plains that were once farmland, he said, “For years, we have danced as the river does, but with our eyes full of tears.”

The Ghaghara – the name of the Karnali river once it reaches India – is part of the Ganga basin. The Gangetic plains of northern India are one of the most flood-affected regions in the world. About 93 million people were affected by floods in the Ganga basin between 2000 and 2014. According to a 2018 report from the International Water Management Institute, there were 326 extreme flood events in the Ganga basin between 1980 to 2015, resulting in 67,000 casualties. Of these, 212 floods were in India, 74 in Bangladesh and 40 in Nepal. China accounts for 4 percent of the basin, but there is almost no information about floods there, the report states.

The Karnali river as it flows from Tibet, through Nepal to India where it joins the Ganga After the river engulfed more land in Jogapurwa of Uttar Pradesh, the number of people living in temporary settlements has grown. This has led to a web of social problems in recent years. “People living far from the embankment (our relatives) don’t want to get their daughters to marry our boys as we live in a very vulnerable situation,” said Parashnath.

He knew that problems would worsen when he was first displaced in 2000, so he married off his daughters as early as possible while he had some money left. As he lost his land, his economic condition deteriorated. “We have land certificates but we are landless because the river is flowing over where we used to live,” he said. 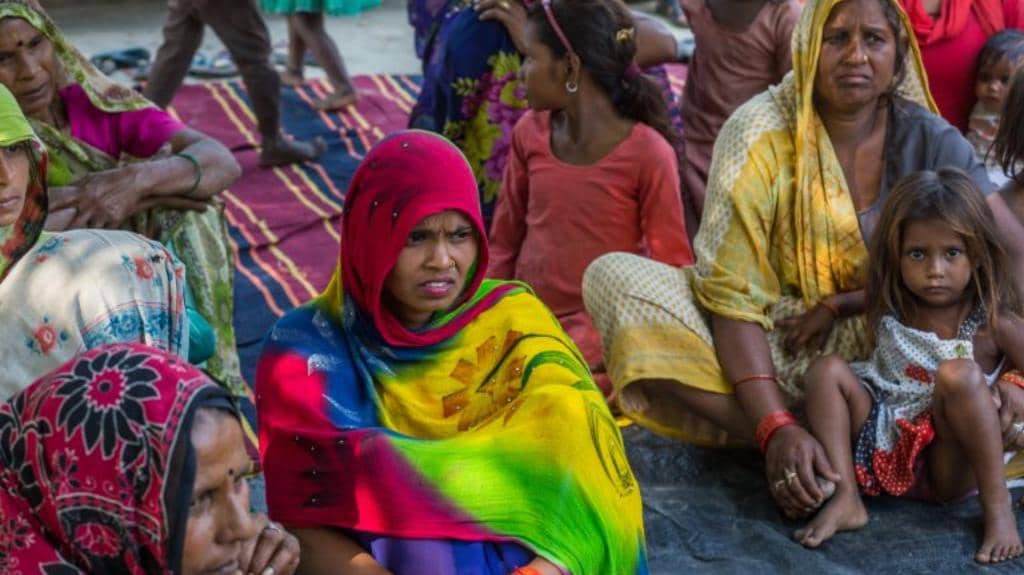 Most of the younger generation have migrated to bigger cities in Punjab or Delhi to look for work. The result of the exodus is visible. The majority of people we saw in the villages as we travelled through were women, the elderly and children. 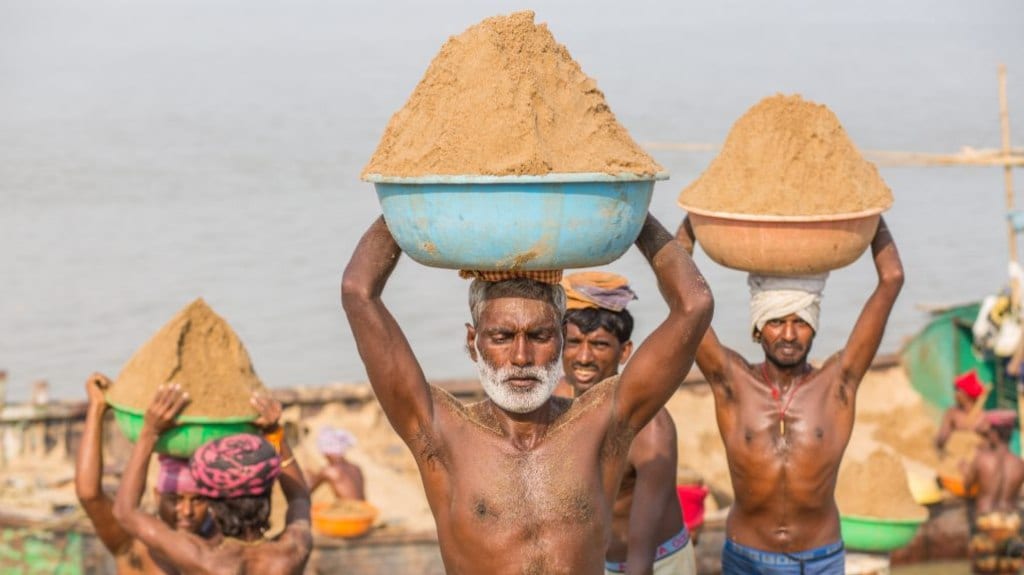 “We cultivate some vegetables on the sandy land in the dry season. You can’t imagine how big this river is in the monsoon,” said Kamlesh Kashyap, another victim of the floods. This land is far from where they live, so their vegetables are often stolen or eaten by animals. “If boys were here, they could guard the land at night, but women can’t because it’s very unsafe,” Parashnath Kashyap said.

Displaced people who move to the cities have access only to low-status and low-income jobs, like dish-washing or toilet cleaning, since very few had been to school, Kashyap explained.

The farming community has been totally devastated. As we started talking to the residents, we saw children who should have been in school.

“Most of them have to herd animals, so their parents are reluctant to send them to school,” Kashyap added. These children don’t have enough to eat either. “Parents are forced to sell most of the milk from their cows or buffaloes,” said Dhrub Kumar, director of Panchasheel Development Trust, which works with displaced communities. 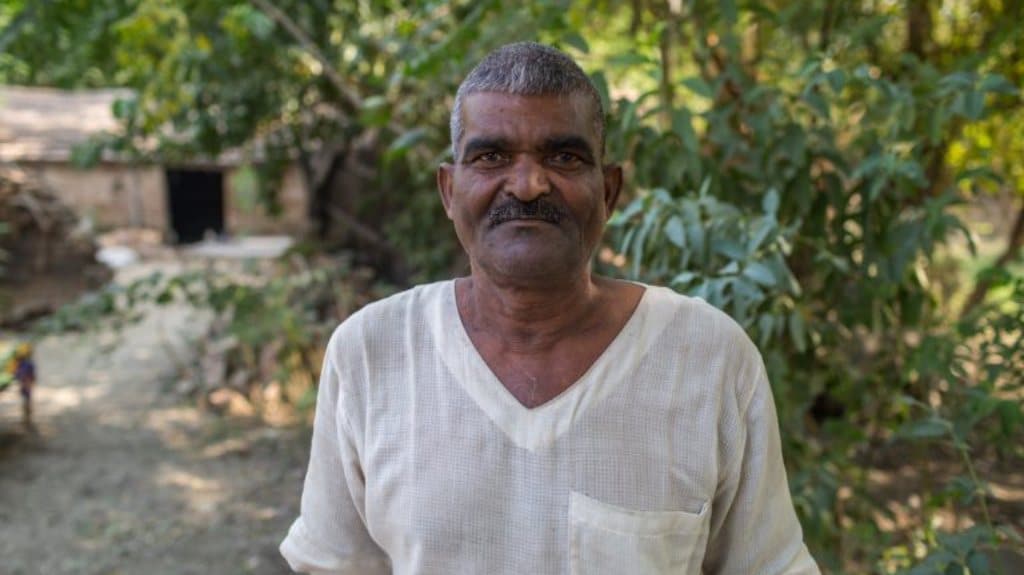 Parashnath Kashyap has been fighting for the rights of flood victims in Jogapurwa, Uttar Pradesh

The Uttar Pradesh government’s attempts to relocate displaced communities have largely failed due to a lack of understanding of their long-term needs. A decade ago, the government provided land for people in Jogapurwa to construct houses, but the land was too far away from where they farmed. “It’s about 10-15 kilometres from here and the land is just enough to build houses, so where do we keep our animals? Where do we produce food, how do we survive?” Parashnath said.

So his family decided to stay in the hope that Ghaghara would change course someday and they would get back to their land. Some people moved to the government-provided land, but later they returned to the embankment. “We are all low caste people, but the new land was dominated by higher caste people, so we were afraid we would be harassed,” said 56-year-old Chandran Bhaal.

Chandra Bhaal, a flood victim in Jogapurwa village in the Bahraich district of Uttar Pradesh state, showing the level of the flood waters that submerged his makeshift houses last monsoon 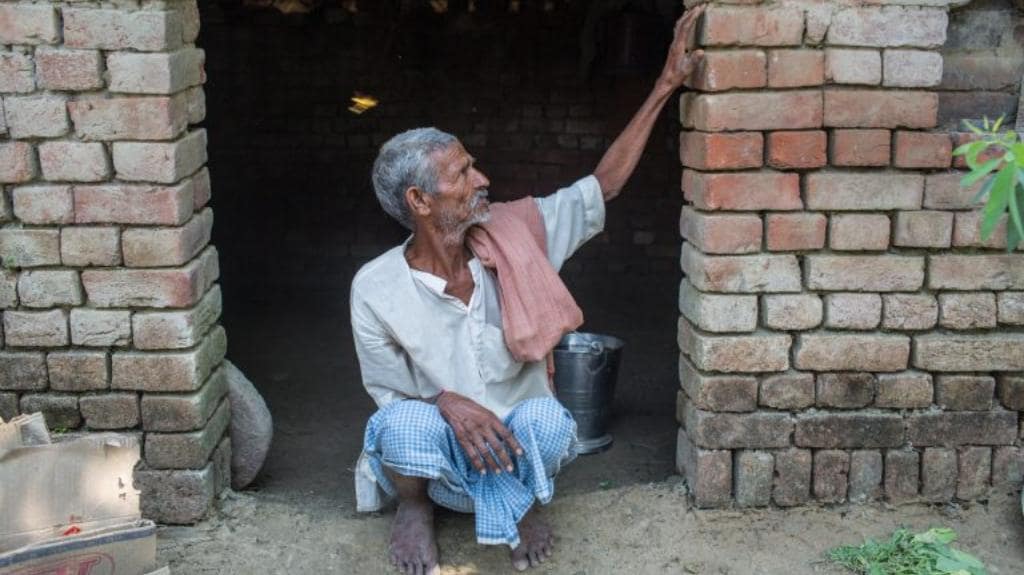 The Karnali river traverses the mountains from Tibet through Nepal and becomes the Ghaghara in Uttar Pradesh in northern India. Uttar Pradesh is one of the most flood affected states in India after Bihar, West Bengal, Assam and Orissa.

About 16 kilometres below the Nepal border in Kailali district, Girijapuri barrage was built in the late 70s to divert water for irrigation to central Uttar Pradesh, including Lucknow and Varanasi. Much of the water is diverted west to the Sharada river — another tributary of the Ganga. “We are killing this river by diverting most of the water for irrigation and leaving the downstream areas dry. More than 80 kilometres of embankments have been built along the river and more are under planning,” said Dhrub Kumar.

According to the studies, the Ghaghara started shifting course particularly after 1995. The Gangetic plains are relatively flat, and after the steep decline from the Himalayas, the rivers shift course in the plains fairly easily, especially when they swell during the monsoons. According to the National Disaster Management Authority of India, about 2.7 million hectares out of 24.1 million hectares of land in the state are affected by floods every year, with an estimated loss of more than Rs 4 billion (USD 57 million).

After the massive flood in 2000, floods have caused increasingly more damage. Debates about whether embankments are the right way to deal with floods are not new, but the problem is getting bigger, as more money has been invested in this solution over the past decades.

Karen Benette is a geo-morphologist who has spent more than 35 years studying rivers with the US Forest Service. She travelled as a member of our expedition team from Tibet to India down the Karnali/Ghaghara and argues that these structures are temporary fixes. “The government is trying to train the river to stay in one channel by putting rocks or embankments on the side. Sometimes it works for a while, but ultimately, they will fail,” Benette said. “It looks like you are doing something but when water cuts through — and it will eventually — floods will be more violent in the long run,” she added. 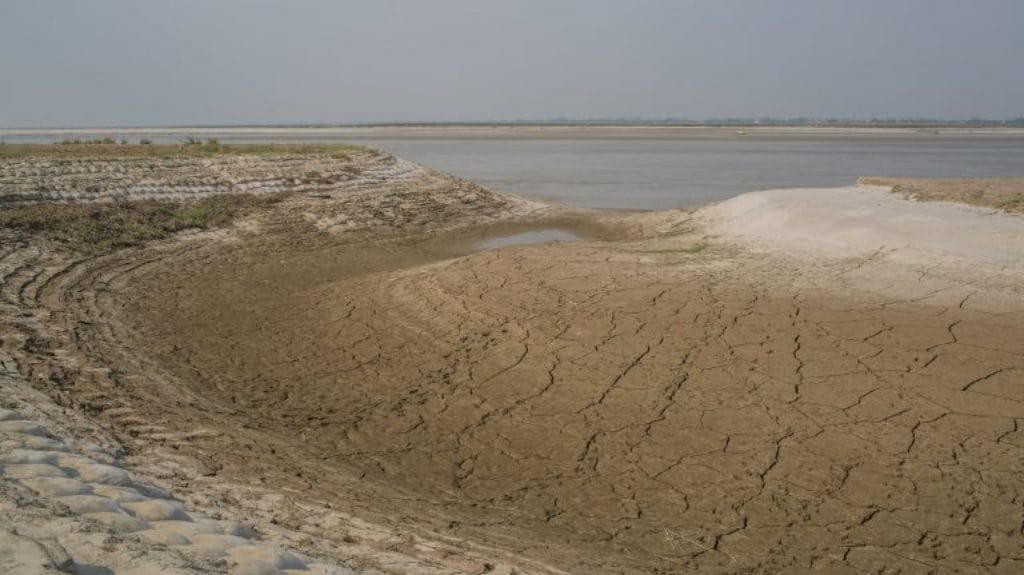 Many argue it is only the corrupt contractors, bureaucrats, technocrats and politicians who have benefited, making billions from constructing embankments despite the failure to curb the floods. “Long-term solutions are not a priority, but immediate relief and embankments have always been a priority. It clearly shows that money is the motivation behind [embankment building],” said Ajit Dixit, a journalist based in Cornelganj in Gonda district, south of Bahraich.

Governments are supposed to protect people but many say they are not moving in the right direction. “The best way is to maintain the river channels in their natural course and keep the communities away as much as possible,” Benette added. While the population is growing rapidly and land encroachments near the rivers have become a serious problem, this seems impossible. It is easy for people to settle in these areas, and this leaves them vulnerable to the inevitable floods as the choked river overflows. “If we invest the amount of money we have been investing in embankments, I think it’s possible to resettle villages in safe places. But as it is a politically motivated move, it’s not going to happen,” Dhrub Kumar said.

While the construction of embankments started during British rule, the majority were built after India’s independence in 1947. According to the World Banks’s 2014 report, about 16,200 kilometres of embankments were constructed between 1954 and 1997 in India alone, and authorities claim this has protected about 17 out of 40 million hectares of flood prone lands along the Ganga. This shows the scale of the problem.

“There isn’t one solution, but it is important to build a better understanding of rivers and planning should be done accordingly, otherwise the huge investment will be futile and [flood] threats won’t be reduced,” Benette added.

This story is jointly published by thethirdpole.net and Nepali Times.