Abandoned by Nepal and China, the Hilsa village lives in fear of floods

This is the first in a five part series on the Karnali River. Read an overview of the whole trip here.

Preparing soup for her grandson under a dim solar powered bulb, 50-year-old Pema Angmo explained how frightening life is on the bank of the Karnali river in western Nepal’s Hilsa village, on the border of Tibet. Large embankments protect the huge immigration office and villages in Tibet, but Nepalis on the other bank are left without any protection from the floods.

“I tell my relatives in Tibet that the gabion walls (as the embankments are known) protect you, but the gods protect us Nepalis,” she smiled.

About two decades ago, she started the first hotel on the flood plains of the Karnali River, which originates about 80 kilometres northwest in Tibet. Now, there are dozens of hotels. This small town is the last stop in Nepal for people visiting Mount Kailash in the Ngari province of southwestern Tibet.

Pema Angmo, a hotel owner in Hilsa. She was one of the first to start a business here two decades ago 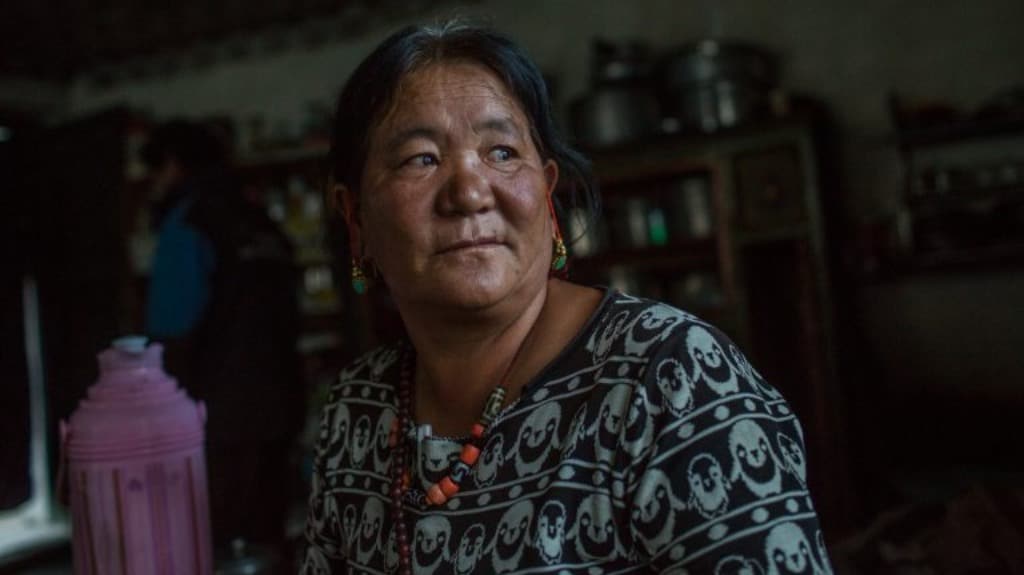 The scale of potential flood threats along the Karnali River is clear from the large embankments constructed in Burang city – 30 kilometres northwest of Hilsa in Tibet. The river, called Mapcha Khambab in Tibet, becomes the Karnali once it enters Nepal. The capital city of Burang county is a trade hub serving people from Nepal’s Humla and Darchula districts, as well as Dharchula in India. 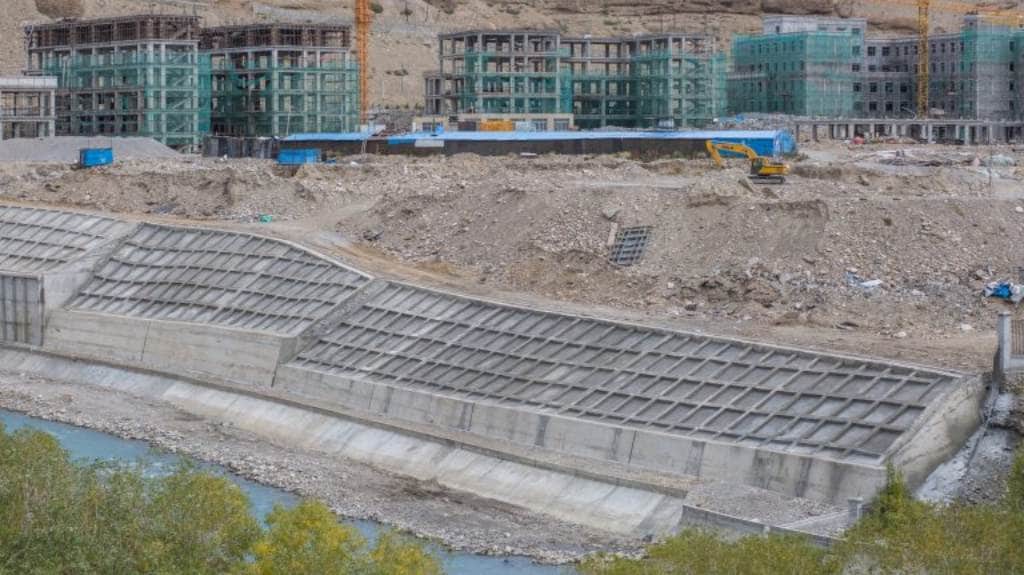 Construction in the rapidly growing city of Burang on the bank of the Karnali River. The city is the capital of Burang county and is protected by huge embankments

Different worlds across the border

Born in Tibet, Pema fell in love with a Nepali from Hepka village in Humla and they married about 30 years ago. As the years passed, Tibet saw unprecedented development, but Nepal has remained the same. Blacktopped roads built in Tibet over the last decade have made road travel much easier there. Many pilgrims — mostly from India, who in the past had to fly to Lhasa in the east and then drive west for hundreds of miles to reach Kailash — started flocking to Hilsa on small planes and helicopters from Nepalgunj in southern Nepal.

Mount Kailash is holy for Hindus who believe God Shiva once meditated there. According to the immigration office in Nepal, about 15,000 tourists go to Kailash via this route every year — equivalent to a quarter of the total population in Humla district.

The sound of helicopters wake us up every morning as they land and take off every few minutes near Pema’s hotel. Only helicopters can land at this busy airport.

While business is getting better, people are worried about how to protect their hard earned property from the floods and disasters that may come in future.

“It took two decades to build these two buildings, but it won’t take a minute to destroy them if there is a big flood or a dam bursts upstream,” Pema added.

Interview with Pema Angmo, Hilsa from thethirdpole on Vimeo.

The Chinese have built a hydropower dam a few kilometres upstream. This has improved the lives of Tibetans by bringing electricity, but increased fear among the Nepalis living next to the border. “They have built strong embankments on their side, but we have nothing. If the dam bursts, we will be swept away,” Pema said.

There is hardly any communication between the local people and the Chinese authorities. “It’s terribly hard to talk to the authorities, as they don’t listen to us. We face serious problems,” said Amar Lama, another hotelier in the town. Unfortunately, “the leaders in our capital have turned a deaf ear to problems.”

At first, the villagers in Nepal heard they would also be provided electricity. But later, the local authorities in Tibet said they would need to wait for a formal agreement between China and Nepal.

Over the last several years, locals in Hilsa have welcomed the Prime Minister and other leaders and pleaded for electricity. Two years ago, the then Prime Minister of Nepal, Pushpa Kamal Dahal, inaugurated a bridge that linked Nepal and Tibet and promised to send a team of experts to start work on a hydropower project in Nepal on a tributary of the Karnali River at a cost of NPR 30 million (USD 265,090). Two years later, there is no sign of any work starting. “Prime ministers and ministers fly here, make promises and go to Kailash with their family. Once they fly back, they forget everything. They have amnesia. I am really angry, you know, please tell them if you meet them,” Pema Angmo said as we were preparing to film her.

Out of the 77 districts of Nepal, Humla is the only district not connected to the national road network.

It also lacks electricity and a mobile network. “To go to Nepal’s capital it takes weeks if we walk, costs hundreds of dollars if we fly. Who listens to us?” she said, her frustration spilling over.

Hilsa along the Karnali river seen from the Nepal-Tibet border in Humla. Hilsa sits on the left bank and the huge immigration office on the right bank is China 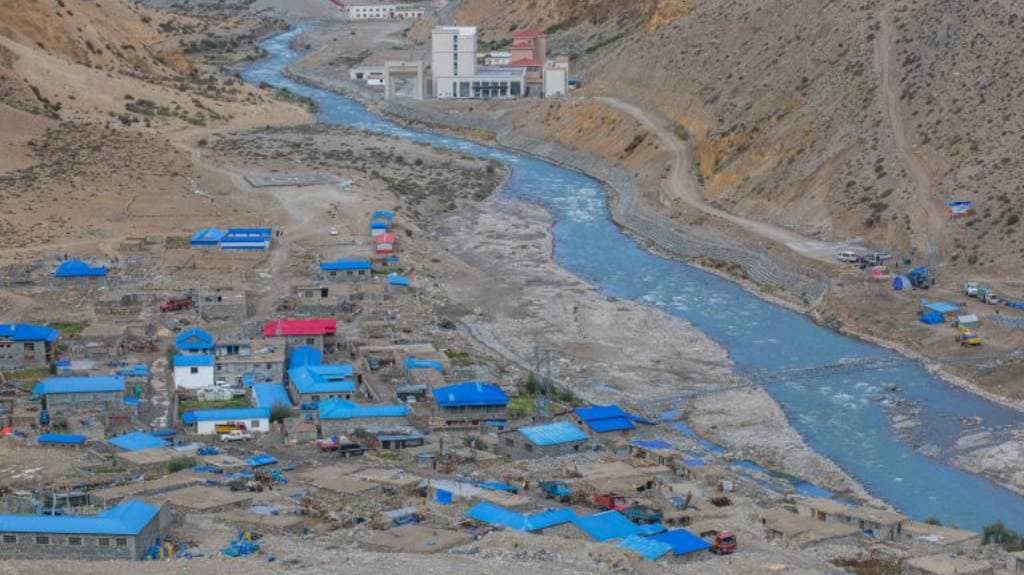 After a couple of weeks walking along the river to the south, we met Mahendra Bahadur Shahi — the Chief Minister of the Karnali province and asked him if there were any plans to address the problems people face. He had big project plans to talk about, but no answers to the problems Pema faced.

“We are talking with the Chinese to link the northern border in Hilsa to southern Nepal via a railway network,” Shahi said. “We have had a few rounds of bilateral talks in past few months.” Dreams of railways are deeply etched into the psyche of leaders, but the sad reality is that less than 100 kilometres of road connecting Hilsa to the district headquarter of Simikot, which started in late 1990s, has not been completed.

As the river's level peaks in the summer, it poses serious landslide threats. “We are trapped but we can’t leave this place as we make our living from these hotels,” Pema added.

Her hotel started with a couple of tents three decades ago. Now she has three buildings with about 50 rooms. “This is the only property we have and it’s our future, but it’s at risk,” reiterated Pema.

In 2012, a landslide killed four people from a family, including a mother and children, just a few hundred metres away from her hotel. She remembers that dark day.

“It still shakes my heart. It looks beautiful now, but the mountains are hard to live in.”

Landslides are the major cause of disasters in Nepal, accounting for about 30 percent of total annual casualties. According to Dave Petley, a landslide researcher at the University of Sheffield in Britain, there were 83 fatalities in 2017 due to landslides. Locals in Hilsa remove dry landslide rubble that has obstructed the road under construction from Simikot to Hilsa to connect Nepal with Tibet, China. Out of 77 districts of Nepal, Humla is the only district not connected to the national road network

The high losses from landslides are partly the result of the terrain and climate, he wrote in his blog recently, “but they are also largely due to poor land use, planning and construction practices. Nepal is blessed with good levels of expertise in landslides management…but it lacks political will to solve the problem.”

Apart from floods and landslides, studies warn that a mega earthquake is looming in Nepal’s western region after a big quake in the central region in 2015 killed more than 10,000 people. It’s been more than 300 years since the last mega earthquake struck western Nepal. “Seismologists say there are two dangers lurking beneath the Himalaya: one is the unfinished business of 2015, and the other is a looming mega quake in western Nepal,” a report in the Nepali Times stated a few months ago.

Naumule spring, the only source of drinking water for the people in Hilsa, Nepal This source provides water round the year and is the lifeline of the town. “If you litter around the water source, you will be cursed and swell up,” she said when we walked with her to see the source a few hundred metres from her hotel near the bank of the Karnali River.

Still shrouded in darkness, with no road connection or mobile network, the locals in the border town of Hilsa face more challenges as development upstream gathers pace. And both the Chinese and Nepali governments ignore the problems facing downstream people.

This story is jointly published by thethirdpole.net and Nepali Times.