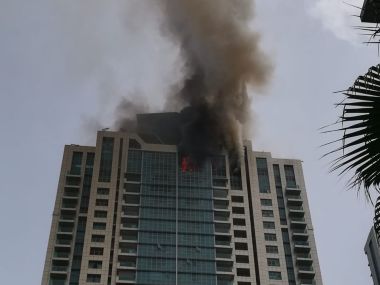 Mumbai fire Latest Updates: The firemen are facing trouble in dousing the fire because the blaze started at the top floor of the 33-floor-high sky-rise apartment building. Besides, the design of the facade of building is also creating problems because firefighters are unable to extend the ladders close enough to the building.

The fire at the Beaumonde Towers in Mumbai’s Prabhadevi  has spread to another corner. The local MLA from Shiv Sena said that the fire could not be doused because the equipment was only meant to reach the height up till the 18th floor. The MLA blamed the BMC for passing proposals for high-rise buildings, while it failed to upgrade the capacity of the Mumbai fire department.

A resident of the B-Wing, 16th floor, who requested anonymity, told Firstpost that she got to know of the fire because she heard screams from the C-Wing. B-WIng is where the fire is happening.

A major fire broke out in Beaumonde Towers in Mumbai’s Prabhadevi on Wednesday afternoon. No casualties have been reported so far. More than 90 residents were safely evacuated, fire department officials said. The fire, which broke out at around 2.15 pm was initially marked as a level-II but was soon upgraded to a Level III blaze.

At least, 10 fire tenders are present at the spot. The fire broke out on the 33rd floor of the apartment in Appasaheb Marathe Marg in Prabhadevi locality in Worli. Five jumbo water tankers, two hydraulic platforms and an ambulance is on spot, reports have said.

Reports have said that the concerned building is where actor Deepika Padukone lives. The PR team of the actor spoke to Firstpost and said, "Deepika Padukone lives on the 26th floor of Beaumonde and while the fire took place in the same wing as hers, it was on the 32nd floor. Deepika's currently out for a brand shoot. Some of her staff members are at home."

The fire reportedly broke out on the 25th floor of the apartment. More details awaited.