Panaji: The body of a young woman was found in a semi-nude state at Arambol beach in North Goa, police said today. 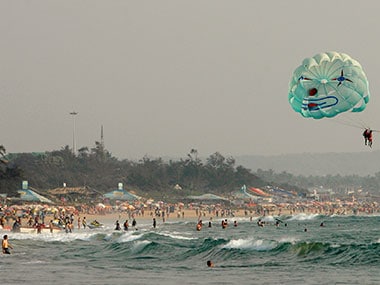 "A woman was found dead on the shore of Arambol beach last night. We have not been able to ascertain her identity. She seems to be her in early 20s. She is an Indian," Inspector Devendra Gad of Pernem Police Station said.

A case of unnatural death has been registered and investigations have been initiated, he said.

Gad said the body was found in a semi-nude state and initial investigation has revealed that the woman was seen with three boys on Thursday night on the beach after attending a party on a shack.

Police is trying to ascertain the identity of the three boys who were seen with the girl.

"There is a possibility that the girl might have gone for a bath in an inebriated condition. We have sent the body for postmortem. The cause of death is yet to be known," the officer said.