Even six years after the death of Sathya Sai Baba, hailed by his devotees as a living god or bhagwan, the once small arid hamlet of Puttaparthi in Anantapur district is still mourning. Maybe not so much over the demise of its local demi-god Sai baba, but more over the cascading negative impact of his death on the economy, trade, and loss of recognition and pride for Puttaparthi in the country. "Our town is just like Tirumala without Lord Balaji," said a local hotelier Mahabaleswar Gupta of Puttaparthi.

Vice-President M Venkaiah Naidu, who participated in the 92nd birthday celebrations of Sai baba at the Prashanti Nilayam in Puttaparthi town on 23 November, dwelt on the need to resurrect the institutions – universities, water projects, hospitals, meditation centers – set up by Sathya Sai baba in India and overseas. He urged devotees to keep the "flame of universal brotherhood and service to humanity" propounded by the godman burning. 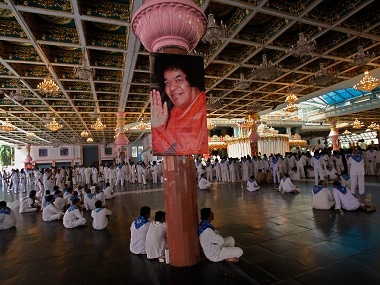 Devotees sit inside the ashram to pay their last respects to Sri Sathya Sai Baba at Puttaparti. Reuters

The death of a town

Following his death after a prolonged illness on 24 April, 2011, Puttaparthi has lost not only its spiritual charm and economic focus but also VVIP attention. The civil aviation ministry has cancelled all flights to Puttaparthi and shut down the Sri Sathya Sai Airport built for Sai baba by corporate L&T group in 1990. Only chartered flights of visiting VVIPs are allowed to land with special permission.

When Sai baba was alive, a regular flow of 25,000-30,000 foreign and several lakh Indian devotees came annually to the Sai baba ashram at Puttaparthi to pay homage to him. And, on his birthdays, special conferences and conventions were organised to highlight the event. However, the controversies after his death and the fight for control among the trust and family members has led to a reduced devotee flow. Not more than 3,000-4,000 foreigners and a few thousand Indians visit the ashram in a year now.

The Sri Sathya Sai Central Trust comprising some close aides of Sai baba is now running activities at the ashram but the absence of political visits and media focus has led to neglect. Nowadays the Prashanti Nilayam and its guest houses have become service providers for political and corporate events, instead of housing devotees. When Congress vice-president Rahul Gandhi came to Anantapur district for his walkathon in July, 2015, he used the Prashanti Nilayam to meet local Congressmen and address the media. TDP (Telugu Desam Party) and YSRC (YSR Congress) party leaders also use the spacious guest houses built by Sai baba to host prime ministers, chief ministers and industrial giants.

Since 2011, construction activities and registration of assets have also fallen in Puttaparthi. From Rs 5.6 crore in the year ending March, 2011, it dropped to Rs 2.9 crore in 2012-13 and just Rs 42 lakhs in 2016, said the sub-registrar of properties at Bukkapatnam. Nearly 800 apartments are vacant and looking for buyers and some investors have also withdrawn from the flats they had given advance for at Puttaparthi.

Gone are the days when the outskirts of Puttaparthi town were dotted with huge colonies of campers in vans and buses, which filled up empty spaces on fields for miles. Though a gram panchayat with less than 10,000 population, the Andhra Pradesh government had upgraded it to a municipality in the 1970s and created a PUDA (Puttaparthi Urban Development Authority) in 1990 converting vacant lands 50 kilometres around the town to residential and commercial zones.

Now with Sai baba gone, most builders, contractors, traders and hoteliers wear a worried look because of the fall in number of visitors. Most of the over 300 Kashmiri traders in handicrafts and artifacts who had a bustling business then have now shifted to Bangalore and Chennai. "I waited for a year for some miracle to occur and bring back business, but nothing has happened and the rich and famous have almost stopped coming, business is fading," said Mohammed Aslam Khan of Srinagar who has now set up shop at Bangalore's Jayanagar.

Many locals fear that now only monkeys, donkeys and dogs will dominate the area. Some are hopeful that Puttaparthi will bounce back to life like Shirdi. "No one knew of Shirdi till Bollywood made films about it. Puttaparthi will flourish again, but that will take a long time. I wonder if we can wait that long," said Gopala Krishna Iyer who runs a once-bustling eatery shop.

"We locals are used to such phases of inactivity as no devotees came when Saibaba was at Whitefield in Bangalore or at the Kodaikanal ashram. But now, we have a permanent off-season and sort of a ghost town in western movies without guests and devotees at Puttaparthi," said Dinakar Rao, a local advocate who has shifted to Dharmavaram for practice.

In the absence of Sai baba, liquor shops, bars, meat shops and cinema halls have descended at Puttaparthi which did not exist during his lifetime. "Things have changed, but the Sai baba legacy and the activities of the Trust are still revered," said RV Ratnakar, a Trust member and nephew of Sai baba (son of late RV Janakiram, brother of the 'godman').

Sai baba's devotees wait for his successor who, according to his prophecy, will arrive in the year 2030.

According to official reports submitted to the Andhra Pradesh government after Sai baba's death in 2011, the Trust has a fixed deposit of Rs 1,500 crore in banks and earns an annual interest of Rs 120 crore. It also received donations worth over Rs 60 crore a year. Though the Godman had institutionalised the Trust with trusted professionals like former Chief Justice of India PN Bhagwati, Supreme Court judges VR Krishna Iyer, V Balakrishna Eradi and retired Andhra Pradesh High Court judge YV Anjaneyulu, many of them have now distanced themselves from the organisation in view of the power struggle.

Interestingly and with foresight, Sai baba had stalled all attempts by relatives to corner the Trusts and the corpus. There were days when his brother Janakiram sat at the gates of the ashram and tried to interfere in the day-to-day affairs when Sai baba was sick. There are nearly 200 relatives in the extended family, who have opened restaurants, shopping malls, taxi services and become contractors in Puttaparthi, banking on his influence and cashing in on his recommendations. The only reason family was kept away from the Trust was the threat by the Andhra Pradesh government of a takeover in 2011 by invoking the Hindu Religious and Charitable Endowments Act, 1959 if the power struggle continued.

But for now, Puttaparthi awaits a miracle that will change its fortunes.